Last week, the five major broadcast television networks met in New York for their annual upfront presentations Monday, May 15 through Thursday, May 18. They introduced their fall 2017 lineups, along with new shows premiering later in the season, and let loyal viewers know if their favorite shows were coming back or not being renewed. Here are just a few highlights of the 110 hours of weekly primetime programming in the upcoming 2017-18 network offerings. All times are Central.

Cast of Marvel’s The Inhumans on ABC.

Scandal returns for a final season on Shonda Rhimes’ TGIT, following Grey’s Anatomy and preceding How to Get Away with Murder. Good news for Marvel fans, as Agents of S.H.I.E.L.D. will be returning for a full 22 episode season, but on Friday nights this time around. Agents of S.H.I.E.L.D. returns mid-season after the eight episode first season of the new series The Inhumans runs its course in the new time slot of 8pm. Originally intended to be a movie, ABC opted to bring their answer to the X-Men to the small-screen. The “Inhumans” are Marvel’s royal family, featuring King Black Bolt (Anson Mount), Queen Medusa (Serinda Swan), and Bolt’s brother Maximus (“Game of Thrones” alum Iwan Rheon). It follows Once Upon a Time, which moves to Fridays at 7pm. 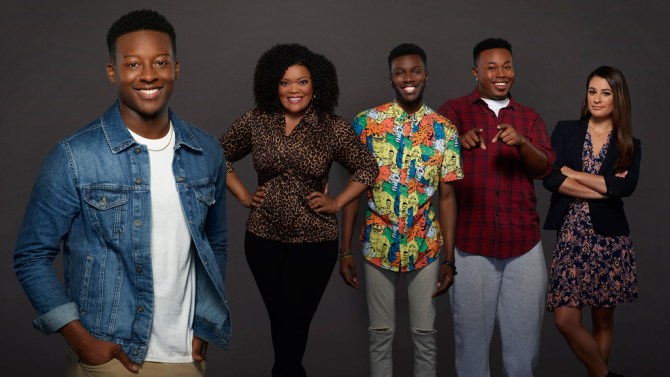 Cast of The Mayor on ABC.

Black-ish is back on ABC, followed by newcomer The Mayor, on Tuesdays from 8-9pm before returning drama Designated Survivor. On The Mayor, young rapper Courtney Rose (Brandon Micheal Hall) needs his big break. For years, he’s toiled away in a small inner-city apartment, making music in his junk-filled bedroom closet. Tired of waiting for opportunity, Cortney cooks up the publicity stunt of the century: Running for mayor of his hometown in California to generate buzz for his music career. Unfortunately for Courtney, his master plan goes wildly awry, ending in the most terrifying of outcomes: An election victory. With the help of his mother (Yvette Nicole Brown, Community) and friends, including Valentina (Glee’s Lea Michele), Courtney will have to overcome his hubris if he wants to transform the struggling city he loves. 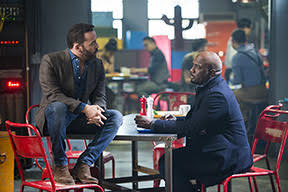 Jeremy Piven and Richard T Jones star in Wisdom of the Crowd on CBS.

The Big Bang Theory is back at 7pm, first on Mondays until November, and then on Thursdays after Thursday Night Football ends its season. New this season is its spinoff about the early days of the brillant but socially awkward theoretical physicist Young Sheldon, which follows it at 7:30pm. Elementary will return for a shortened, perhaps final, mid-season run of 13 episodes. 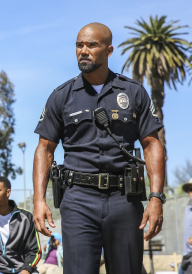 MacGyver and Hawai’i Five-O are back, back-to-back, on Fridays again, at 7pm and 8pm, respectively. on Sundays, NCIS: Los Angeles and Madam Secretary both will shift an hour, with new drama Wisdom of the Crowd, starring Richard T. Jones, moving in at 7 PM, following 60 Minutes. SWAT starring Shemar Moore airs Thursdays at 9pm beginning November 2,

Cress Williams will play Black Lightning on The CW next spring.

Supergirl is back at 7 on Mondays; The Flash returns Tuesdays at 7 and is followed by DC’s Legends of Tomorrow at 8pm. In a head-scratcher, Arrow has moved to Thursdays at 8pm (following Supernatural at 7pm) where it is up against NBC’s This Is Us, ABC’s Scandal, CBS’s Mom, and Fox’s new spaced out comedy The Orville. This must be the most brutal time slot on TV this fall. The 100 and iZombie return mid-season. “Black Lightning” will be the fifth superhero series to air on the CW — though this won’t be a part of the Arrowverse — and follows a retired superhero picking back up his mantle to fight crime in his city. He possesses the power to control electricity. “Black Lightning” starring Cress Williams as Jefferson Pierce will premiere on The CW in the Spring of 2018.

Cast of The Orville in costume on the bridge of the starship Orville on FOX.

Seth MacFarlane has done it again! The multi-talented creator of Family Guy and Cosmos: A Spacetime Odyssey has come up with a doozy — an hourlong comedy set aboard a futuristic starship where he is captain. Prepare for highjinks on an epic scale, as the show has Brannon Braga attached as a producer; Braga worked on Star Trek: the Next Generation, Star Trek: Voyager, Star Trek: Enterprise, and with MacFarlane on Cosmos: A Spacetime Odyssey  and he is givving the show a realistic spaceship look that rivals those Star Trek series. The Orville cast members include Chad Coleman and Penny Johnson Jerald as Dr. Claire Finn, one of the most accomplished physicians in the Planetary Union. Gotham moves to Thursdays at 7, and provides the lead in for The Orville at 8. Lucifer remains on Mondays and airs at 7pm before newcomer Gifted, about mutants — think X-Men.

And Fox will shift Empire to 7 p.m. on Wednesdays, to boost another series, the second season of Star, which will air at 8 p.m. Lethal Weapon will now kick off Tuesday nights, with returning comedies The Mick and Brooklyn Nine-Nine getting later time slots. Craig Robinson stars as Leroy Wright on Ghosted, a new comedy at 7:30 pm on Sundays between The Simpsons and Family Guy, about a skeptic forced to work with a firm believer of the paranormal on unexplained occurrences in Los Angeles. Ryan Murphy’s new series starring Angela Bassett about 911 operators highlights Fox’s midseason along with the return of the return of The X-Files.

The cast of Timeless return mid-season on NBC.

Good news for the fans of Timeless, who refused to let the network take their show from them. The time travel fantasy will return mid-season with 10 new episodes.