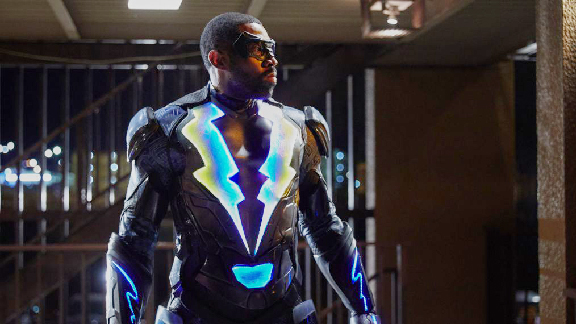 A new superhero show is coming to broadcast TV, the first with a Black superhero as the title character since M.A.N.T.I.S. (1994-95 on Fox). While we await the big screen debut of Marvel’s Black Panther in theaters February 16, Black Lightning premieres Tuesday, January 16 at 8:00 pm Central Time on The CW, locally WNAB Channel 58 in Nashville.

Black Lightning centers on Jefferson Pierce, portrayed by Cress Williams, a former superhero who returns to crime fighting because of his daughter, Jennifer. Pierce had retired from being Black Lightning nearly a decade ago after being a hero became too much of a burden on his family life. Now a high school principal, Jefferson finds himself donning his costume yet again to fight the evil gang known as The One Hundred.

This marks the first time Black Lightning has ever been adapted to live action. Previously, he’s appeared in cartoons, such as Batman: The Brave and the Bold (voiced by Bumper Robinson) and Young Justice: Invasion (voiced by Khary Payton). More recently, he made his way to the world of Injustice 2 (voiced by Ogie Banks) as a character skin for Mortal Kombat’s Raiden. In the game’s pre-fight banter, he references dealing with The One Hundred and sports a costume similar to his live action interpretation. Black Lightning has a long and ‘colorful’ history of appearances in DC Comics and elsewhere.

The Black Lightning character was created by writer Tony Isabella with artist Trevor Von Eeden. First appearing in Black Lightning #1 (April 1977), Jefferson Pierce grew up in the disreputable Southside section of Metropolis known as Suicide Slum, and becomes the principal at Garfield High School. Black Lightning is DC Comics’ first African American superheroes and the first to star in their own series for the DC imprint. Tony Isabella, an experienced writer having done work for the Luke Cage character at Marvel Comics, was signed on specifically to develop DC’s first starring black character.

Based on the characters from D.C., Black Lightning is from Berlanti Productions and Akil Productions in association with Warner Bros. Television, with executive producers Greg Berlanti (“Arrow,” “The Flash”), Salim Akil & Mara Brock Akil (“Being Mary Jane,” “The Game,” “Girlfriends”) and Sarah Schechter (“Arrow,” “The Flash”). Development on the series began in September 2016 when Fox ordered a pilot production commitment for Black Lightning. In February 2017, Fox passed on the series, with it being picked up by The CW with a new script for the pilot.

Despite airing on The CW, Mark Pedowitz, the president of The CW, said in May 2017 that the series “at this time, is not part of the Arrowverse. It is a separate situation.” Executive producer Greg Berlanti had previously stated when the series was in development at Fox that it would not crossover with his other DC Comics television properties on The CW nor would it exist in the Arrowverse. However, Akil later stated that they were not ruling out eventual crossovers. In August 2017, Pedowitz added, “If [the showrunners] wish to bring it in, that is their call. We had a long discussion with the studio, Mara, Salim and myself. We were fine with them making it separate from the Arrowverse, they have a different point a view. If they end up wanting to go that way, that will be their decision.” So, whether or not you see Black Lightning or any characters from the show appear on other CW shows like Supergirl, The Flash, Arrow, or Legends of Tomorrow, or vice versa, has yet to be determined.

Those main characters along with the actors portraying them would include China Anne McClain as Jennifer Pierce, Jefferson’s younger daughter who is an independent, outspoken scholar-athlete with a wild streak of her own; Nafessa Williams as Anissa Pierce, Jefferson’s older daughter who is in medical school and teaches part-time at Jefferson’s school; Christine Adams as Lynn Pierce, Jefferson’s ex-wife; James Remar as Peter Gambi, Jefferson’s oldest friend, who became a father figure and mentor to him, and works as his “tailor”; Damon Gupton as William Henderson, veteran detective inspector with the police, who becomes an unlikely ally to Jefferson, despite his role in the community; Marvin “Krondon” Jones III as Tobias Whale, former politician who rose through the ranks of local government through corruption brought down by Alvin Pierce, Jefferson’s father, and after killing Alvin, Tobias become the leader of The 100 gang.

The show will also occasionally feature Kyanna Simone Simpson as Kiesha, Jennifer Pierce’s best friend and the daughter of Henderson, who encourages Jennifer to challenge her perfect image; Edwina Findley as Tori Whale, Tobias Whale’s younger sister; Chantal Thuy as Grace Choi, bartender who becomes the love interest of Anissa; and Jill Scott as Lady Eve, owner of a funeral parlor who connects Tobias Whale with a secret group of corrupt leaders.