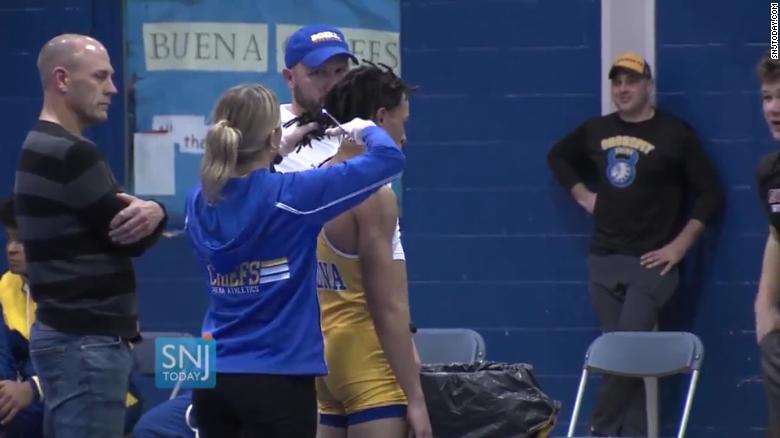 A referee told a wrestler in Buena that he couldn’t participate in a match unless he snipped his hair. (Photo: Screen capture CBS/YouTube)

In New Jersey, Andrew Johnson, an African American wrestler with dreadlocks was told he had to cut his dreadlocks or forfeit a wrestling match. Under pressure, the teenage wrestler stood resigned while a White female coach hurriedly cut his dreadlocks by ringside. The incident was captured on video by a journalist. Johnson went on to win his match.

Johnson’s teammates from Buena Regional High School can be seen on the video shouting their support and addressing him supportively before the match started.

“A referee wouldn’t allow Andrew Johnson of Buena to wrestle with a cover over his dreadlocks. It was either an impromptu haircut, or a forfeit. Johnson chose the haircut, then won by sudden victory in OT to help spark Buena to a win,” tweeted journalist Mike Frankel on December 20. Frankel is the Sports Director for SNJ Today News in South Jersey.

“Disgusting and heartbreaking. A referee known for his racism, Alan Maloney (google him), made high school wrestler Andrew Johnson cut off his dreads or lose the match. They were covered and gave him no advantage. So, he cut them off. He won the match. Never should’ve been allowed,” tweeted Shaun King regarding the incident.

Reporting by Sports Illustrated identified the referee in the video as Alan Maloney. Maloney reportedly has a dubious history. It was reported in 2016 that Maloney was accused of calling another referee the ‘N-word’ during a March, 2016 social gathering. The incident was reported in The Courier-Post Journal of South Jersey.

The level of heat seen on social media regarding the incident was palatable.

“Enough of these bastards. Ban him for life. Fire him from his job. Sue any goddamned racist idiots who defend him, into bankruptcy. Enough of this authorized return to 1938,” wrote noted sports commentator Keith Olbermann.

Comedian Drew Carey wrote, “I’m a fan of Greco-Roman wrestling, and this is total bulls****. Girls compete w boys. Anthony Robles won the NCAA’s with one leg. And this kid has to cut his dreads to compete? F**** bull****. Where was the coach? Or administrators? On either team?”

“No-loc bans are designed to oppress and shame Black people not just for expressing Blackness, but *for* their Blackness. They have no place in our society and certainly not in our schools. Until we can abolish these discriminatory practices and norms, we are all complicit,” a message from the New Jersey ACLU read.

On December 21, the New Jersey State Interscholastic Athletic Association released a statement recommending “the referee” not officiate any matches until a review of the incident was undertaken. They did not name Maloney by name.

“Regulations regarding hair length and legal hair covers for wrestlers are provided by the National Federation of State High School Associations. At this point, the NJSIAA is working to determine the exact nature of the incident and whether an infraction occurred,” their statement read.

Many in the legal communicated indicated a lawsuit is likely.

(Lauren Victoria Burke is an independent journalist and writer for NNPA as well as a political analyst and strategist as Principal of Win Digital Media LLC. She may be contacted at <LBurke007@gmail.com> and on twitter at @LVBurke).

Stand UP Nashville demands Amazon deal be fair for Nashvillians