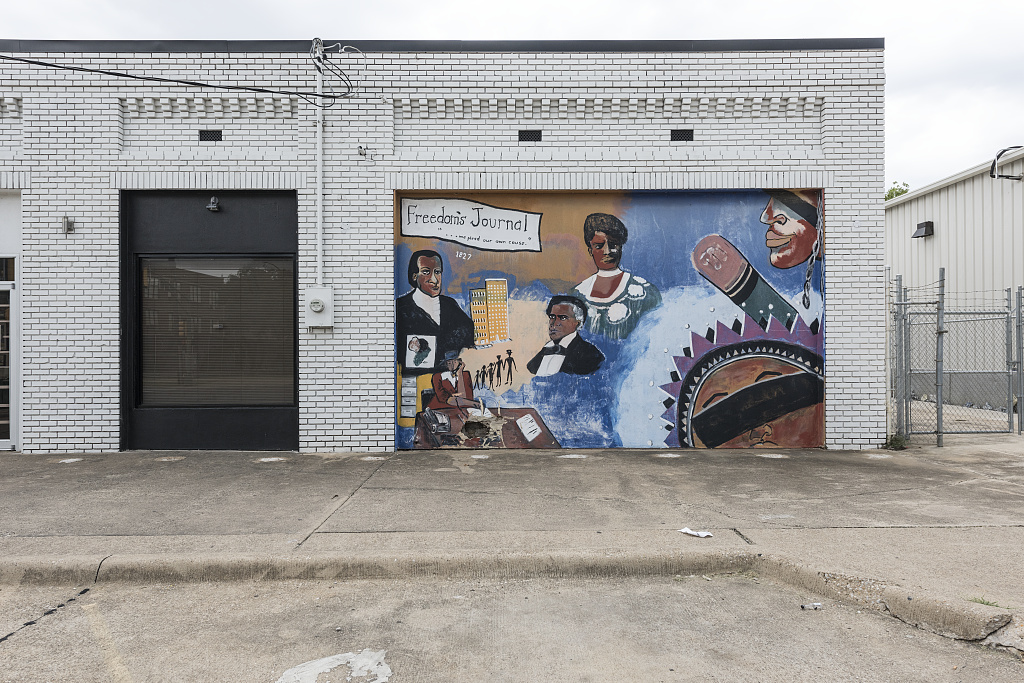 Freedom’s Journal mural outside the offices of NNPA member publisher, the Dallas Weekly, a newspaper that reports on events in the African American community in Dallas, Texas. (photo: Pinterest)

In the March 2018 story, ‘Race News: Chronicling the Black Press and Fight for Justice,’ journalist Tony Pecinovsky noted that the rocky relationship between journalism and the struggle for African American equality, like any other courtship, is full of ebbs and flows, fluctuations that often times mirror larger societal changes.

“Exploring this relationship, in all its nuance and complexity, is especially important today as we try to discern and understand contemporary reality, a reality the Trump Administration increasingly attempts to obscure and mystify with its reliance on ‘alternative facts,’ ‘facts’ that often times lack quantifiable, tangible evidence,” Pecinovsky said.

In that context, he said Fred Carroll’s book, Race News: Black Journalists and the Fight for Racial Justice in the Twentieth Century, is a welcome addition to the understanding of both journalistic and African American history.
Some historians have rightly begun to see the struggle for African American equality through the lens of the “long Civil Rights revolution.”

“Thankfully, Carroll also sees the role of ‘race news’ through the lens of a long struggle and notes that early 20th century commercial publishers proudly traced their lineage back to Black journalism’s beginnings to its very first newspaper, Freedom’s Journal, which was founded in 1827,” Pecinovsky said.

He also noted that the “Black news industry was owned, produced, and consumed primarily independent of White oversight,” thereby enabling Black journalists to “package their mission of ending racial discrimination and securing citizenship rights within a profit-oriented, objective presentation of current events designed to cater to the many interests of the largest possible Black readership.”

The Black Press remains as viable as ever.

“The Black Press is an aspect of the fabric of the Black existence in America that is not getting enough attention or support from the community,” Kisha A. Brown, the founder/CEO of Justis Connection, told NNPA Newswire.

Justis Connection is an organization committed to connecting top legal talent of color to local communities and Brown said the Black Press plays a large role in telling the stories of those communities.

She said African Americans need to honor that.

“We rally to support athletes and artists who are ‘wronged’ by the system but what we fail to honor is the voice of the Black Press that has been capturing our stories for centuries,” Brown said.

“Long before Black Twitter and online blogs, the Black Press is not only an essential voice, but it is also a historical and cultural archaeological goldmine that we must preserve.”

One of the oldest Black-owned business industries in America, The Black Press began more than 191 years ago.

On March 16, 1827, the first edition of Freedom’s Journal was published, thrusting African Americans into the bustling publishing business. At the time, Blacks in America weren’t even considered citizens, most were slaves and forbidden to read or write.

However, John Russwurm and Rev. Samuel Cornish rose up bravely, declaring that, “We wish to plead our own cause. Too long have others spoken for us.”

Dorothy Leavell, publisher of the historic Chicago Crusader newspaper and chairman of the National Newspaper Publishers Association (NNPA), said in an earlier interview that when Russwurm and Cornish established the Black Press by publishing Freedom’s Journal, they wanted to provide a voice for Black people.

The Black Press became one of the only means of communication between Black people.

“Black men and women were vilified in the New York press in the 1800s,” Leavell said. “Some White newspaper publishers sought to defend the dignity, honor and character of Black people, however, Russwurm and Cornish said they, ‘wish to plead our own cause.’”

Without the Black Press, genuine stories of African Americans would go untold, Robert W. Bogle, the publisher of the The Philadelphia Tribune, said during a recent NNPA conference.

Bogle said that only Black people could tell their stories accurately. “We are as relevant today as we were when the Freedom’s Journal said they wanted to tell our story in our words,” said Bogle.

NNPA, the Black Press of America, represents more than 215 African American owned newspapers and media companies around the country with a combined weekly subscribership of more than 22 million.

When celebrating the 190th anniversary of the Black Press in 2017, NNPA President/CEO Dr. Benjamin F. Chavis, Jr., said that March 16, 2017 is a sacred historical day in the long, multi-dimensional freedom struggle of African people in America and throughout the world, because of the courage of Russwurm and Cornish who dared first to publish the Freedom’s Journal.

Chavis said that the Black Press in America has been on the frontlines of social change in the United States for [more than 190] years. “Today, more than ever, the Black Press remains the trusted and audacious voice of Black America,” said Chavis.

“Today, the NNPA continues this irrepressible tradition of publishing truth to power. Our freedom fighting publishers are all united as we reaffirm the vital importance and relevance of the Black Press now and into the future.”
And as African Americans and others observe Black History Month, Brown said she’d like to see the Black Press continue to capture current events that aren’t borne from reports done by other media outlets.

“Tell the story of the Black entrepreneur. There are so many people who are reconnecting with the spirit of our ancestors to get our own bootstraps to pull ourselves up with,” Brown said.

“Black entrepreneurs are daring to defy the business norms in an effort to explore financial freedom and chart new territory that we can call our own.”