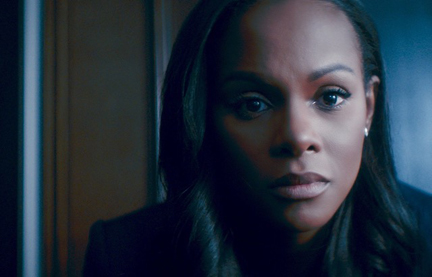 Tika Sumpter in An Accessible Loss.

Nothing about An Acceptable Loss screams, “Pay $12 bucks for me at the theatre because I’m worth it.” This isn’t an artistic breakthrough (Roma). It doesn’t expand the thriller genre (A Quiet Place). The drama on view is never deep (Leave No Trace). The ensemble performances won’t win prestigious awards (The Favourite). The screenplay by writer/director Joe Chappelle (TV’s Chicago Fire, CSI: Miami, The Wire) pulls in some topical political themes, adds touches of suspense and revenge, but the storyline never amounts to anything extraordinary—and neither does the direction.

Under the intense scrutiny of a theatrical film critique, the movie flounders. But looked at through the perspective of a smaller screen, its general intrigue will make it a better experience on-demand, streamed or on cable TV.

Controversial ex-U.S. security advisor Elizabeth ‘Libby’ Lamm (Tika Sumpter, Southside, Ride Along, Sparkle) becomes a visiting professor on a liberal college campus. Under her guidance, and at the insistence of the aggressive VPOTUS Rachel Burke (Jamie Lee Curtis, Halloween) and chief of staff Adrian (Jeff Hephner, Interstellar), a bomb was dropped during a war against terror and thousands of lives were lost.

Libby is shunned by faculty members, abhorred by some in her class, but still, at least on the outside she remains poised and at peace with her actions. One student, Martin (Ben Tavassoli, Overlord), stalks and spies on her. Why? Libby is off the grid, writing her explosive memoirs in longhand in a series of composition books and not using a cell phone. Who is she trying to evade? Is someone else tracking her?

Joe Chappelle models the Libby character on former Secretaries of Defense Robert McNamara and Donald Rumsfeld, architects of the Viet Nam and Iraq wars respectively. In hindsight, the former admitted to his blunder. The latter never took responsibility for a bogus war over weapons of mass destruction that didn’t exist.

Chappelle starts with an engrossing premise with far-reaching political implications. As a TV series director, his instincts are solid. As a theatrical filmmaker he’s unable to pan out his style and intuition onto a broader canvass.

The tech crew doesn’t help his cause. Production design (Daniel B. Clancy), sets (Jamers Hartnett), costumes (Susan Kaufmann) and cinematography (Petra Korner) make what’s on view look like a B-movie. Nothing visually stands out. Nothing is memorable.

The narrative weaves in and out, including a love affair, an allegiance between two antagonists and an assassination attempt. Those crafty devices are thwarted by a very surprisingly shallow performance by Jamie Lee Curtis, which makes all the scenes between Rachel and Libby seem hollow. Adrian’s feeble relationship with Libby would have been better left for a Cinemax late night movie. Hard to believe they are really doing the do. Flubs in basic logic add more imperfections: Libby buys a safe to protect her manuscripts and puts it in her bedroom. In broad view! Anyone can see it. Wouldn’t a really smart former government official find a hiding place?

As adversaries hound Libby, your interest gets piqued just enough over 102 minutes to carry you to the very clever ending. It’s also helpful that Martin’s motivation isn’t clear until far along into the film, which further sustains your curiosity.

Sumpter is quite beautiful and the camera loves her face. Unfortunately, the script doesn’t give her a wide range of deep emotions to play, so her slight paranoia and tepid defiance towards those who plot against her never takes the viewer to a place of extreme fear or anger.

Ben Tavassoli, as Martin, has the benefit of being an enigma. You stick with his stealth character until he is ready to reveal his motives. Alex Weisman as Martin’s confused and suspicious roommate is perfectly animated. Clarke Peters (The Wire, Three Billboards Outside of Ebbing, Missouri) is only in a few scenes as Libby’s dad, but is great.

If you see An Acceptable Loss in a movie theater, you might regret the money you spent on a ticket. Watch it on TV or a mobile device and you may stay totally absorbed.