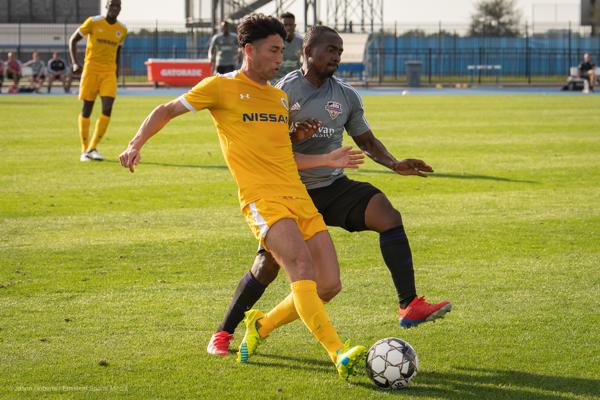 Goals by Tucker Hume and Alan Winn and some timely defensive stops were enough to propel Nashville to its first victory of the preseason.

In a preseason matchup against rivals and defending USL Cup champions Louisville City FC, Nashville Soccer Club came away with a 2-1 win at IMG Academy on Saturday afternoon.

It was Nashville SC’s first win of the preseason and forward Alan Winn had a hand in both Nashville goals on the afternoon. On Hume’s, it was Winn who was in the box that recovered the rebound from a Kharlton Belmar strike and sent it to Hume who scored. Then in the second half, Winn took a pass from Howell across the front of goal and tapped in the game-winner. Winn scored at IMG Academy last season in Nashville’s 1-1 draw against Ottawa Fury, and is familiar with the campus, having been here as a 17-year-old on the U.S. U-18 National Team.

“It was a tremendous week,” said Winn. “I love Florida. I was here when I was 17 [with the U.S. U-18 National Team]. It was beautiful then, and its beautiful now. The fields are pristine. It was good learning what we are all about. It was good getting to know my teammates outside of Nashville, and there were really good bonding moments. Leaving here with a win especially is incredible, a good high feeling, and hopefully it’ll translate to the season.”

Nashville MLS signee and USL loanee Cameron Lancaster took the field for the first time for Nashville SC in the final 30 minutes of the friendly. Lancaster did not factor into either goal, but was a presence up front for NSC in and drew plenty of attention from the Louisville defense. The moment was made more special coming against his former club where he spent four years and was a part of the last two USL Cup championships

Nashville SC forward Tucker Hume opened the preseason scoring for Nashville with his goal in the first half. Hume was Nashville’s most dangerous late season scorer last season, tallying seven goals in the final 15 games for the club, and he picked up right where he left off last season.

While the game won’t officially count for either club, it will even up the unofficial series between Nashville and Louisville. It was the fifth meeting between the teams since the beginning of last season, and the record between the teams is 2-2-1. Both teams won a game and the teams drew once during the three-game USL regular season series. Louisville beat Nashville 2-1 in the U.S. Open Cup round of 16 last year.

Nashville will be back in action this Saturday at Birmingham Legion FC in Birmingham. It will be the Legion’s first-ever home preseason game. Kickoff is scheduled for 4 pm, CST.