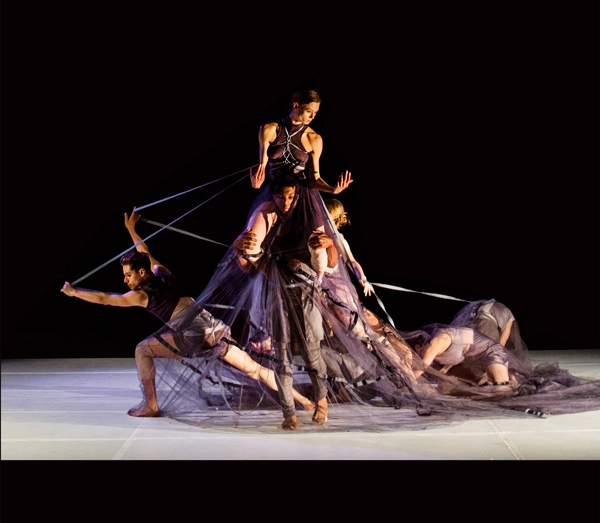 In November 2016, Nashville-based dancer, choreographer and New Dialect artistic director Banning Bouldin woke up suddenly unable to feel her legs, feet, arms, hands and torso. A devastating diagnosis of multiple sclerosis followed. But so, too, did the urge to study new skill sets that would allow her to choreograph without full use of her dancing body.

Limitation Etudes is the result. Bouldin has created a dozen Etudes in the series with more than 63 dancers nationwide. The Triangle, which will have its world premiere at OZ Arts, represents the most potent discoveries of the series.

The primary goal, Bouldin says, is to create a work that “both challenges individual and social perceptions of weakness, and illustrates new ways of construing ‘disability’ as an opportunity to uncover new strengths that could not exist without imposed systems of limitation.”

In addition to the performance by Bouldin’s nationally acclaimed contemporary dance collective, The Triangle includes collaborations in sculpture and conceptual fashion to create a surrealistic landscape for the choreography. Greg Pond, a multimedia artist, curator and professor at the University of the South, provides set design in his second collaboration with New Dialect. Tony Perrin, dancer, designer, and curator of the November 2018 OZ Arts event Ghosted, provides costume design in his first collaboration with New Dialect.

The program also includes Roy Assaf’s celebrated work Girls, performed by New Dialect in its U.S. premiere. In the piece, the Israeli choreographer considers the movements often identified with the female gender, from frailty to grace and frivolity to sexuality. Assaf made his mark touring with internationally recognized choreographer Emanuel Gat as both performer and choreographic assistant. He began independently choreographing in 2010 and has since created a number of critically acclaimed works for renowned dance companies such in Sweden, the USA, and Israel.

Mark your calendars for these upcoming events at OZ Arts Nashville: A Thousand Thoughts: A Live Documentary by Sam Green and Kronos Quartet (March 22 & 23, 2019) tells the story of one of the most influential music groups of our times—while that group performs live. Choreographer Windship Boyd and students of Glencliff High School collaborate for Papalagui Exposed (May 8, 2019), a moving performing piece that delves into modern society’s views on nature, time and money.