‘Save Energy, Save Dollars’ plan asks City Council to pay for energy upgrades for poor 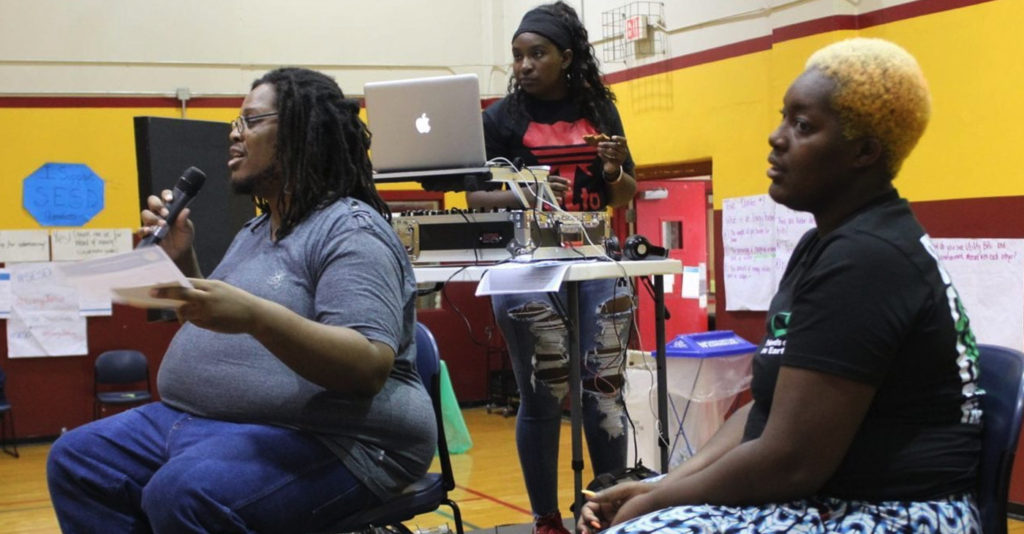 At a Friends of The Earth event at the Bickford Senior Center, activists paused to explain the “Memphis Save Energy Save Dollars” proposal. (Photo: Lee Eric Smith)

“If Memphis Light Gas & Water’s utility rates are among the lowest in the country, why is my bill so darn high?”

Whether you’ve asked yourself that question after opening your latest MLGW bill or gone a step further to complain to MLGW and/or city officials, it’s a question that seemingly defies logic. Either somebody is lying or— Your home isn’t as energy efficient as you think it is. And if the city of Memphis and MLGW seriously want to ease the energy burden on low-income families, they should start with fixing leaky faucets, sealing drafty windows and other optimizations outlined in a bold new plan recently unveiled by Friends of The Earth (FOE).

“When you talk about the energy burden, you’re talking about poor people who are making decisions between groceries, medicine and for some, even being able to get to work,” said Herman Morris, a former MLGW executive now championing the effort. “And that’s a burden not because of (the utility rate) necessarily, but because their home is energy inefficient.

The plan, called ‘Save Energy, Save Dollars,’ calls upon the Memphis City Council to fund a program that would provide energy optimizations and upgrades to up to more than 70,000 lower-income homes over five years. The plan estimates that the average participant could save as much as $44 per month, all while enjoying a more comfortable home to boot.

During the ‘direct install’ phase, trained experts would evaluate and install upgrades like low-flow showerheads, LED lights, duct sealing and insulation for pipes and water heaters. Smart thermostats are also included because they can communicate with MLGW’s smart meters to restrict usage at MLGW’s most expensive times.

Some direct install homes will also be eligible for weatherization—more costly measures like replacing inefficient refrigerators and air conditioners, upgrading insulation and even replacing windows and doors.

All other low-income households would receive a seven percent reduction in their utility bills, according to the plan.

To maximize impact, the plan takes a neighborhood-by-neighborhood approach, focusing on areas of Memphis like Frayser, Orange Mound, Whitehaven, Berclair and North Memphis. A countywide campaign would allow low-income households anywhere in the county to participate by appointment. The plan also has incentives for landlords to make the upgrades in their rental properties.

“The kilowatt hour you save is the cheapest and cleanest kilowatt hour on Earth,” said David Freeman, former chair of the Tennessee Valley Authority. “We can help ourselves in this city by just initiating a major efficiency program.”

Adopted as is, the SESD plan would cost $247 million over five years. They even recommend the city use municipal bonds to fund the effort.
But while Friends of the Earth acknowledge the plan isn’t cheap, they also say that if easing financial stress on the poorest Memphians is a priority, there’s no better way to invest the money.

“There’s been enough talk. People know they’re poor. And they know that their homes are leaking. It’s time that somebody did something about it,” Freeman said. “They borrow money to build a power plant, they can borrow money to invest in the homes of poor people. That will create more energy per dollar than what they’re paying TVA.”

Earlier this year, the Memphis City Council declined an MLGW request to raise rates to pay for needed infrastructure repairs, upgrades that could help prevent power outages during storms.

Morris said that those infrastructure upgrades are absolutely needed, but they don’t have to come at the expense of the proposed SESD plan.
“You’ve got to have an infrastructure that’s capable of delivering the energy to the people,” Morris said. “I also believe that you don’t necessarily need to stop at the door. We’re saying that you take that infrastructure argument into the homes where the energy is going to be consumed, and improve that infrastructure, so that you’re getting a more efficient delivery. You can’t really separate the two.

“[Say] you are a poor person whose lights are off because you couldn’t afford to pay for all the energy that you’re using inefficiently,” Morris continued. “If you’re a poor person in that situation and your lights off, you don’t need to fix the infrastructure—because it doesn’t matter if the infrastructure works if your lights are off because you couldn’t pay the bill.

“All we’re saying is, let’s be smart. Let’s be responsible,” he added. “Let’s just stop wasting by not having an energy-efficient envelope where that energy is consumed.”

Friends of the Earth announced the plan at a community event at Bickford Senior Center, just north of the Pinch District. There were two bounce houses, a deejay and food.

The idea is to increase public awareness – not just about the SESD plan, but to promote energy efficiency as a way of life among low-income residents.

“Some of the responsibility is on the customer,” Morris said. “That will require some changing of habits, of personal conduct. But changing habits isn’t going to help until you fix the environment.

“At MLGW, we used to call it ‘conscientious consumption’—being a better consumer,” he added.

“But to get to responsible consumption, you’ve got to make it possible for that to take place. And it cannot take place when half of every kilowatt hour you use goes out the window.”

Several dozen people attended the FOE event. Informational flyers were passed out, and guests were polled on questions like, “Which city has the highest energy burden?” The music stopped to allow event coordinator Sydney Kessler to spread information about the plan.

“We’re trying to build a strong coalition of folks that we believe can really advocate for this,” said Sydney Kessler, who organized the June 29 event. “We’re going to be talking about how it impacts those communities to make sure those communities are represented when we’re advocating for this plan.”

After multiple emails and phone calls, The New Tri-State Defender was unable to confirm if MLGW officials or the Mayor’s Office had seen the proposal or reviewed it in detail. But 10 local civic and religious organizations have already signed onto the effort urging MLGW and the City Council to adopt the plan.

And Sijuwola Crawford, the #UPTheVote901 leader who co-organized the recent “People’s Convention,” was among those at the event supporting the effort.

“We’ve heard that people are spending as much as 25% of their money on utilities,” Crawford said. “If we can lower that, then I think we’re doing what we can to protect the people who are the most vulnerable.”

If it sounds like Friends of the Earth wants to make this an issue in the upcoming municipal elections and beyond, it’s because they do.

“This is an (awareness) campaign that’s going to take it straight to these people that are running for election in October and ask them: Are you going to just keep talking about helping the poor people? Or are you going to do something about it? And here’s something that can be done by just the vote of the city council, instructing the utility to implement this program.

Expressions of Faith
P.U.S.H (Persist Until Something Happens)