Tennessee made it harder to register voters, Activists consider what’s next 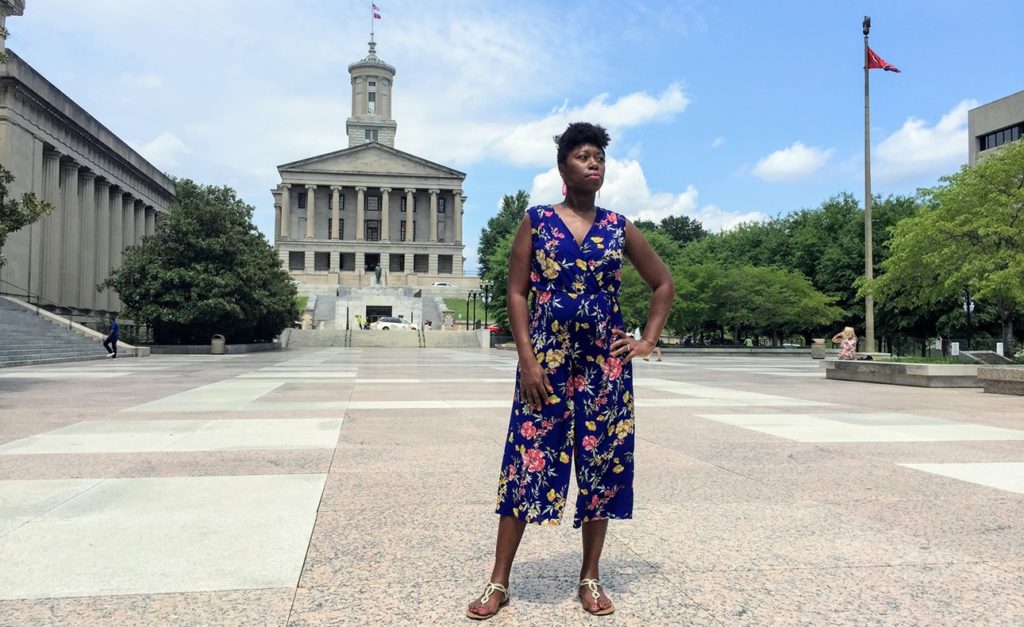 Charlane Oliver, standing in front of the Tennessee State Capitol in Nashville, helped lead a massive, statewide voter registration effort in the state. But less than a year later, voting rights activists like her are facing new restrictions and potential criminal penalties. (photo courtesy of the Pew Charitable Trusts)

Charlane Oliver didn’t expect her efforts to register thousands of Black and Brown Tennesseans to vote would lead to one of the most restrictive voter registration laws in the country.

But less than a year after a coalition of groups, led by the nonprofit Tennessee Black Voter Project, conducted a statewide voter registration drive that accumulated 91,000 applications, activists like her face a daunting obstacle: a new state law that seeks to curb mass voter registration efforts by imposing criminal and financial penalties for turning in error-filled forms or failing to register with the state and undergo training.

The new Tennessee law has nonprofits and voting rights activists scrambling ahead of the 2020 presidential election, as they attempt to understand new regulations that could lead to thousands of dollars in fines and even jail time.

“It’s going to be extremely difficult to get people registered to vote,” said Oliver, a co-founder and board president of the Equity Alliance, a nonprofit that partnered with the Tennessee Black Voter Project to register tens of thousands of voters outside churches, laundromats and grocery stores.

“That’s voter suppression,” Oliver said, as her two-month-old son Micah quietly slept beside her inside a North Nashville soul food restaurant. “It is absolutely designed to hurt our community and hurt our efforts to register people.”

The new law, which goes into effect Oct. 1, came after a massive influx of voter registration applications before the 2018 midterm elections left local election officials struggling to add new voters to the rolls and to reach out to residents who submitted incomplete or incorrect personal information. Some of those officials suspected voter fraud, alleging that canvassers filled in false information on forms and registered felons to vote to meet supposed quotas.

Republican legislators, backed by some of those officials, passed the new law in April. Just one Republican voted against it. No Democrats voted for the bill.

Jeff Roberts, the elections administrator for Davidson County, which includes Nashville, said the new law is not designed to suppress voting. If registrations are incomplete, he said, residents risk having to fill out a provisional ballot or be turned away on Election Day. Instead, the goal is to ensure there are more accurate applications.

“Our biggest challenge is trying to protect the voter,” Roberts said. “Bottom line, we’re in the business of registering people to vote.”

But with its new training requirements and potential criminal penalties, the Tennessee law could hurt voter registration drives on college campuses, said Erika Burnett, the regional program manager with the nonprofit Andrew Goodman Foundation, which gives stipends to ‘student ambassadors’ at 13 schools across the South for on-campus civic engagement.

“The disenfranchisement is real,” she said.

National voter registration organizers also are scared to conduct new registration drives at Tennessee music festivals such as Bonnaroo because of penalties associated with the new state law, according to a June report from the Tennessean. Groups like the national nonprofit HeadCount have been registering new voters at the Manchester, Tennessee-based event since 2004.

These concerns have been echoed by Democrats and voting rights activists nationwide as some Republican state lawmakers continue to tighten election laws, saying they are worried about voter fraud. The fight over ballot access has ramped up as the 2020 presidential election approaches.

A bill in Arizona this year would have criminalized paying canvassers to register voters. While it passed in the state House in March, it died later in the state Senate. In Texas, a bill that would have enacted felony penalties for voters who provide false information on voter registration forms also died.

But in Tennessee, organizations that pay canvassers could face a $2,000 fine for every county where they turn in more than 100 deficient forms. If more than 500 forms are deficient, the fine climbs to $10,000 per county. The Tennessee Black Voter Project, which paid its canvassers hourly, would be eligible for this new penalty.

Further, officials with groups that pay canvassers based on a quota system could face up to a year in prison. The law also requires all organizations that hold voter registration drives to register with the secretary of state’s office and undergo official training. If they don’t, group leaders could face a year in prison.

“I didn’t expect to be possibly jailed for this,” Oliver said. “It just takes me back to the civil rights movement. No one should have to go to jail for registering people to vote, but I will if I have to.”
Tennessee election officials are crafting new guidelines and a framework for training groups and canvassers on registering voters. Secretary of State Tre Hargett told Stateline that guidelines “are moving forward,” but would not share any further details about implementation. He has until Oct. 1 to set those guidelines, but voting rights advocates worry the state won’t launch a proper public information campaign when that happens, causing further confusion.

The law faces legal challenges from several civil rights groups, including the NAACP and the League of Women Voters of Tennessee, leaving its future even murkier.

Why do believers in Christ resist Biblical healing?