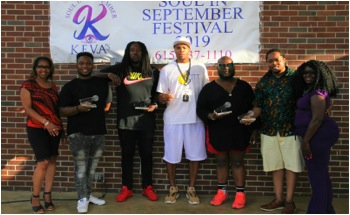 KEVA, Inc. held the first Jefferson Street Soul in September in Nashville at Hadley Park, Saturday, September 28, to highlight and honor the history of legendary musicians and singers who performed on Jefferson Street in the ‘50s and ‘60s. The Festival also provided a stage for young African American artists who are struggling to further their music careers in Music City USA to perform.

Po Boyz and Poets, The Nashville Sound Museum, and J. C. Productions supported the event. Yellow B of 92Q Radio hosted it.

Approximately 20 artists from Nashville and other states graced the stage, performing in the blazing record-breaking heat. The artists belted out songs in honor of Aretha Franklin, B.B. King, Jimmy Hendrix, Deford Bailey, and Nipsey Hussle.

Girl Mel, winner of The Aretha Franklin Award, gave thanks to KEVA, Inc. for sponsoring the event. “This is a very special entertainment platform for me,” she said. “I am honored to be a part of an event that recognizes those who shoulders I stand on today. They have carved and paved the way for me in my music career in Nashville.

“I am honored to be a part of the first Jefferson Street Soul in September,” said J. Watts. “I feel that I owe it to these legends to be here today.” J. Watts received the B.B. King Award during the event.

“This is an event that needed to happen in our community,” said Washington of the Jefferson Street Sound Museum. “The history of the music of Jefferson Street is rich, and we need to let the younger generation of artists know this great history.”

“I am glad that Po Boyz and Poets were a part of the Planning Committee,” said Mo and T.J. “We will be a part of making this event an even greater success in 2020.”

“It is important to keep our history alive and motivate the next generation of artists that they can achieve their dreams in Music City USA,” said T.J. of Po Boyz and Poets.

“We are already making plans for this event to be bigger and better next year,” said Ronae Briley, junior spokesperson for KEVA, Inc. “I gained a lot of knowledge by participating in this event. This is historical.”

“I hope to see 92Q becoming a part of the planning of this event for next year, as it is important that we share the rich history of the music, and to help build this event for 2020,” according to Yellow B of 92Q Radio.