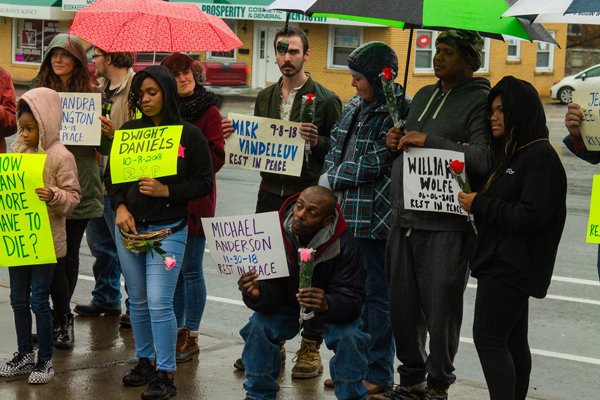 Walk Bike Nashville launch of the Impossible Crossing campaign in 2018. There have already been 26 people killed while walking in Nashville, making 2019 the deadliest year on record for pedestrians.

As of October 30, there have already been 26 people killed while walking in Nashville, making 2019 the deadliest year on record for pedestrians. Pedestrian deaths are largely preventable when cities invest in infrastructure and enforcement to prevent them.

While pedestrian deaths are on the rise nationally, cities such as New York, Los Angeles, Philadelphia, San Antonio and San Diego have seen decreases in pedestrian fatalities by investing in infrastructure and enforcement that make it safer for walking.

Studies show that the earlier onset of darkness in the fall and winter is directly tied to a spike in traffic fatalities and injuries. As we get set to roll the clocks back this weekend, bringing darkness on earlier, Walk Bike Nashville is relaunching the ‘Look for Me’ campaign, which is funded by the Tennessee Highway Safety Office. It includes radio ads to encourage drivers to take additional steps to be extra careful.

“A person is killed every 16 days while walking in Nashville. It is unacceptable that this many people are being killed walking in our city,” said Nora Kern, executive director of Walk Bike Nashville. “After daylight saving time ends, more darkness means it can be hard for drivers to see people walking until they are dangerously close. This time of year you need to exercise extra caution behind the wheel and obey the speed limit. A second of your time could save a life.”

The Look for Me campaign emphasizes that speeding greatly increases your chance of a crash with a person walking. Just a five-mile-per-hour decrease in speed can be the difference between life and death. In Nashville more than 73% of all pedestrian fatalities occur at night and more than 80% of all pedestrian fatalities occurred on state controlled arterial roads. These arterial roads, including Murfreesboro, Old Hickory, Gallatin and Nolensville Pikes, have speed limits over 30 mph, multiple lanes, few safe crosswalks and high numbers of transit riders. On these arterial roads, drivers should be looking for pedestrians.

Drivers should be aware that there could be people crossing anywhere because there aren’t a lot of crosswalks.

“Each and every person killed is a loss to our community, said Kern. “We all have a responsibility to look out for each other, stay alert at night, and slow down.”