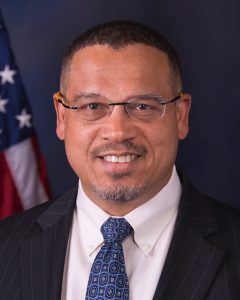 Minnesota Attorney General Keith Ellison has taken over the prosecution of ex-police officer Derek Chauvin in the murder of George Floyd, an unarmed and handcuffed African American who died because of the actions of Chauvin and other officers.

“It is with a large degree of humility and great seriousness, I accept for my office, the responsibility for leadership in this critical case involving the killing of George Floyd,” Ellison said during a news conference in Minneapolis.

“We are going to bring to bear all the resources necessary to achieve justice in this case,” he said.

“Earlier today, Gov. Walz mentioned having a human conversation with me, a dad and a Black man in pain,” Jay-Z, whose real name is Shawn Carter, wrote in a statement.

“Yes, I am human, a father and a Black man in pain, and I am not the only one. This is just a first step. I am more determined to fight for justice than any fight my would-be oppressors may have.”

Walz noted that the icon came to him “not as an international performer, but a dad, stressing to me that justice needs to be served.”

“We need justice for George Floyd,” she said. “We all witnessed his murder in broad daylight. We’re broken, and we’re disgusted. We cannot normalize this pain.”

Walz’s selection of Ellison comes as uprisings are taking place around the country and abroad. It also comes as Floyd’s family and their attorney, Ben Crump, have demanded that the other three officers involved face charges.

The family remains outraged that Chauvin is the only officer arrested so far, and prosecutors have leveled just the relatively minor third-degree murder charge against the cop.

Ellison, a former congressman from Minnesota who ran for chair of the Democratic National Committee in 2017, noted that he was accepting the lead on the case with “a large degree of humility and great seriousness.”