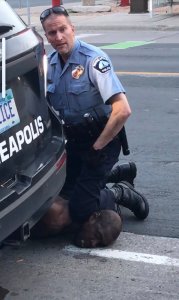 (TriceEdneyWire.com) — Dr. Narketta Sparkman-Key said she’s been crying just about every day since she saw the video of the murder of George Floyd in Minneapolis. Her tears, she said, are for the senseless, callous murder of another innocent unarmed Black person, for the constant terror that African Americans live under because of police brutality and extra-judicial murders—and a deep and persistent anxiety about her sons’ safety.

“I had to go out, walk and find other ways to give me energy and reduce the worry and fear,” she said. “Last night I started thinking about all the Black people police officers have killed. It’s triggering.”

On May 25, cops from the Minneapolis Police Department detained Floyd because they received a call that he had passed a counterfeit $20 bill. Four officers handcuffed him, held him face down on the street and for at least nine minutes one of the officers had a knee pressed on his neck. Despite Floyd’s pleas that he couldn’t breathe, pleading with the cops to allow him to stand up and his assurances that he wasn’t resisting, none of them paid him any attention. They also ignored bystanders who called on Officer Derek Chauvin to release the pressure on his neck even when it was apparent that Floyd had lost consciousness.

The death of the 46-year-old father of two sparked a wave of civil unrest around the world as well as in about two dozen states and more than 40 cities across the U.S. Many protests were peaceful. But some vented their anger and frustration and some looted and burned businesses and other structures. Chauvin was arrested May 29 and charged with third-degree murder and manslaughter.

Dr. Sparkman-Key, the mother of four sons who works as academic affairs director of Faculty Development and Retention at Old Dominion University, said her anguish has been compounded by the fear the killing has triggered in her 19-year-old.

“My son came to me crying because he is a Black man in America and he doesn’t understand why all this is happening,” she recounted. “He is 19 but will not be seen as a child, but he really is. He is scared for his family. I had to help him process what is happening in the world but I could not say everything will be okay. Instead, I said ‘you have to be cautious in every decision you make.’ It is disheartening because there are some mistakes he cannot afford to make. All the Black mothers know what I am saying. It is our reality. We worry, we pray, we cry and we carry our families.”

Sylvestre Hamilton, a 45-year-old mother of a son, said she is deeply angered by Floyd’s murder and understands the rage in Black people that has led to protests with no end in sight.

“I’m thinking about my son, my brothers, my friends and how dangerous it is to be a Black person in America,” said the historical researcher who lives in Northern Virginia. “We live in volatile times. The one stark message of hope is seeing the vast variety of people protesting.”

Hamilton said she expected to see an explosion of anger but didn’t think it would be as large and as diverse as it has been. Black people are angry and scared, tired and frustrated that those in charge have ignored their complaints and demands that they be treated fairly and more humanely by the police, who many African Americans see as an occupying force, she said.

“We really can’t breathe anymore,” Hamilton said. “I fear for my son’s life every day. I say a silent prayer whenever he leaves the house and I don’t rest until he returns,” said the West Indian immigrant who family has roots in the Eastern Caribbean. “This wasn’t an assault, a rifle attack or a shooting. This was far more merciless than a shooting. It was a horrific act, like watching someone commit a rape or a lynching.

“That officer is nothing short of a serial killer. You could see it in his eyes: no restraint, no humanity, no mercy whatsoever.”

Hamilton said she had ‘the talk” with her son when he was about 12.

“He got upset at first because he couldn’t understand why I was telling him that,” she said. “And when I gave him examples of things that had happened to Black men, he got more upset but I had to give him a realistic view of the world.”

Dr. Key-Sparkman, Hamilton and other interviewees spoke of the heavy burden racism, discrimination and inequality has on Black people, the psychic, emotional and mental damage, the incalculable cost of being denied one’s personhood and humanity, and the numbing fatigue they all feel. They said the fires burning in a raft of American cities may be the wakeup call White Americans need to begin addressing the toxic issues around race relations, but none was sure the conflagrations would produce a different result.

Meanwhile, over the years, various civil rights organizations have tried to make it easier for parents by giving advice they can pass along concerning how to conduct ones self when stopped by the police. The following are just a few things to remember:

Dr. Avis Jones-DeWeever has two sons and said she’s always tried to be honest with them about the perils and pitfalls of being Black men in America. But uncertainty lingers.

“As a mother it’s hard and it’s hard for Black mothers and fathers because we can’t protect our children,” said Jones-DeWeever, a political analyst, commentator, author and public speaker. “I am aware of society’s reaction to my sons as they transition from boys to men and I wanted to make sure they don’t blame themselves. My sons are trained in self-defense but what can you do?”

Geoffrey Philp said little will change until Whites let go of what he described as “an almost childish belief in (their) innocence.”

“America is resistant to growing up and they’re unwilling to mentally leave where they think they are and step out into the real world,” said Philp, a Jamaican poet, novelist and playwright and retired English and creative writing professor at Miami-Dade College. “To do so would require recognizing their complicity in the crimes of the nation…They act the way they do because it’s part of the conditioning. That’s how they’re brought up, how they’re raised. It’s fear of a Black planet—that’s it right there. When you demonize a people for so long, when it’s built in, baked into the system, this is what you get.”