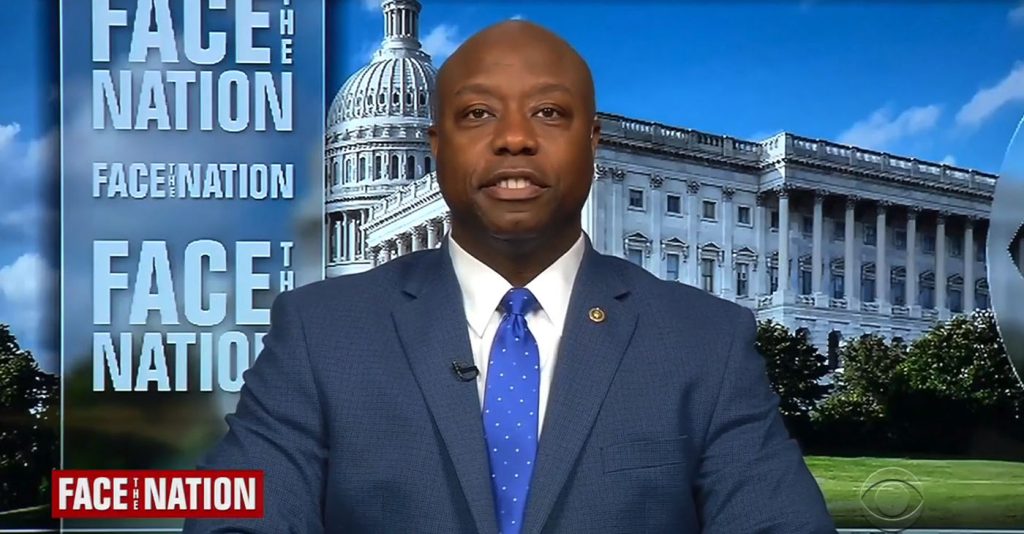 “He should take it down — there isn’t much to be said,” Sen. Scott said during a June 28 interview on “Face the Nation.” Later, on CNN, he called the tweet “indefensible” and said it should be taken down. (Photo: CBS Face the Nation [screen capture])

In yet another social media moment invoking race in America, President Donald Trump retweeted a video of a supporter heard yelling: “White power!”

The tweet displayed a video of a parade of supporters of the president riding golf carts through a retirement community in Florida called ‘The Villages.’ Detractors of the president’s were seen on a sidewalk holding signs with both groups shouting at each other.

The social media incident was yet another example of the president retweeting dubious messages from his twitter account. The tweet regarding ‘The Villages’ was later deleted after Black Republican Sen. Tim Scott expressed dismay. The Republican from South Carolina also called the video a “terrible display.”

“He should take it down. There isn’t much to be said,” Sen. Scott said during a June 28 interview on Face the Nation. Later, on CNN, he called the tweet “indefensible” and said it should be taken down.

On July 29, 2019, Trump wrote on twitter that certain Democratic congresswomen should just “go back and help fix the totally broken and crime infested places from which they came.” Trump’s remarks were targeted to four women members of Congress all of whom were minorities.

“They’re bringing drugs. They’re bringing crime. They’re rapists. And some, I assume, are good people,” Trump said as he launched his presidential campaign in New York. He would later refuse to denounce David Duke and his supporters during the campaign.

Trump claimed a judge with “Mexican heritage” should be disqualified from deciding cases against him. Trump has also retweeted false statistics claiming that African Americans are responsible for the majority of murders of White Americans. Trump appears to believe that he can appeal to the base of the Republican Party and motivate them to vote for him based on racial division.

President Trump’s messaging arrives at a time when many in America are focused on racial justice after the murder of George Floyd by a Minneapolis Police Officer on Memorial Day.

Major American companies are releasing various messages of concern regarding racial justice. On As of June 30, the Mississippi legislature is removing the Confederate battle flag from the state flag.

(Lauren Victoria Burke is an independent journalist for NNPA and the host of the podcast BURKEFILE. She is also a political strategist as principal of Win Digital Media LLC. She may be contacted at <LBurke007@gmail.com> and on twitter at @LVBurke).