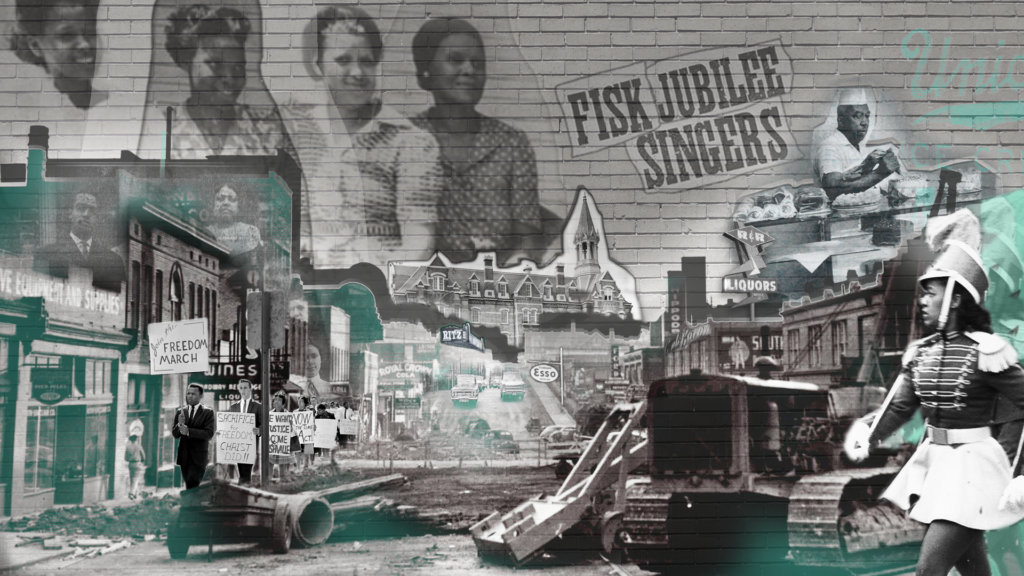 Jefferson Street is a fabled area of Nashville, known as the cultural center of the city’s African American community. Once a haven for former slaves, it is home to three iconic HBCUs: Fisk University, Meharry Medical College and Tennessee State University—schools that have educated doctors, lawyers and civic leaders. Students from these institutions led peaceful and effective civil rights protests in the 1960s. NPT’s Facing North: Jefferson Street, Nashville premiered on-air Monday, and is available online. The story of the North Nashville community is told by longtime residents and historians, as well as through archival and family photographs and film clips.

“Jefferson Street represented a cross section of what the American dream would have looked like for many African Americans coming out of slavery,” Tennessee State University’s Dr. Learotha Williams, Jr. says in Facing North: Jefferson Street, Nashville.

The documentary conveys what Jefferson Street life was like over the decades, including during segregation, highlighting the importance of home and business ownership, and spiritual life as the home of some of Nashville’s oldest Black churches. Jefferson Street’s thriving music scene of the 1940s through 1960s is also covered. Like many African American centers, this one was forever changed by Interstate construction and urban renewal programs and now struggles to balance rejuvenation with gentrification amid new economic pressures.

“I consider this production to be a social history of the Jefferson Street community,” Turner said. “It was really important to me for the story to be told authentically and organically through those who know it best.”

The documentary re-airs Friday, Sept. 25, at 7 pm on NPT; and Friday, Oct. 2, at 11 pm on NPT2. The documentary will be available for streaming at <video.wnpt.org/show/facing-north-jefferson-street-nashville>.

In Facing North: Jefferson Street, Nashville attorney and former Metro councilmember Ed Kindall recalls growing up along a vibrant Jefferson Street corridor. “You felt more welcomed here, because downtown, as you well know, some places you couldn’t sit down and eat,” Kindall said.

“Jefferson Street is one of the examples of key African American commercial streets where the history has been neglected, or lost, stolen, or strayed,” retired TSU professor Dr. Bobby Lovett says in the documentary.

Facing North: Jefferson Street, Nashville is not merely a historical account of Jefferson Street, it is also a look at the evolving community as residents confront challenge after challenge—from the construction of I-40, recent gentrification, and in this year alone natural destruction and the economic fallout of the COVID-19 pandemic. In fact, the documentary begins with Antoine Gaines surveying the damage to his house after the March 2020 tornadoes.

After the tornadoes, Elisheba Israel Mrozik helped set up a station to provide food and other assistance. “We just wanted to make sure that the people over here on this side of town are going to get what they need from the community, because they’ve been systematically neglected for so long in this area,” she said. Mrozik is the owner of One Drop Ink Tattoo, a newcomer to the area. She is determined to help preserve the community’s history and to provide support services for residents.

“None of us anticipated the March tornado or the coronavirus when this project began. But those events wound up being so reflective of the story—how outside forces, natural and manmade, have repeatedly disrupted a once stable, vibrant and culturally rich community,” Turner said.

“I know development is going to come,” said Aleathea Harris Little, the fourth generation of her family to live on Jefferson Street, in a house that belonged to her great-grandmother. “But I don’t think it should eradicate our history.

Expressions of Faith: Righteousness of Christ