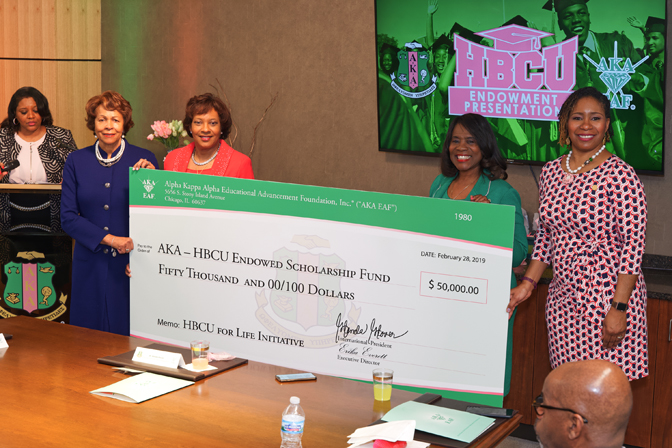 CHICAGO, Ill. — Alpha Kappa Alpha Sorority, Inc. is proud to announce that for the third consecutive year, the sorority has successfully raised $1 million in 24 hours for the benefit of Historically Black Colleges and Universities (HBCUs). The sorority’s annual HBCU Impact Day on September 21 exceeded its $1 million goal in online donations alone from local AKA chapters, private donors and corporate matching dollars from across the globe.

“We did it, we did it again!” Dr. Glenda Glover, AKA International president/CEO shared with excitement in a video message to sorority members. “The online receipts alone totaled more than $1.3 million. We can now continue to provide endowments to our treasured HBCUs.”

HBCU Impact Day is one part of a four-year $10 million fundraising goal set by Dr. Glover, who has challenged the women of AKA to lead the charge in helping to secure fiscal sustainability and success for accredited HBCUs around the country. The sorority was successfully able to reach the $1 million goal consecutively in 2018 and 2019, supporting the organization’s HBCU for Life: A Call to Action platform, which aims to promote HBCUs by encouraging students to attend and matriculate through these institutions.

Last year, AKA gifted $1.6 million to the first 32 of 96 HBCUs through the AKA-HBCU Endowment Fund. Each HBCU received $50,000 in unrestricted endowment funds as part of a phased approach to help schools reduce student debt through scholarships, fund industry-specific research, recruit and retain top faculty, and other critical operations especially during this global pandemic.

On September 20, the sorority held a virtual brunch to launch the next round of 32 HBCU endowment recipients. Four more recipients were announced: Delaware State University, Lane College, St. Phillips College, and Medgar Evers College. Four additional grants were announced on September 25, the last day of HBCU Week. The sorority will then announce 24 more recipients—six schools every Thursday for the next four weeks.

“These institutions continue to make a powerful impact in our communities and throughout our country, graduating 22% of all African Americans with bachelor’s degrees, nearly 80% of all African American judges and 50% of all Black lawyers,” said Dr. Glover, who is also the president of Tennessee State University and an HBCU graduate. “It’s gratifying to know that funds raised will establish endowments, providing sustainability to our historically black colleges and universities.”

Dr. Glover thanks everyone who contributed to the success of the 2020 HBCU Impact Day and notes that the $1.3 million raised online does not include checks in the mail and other contributions. Although HBCU Impact Day has passed, individuals or organizations interested in supporting the effort can still make contributions by texting AKAHBCU to 44321, giving by mail or online at <aka1908.com/hbcus/donate-hbcu>.

For more information on the sorority’s commitment to HBCUs, visit <www.AKA1908.com>.

(Alpha Kappa Alpha Sorority is an international service organization that was founded on the campus of Howard University in Washington, D.C. in 1908. It is the oldest Greek-letter organization established by African American college-educated women dedicated to raising the status of African Americans, particularly girls and women. Through a robust international program of service, Alpha Kappa Alpha continues to institute groundbreaking social initiatives and social service programs that transform communities for the better. Today, these include Target 1) HBCU for Life: A Call To Action; Target 2) Women’s Healthcare and Wellness; Target 3) Building Your Economic Legacy; Target 4) The Arts!; Target 5) Global Impact; and The Signature Program #CAPS. The sorority is comprised of over 300,000 members in more than 1000 graduate and undergraduate chapters in the United States and internationally. Alpha Kappa Alpha Sorority, Incorporated is a 501(c)7 organization. As a tax-exempt organization, AKA does not directly or indirectly participate in, or intervene in, any political campaign on behalf of [or in opposition to] any candidate for elective public office. For more information on Alpha Kappa Alpha Sorority and its programs, log onto <www.AKA1908.com>).

Titans-Steelers game postponed due to COVID-19