Essential elements of Nashville life, especially for our African American population, are our four HBCUs, our Historically Black Colleges and Universities. They are the American Baptist College, Fisk University, Meharry Medical College, and Tennessee State University. Let’s take a look at how each is faring this fall in coping with the pandemic.

American Baptist College is functioning this fall, the only one of the four schools without students housed on campus, however. They are conducting all coursework online this fall. One of the things ABC is known internationally for is their annual Garnett-Nabrit Lecture Series each Spring, frequently covered here in the PRIDE. Unfortunately, the 63rd annual series was not held March 16-18, 2020 as planned. The college is planning to be able to host the series once again in the Spring of 2021, but had not set a schedule at press time.

They are presenting a series of lectures this fall, however, by Zoom, the official ABC Presidential Lecture Series, featuring Jon Meacham on the late Congressman John Lewis, Oct. 19, Riggins Earl on the lat Rev. C.T. Vivian, Oct. 26 and both men speaking on both legendary ABC Alumni on Nov. 16. See the ABC website: abcnash.edu  for details and to register, or contact Phyllis Qualls at: pqualls@abcnash.edu. Serving the community, last week ABC held a daylong Voter Registration event from 10 a.m. until 7 p.m. on Friday, Oct. 2.

Fisk University has students back on campus, and is offering most coursework online. The historic University, Nashville’s first, since 1866, held its annual Jubilee Day Convocation and Pilgrimage on Tuesday, October 6, virtually this year for the first time. It featured an address by Fisk Alumna Angeline Butler, Class of 1961, along with performances by the internationally renowned Fisk Jubilee Singers. The virtual pilgrimage was to the sites of the four original Jubilee Singers buried in Nashville; Georgia Gordon Taylor and Minnie Tate Hall in Greenwood Cemetery and Ella Shepherd Moore and Mabel Lewis Imes in Nashville’s City Cemetery.

The campus welcomes visitors to its internationally acclaimed Van Vechten Gallery, by appointment only; call 615.328.8720 or email: galleries@fisk.edu. Visitors must follow safety protocols, including checking in at the Health & Wellness Tent, wearing masks at all times, and there is a maximum of 12 persons allowed in the gallery space at a time. Check out their website for information on current exhibitions: fiskuniversitygalleries.org.

Fisk University is planning to hold its 146th Commencement Ceremony outdoors this fall for their students who graduated in the class of 2020 and could not have a ceremony in the spring due to the campus shutting down in March and sending students home. The event is scheduled for 10:00 a.m. to 1:00 p.m. on Saturday, November 14 in neighboring TSU’s William Jasper Hale Stadium, outdoors and socially distanced.

Students are fired up for the inaugural season of the Fisk University Marching Bulldogs marching band; that’s right, even without a football team, the university is moving forward with organizing, practicing and planning performances. Band directors Thomas L. Spann, Jr. and MarVelous Brown are excited about the opportunities it offers. Their freshmen band scholars in the program are excited, too. Learn more about them on the Fisk website: www.fisk.edu 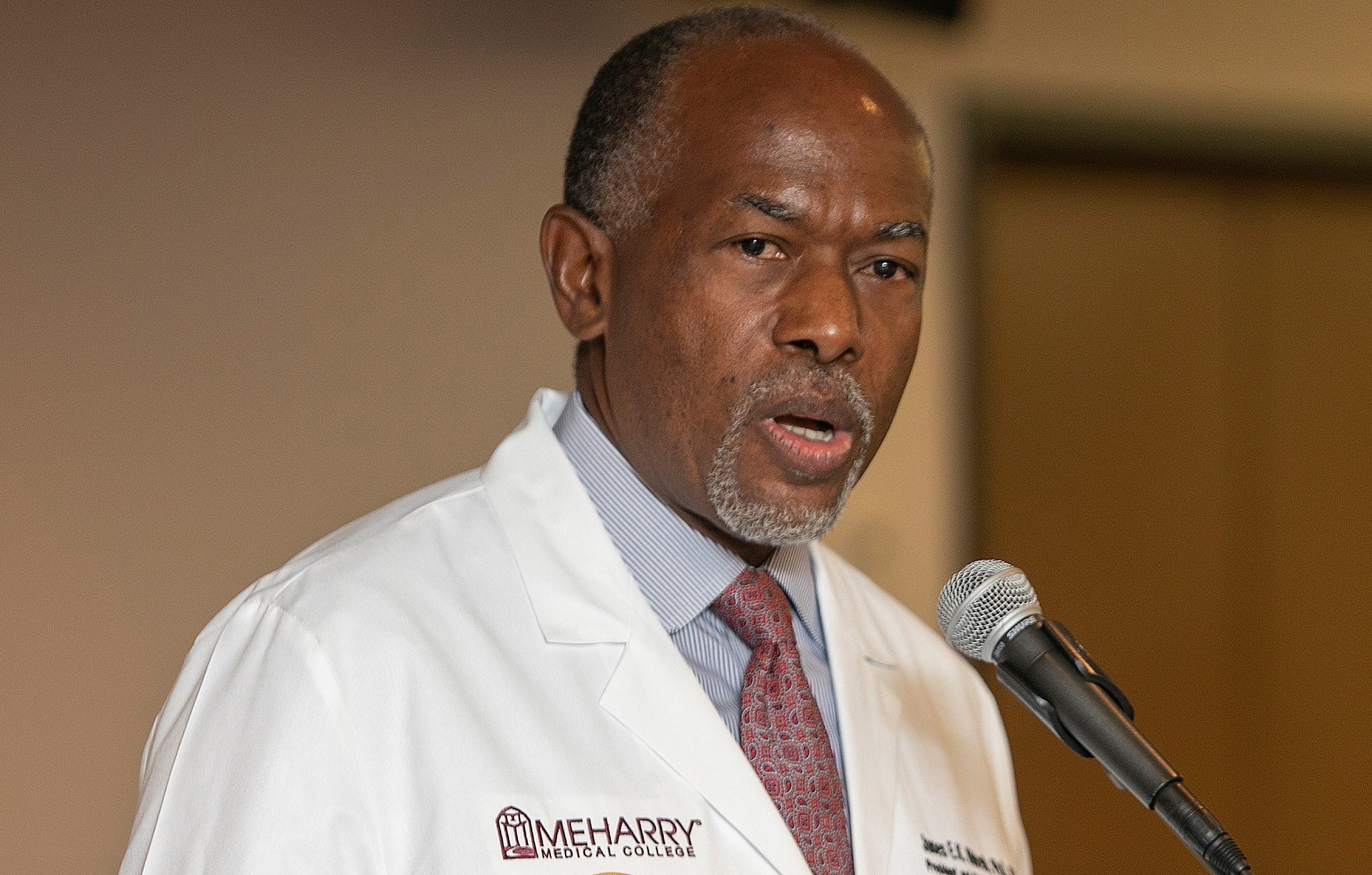 Meharry President Dr. James E.K. Hildreth has been a leading scientific voice of reason during the crisis.

Meharry Medical College and their outstanding anti-COVID19 work in the community is also addressed elsewhere in this special section. But it is worth noting that the college is engaged in providing a mix of on-campus clinical instruction along with the predominance of instruction being conducted virtually. Of note, the Dental Clinics are open again, providing needed services to patients and clinical practice experiences for fourth-year students. Call the clinic to make an appointment for dental services at 615.327.6669 or 615.327.6900.

Tennessee State University has been on top of the COVID response situation, and welcomed students back to campus this fall also. Students are housed in dormitories and campus apartments, while almost all instruction is conducted virtually, over the internet, with some notable exceptions. Among them are athletic workouts as the school, along with all their fellow Ohio Valley Conference schools, has suspended all fall competition, but is planning to compete during the Spring semester in 2021.

TSU Band Director Dr. Reginald McDonald spoke with the PRIDE for almost an hour about the Aristocrat of Bands (AoB) and its operations during the pandemic. They are one of the largest units that operates on campus and have been working hard, even without being able to perform what he calls their number one priority, which is to support the TSU football team. The students are “still excited to get together and do music,” says McDonald, affectionately known as “Doc Mac.”

The majority of instruction at TSU this fall is virtual though the end of the semester, which this year will be the week before Thanksgiving. The band began with virtual instruction on August 17 and has moved to in-person group practices and rehearsals; also performances available to view on video. Starting out with 287 participants, the AoB is currently fielding 256, including instrumentalists, majorettes (Sophisticated Ladies), flags (Royal Elegance), and drum majors (Fantastic Four). Strict protocols are in place, including temperature checks and COVID surveys, along with social distancing and bi-weekly testing. The band is not using the Frank T. Greer Band Room, instead practices are held outdoors, in Hale Stadium, with individual members spread across several sections, each 5-10 yards apart.

The band has already performed enough content to produce seven or eight high-definition videos, which will be rolled out throughout the semester, as “videos to lift the mood of our stakeholders,” says Doc Mac. Akhenjah Photos has filmed and recorded the AoB, deftly using drones to capture the scope of the group. The first of these is of the song “Mr. Loverman,” and it is quite fun to experience — visually and especially auditorily. Check out the 2020 AoB Virtual Performance Series (free) online on the tsuaristocrats Instagram on IGTV!

The AoB is optimistic that they will be able to perform in person for the public in the Spring, as scheduling and events allow. Doc Mac says the band usually travels with 6 busses, but new national collegiate band standards specify a maximum of 19 persons on each 56 passenger bus.

That translates into 15 or more busses, including directors and support staff (which included this reporter for 25 years). So if the football team plays at Nissan Stadium rather than Hale Stadium, that’s a massive (and expensive) convoy! There will be no visiting bands for OVC schools this academic year, per a conference mandate.

The band had been scheduled to participate in the January 1, 2021 Tournament of Roses Parade in Pasadena, California, but that has been rolled over to the 2022 event. This has resulted in the suspension of fund-raising activity, but start saving now to contribute next fall, or feel free to contribute to the TSU Foundation, earmarked for the Aristocrat of Bands, anytime. Note that the annual TSU Homecoming will be virtual this year, and trips to Detroit and Memphis for Classics and OVC game road trips have been canceled.

There are other band units than the marching band, and the Jazz Collegians, the Wind Ensemble, the Orchestra and String Ensembles will perform, and likely can be seen online over the coming weeks. Find more on the TSU website and AoB social media channels, or by calling the TSU Band Office or the Department of Music.