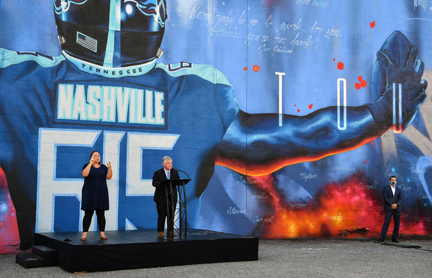 African Americans in Nashville have a long standing love affair with sports. You can go back to the early days of the Negro League baseball teams, the golf tradition of Ted Rhodes, the early football teams at Fisk University, the long history of interscholastic competition especially in basketball and football in Nashville’s segregated secondary schools until the days of desegregation in the 1960s and beyond, the winning ways of athletics at A&I (Tennessee Agricultural and Industrial State College, then University, and since 1970 Tennessee State University/TSU). In those halcyon days and throughout, the heroics of these two local colleges and the traditionally black high schools were sources of pride and to this day are important to Nashville’s black community.

Nashville is also home to the Vanderbilt Commodores, who compete in the SouthEastern Conference (SEC), the holy grail of football Saturdays in the South. Over the past twenty or so years, the Tennessee Titans franchise of the National Football League (NFL) has been a source of pride and affection as well as attendance for black Nashvillians. Additionally, Nashville is home to the National Hockey League (NHL) Nashville Predators pro hockey team, the Nashville Sounds pro baseball franchise and the Nashville Soccer professional club team, as well as Belmont and Lipscomb’s teams.

COVID-19 shut down athletic competitions in March, and it has resulted in the late start of Metro Nashville Public Schools (MNPS) high school football, the cancellation of TSU’s fall sports (especially football), and seriously impacted the Titans. Let’s see how these teams are faring as of early October.

MNPS high school football teams were cleared to play beginning on Friday, September 25, while many private schools and schools in neighboring counties had been playing since August. The MNPS schools wasted no time making a huge splash. That first night, the Game of the Week on Friday Night Rivals, televised live in high definition on WUXP Channel 30 and online, matched Pearl-Cohn Magnet High School’s Firebirds hosting Hillsboro High School’s Burros. The coaches knew each other very well, as Hillboro’s head coach Maurice Fitzgerald was head coach at Pearl-Cohn when he hired current PCHS coach Tony Brunetti as his assistant. That game was a defensive struggle, resolved in overtime, 14-7 in favor of the Firebirds after a scoreless four quarters of regulation. Last Friday night, October 2, the Firebirds visited Nashville’s East Magnet High School, once again the Game of the Week on Friday Night Rivals, and emerged victorious 42-21 against Jamaal Stewart’s Eagles. Each game featured predominately black teams, black coaches, and black principals. Beautiful! Good thing the games were televised because no fans were allowed. Fans are not allowed at MNPS games, but other juridictions have other rules, some allowing families and fans to attend.

At the college level, TSU elected not to play any football games, although they were allowed to play up to four non-conference games under Ohio Valley Conference (OVC) guidelines if they had wanted to. Looking forward to possibly playing a seven game conference schedule in the spring 2021, the conference had scratched all fall conference games, which were the predominance of the Tiger’s schedule. This resulted in canceled trips to Detroit to play Southern University on September 5 and to Memphis to play Jackson State University on September 12, both Classics against rival HBCU teams from the South Western Athletic Conference (SWAC), and a home tilt against Atlanta’s Clark Atlanta University on September 19, followed by 8 OVC games, four home and four away.

The SEC chose to mount a conference-only slate of 10 games, which began September 26 and culminates in an SEC Championship game in Atlanta on December 19. Vanderbilt traveled to Texas A&M that Saturday, losing 17-12, followed by a home game against LSU on October 3, which the Commodores lost 41-7. The University of Tennessee, in Knoxville, is a favorite of many Nashvillians and they have started their season 2-0 with wins at South Carolina and at home against Missouri, and are ranked #14 nationally at press time. The NCAA plans are for a college playoff scenario with semifinal Rose and Sugar bowl games on January 1, 2021 and a National Championship Game on Monday, January 11, 2021.

NFL teams began play without a preseason. The Titans roared out of the gate with three consecutive victories, starting the season 3-0,  sharing that rarefied air with only six other teams. The Buffalo Bills, Chicago Bears, Green Bay Packers, Kansas City Chiefs, Pittsburgh Steelers and Seattle Seahawks were also unbeaten going into Week Four of the NFL schedule.

The Titans were scheduled to host the Steelers week four on Sunday, October 4, but COVID-19 reared its ugly head and resulted in a major course correction during the young season. With several players and staffers testing positive for the virus, the league rescheduled the game for October 25. With 20 players and staffers testing positive by October 4, the NFL and the NFLPA (players association) decide to conduct an investigation into the potentially deliberate protocol variances. At press time, the 3-0 Titans team is scheduled to face those now 4-0 Buffalo Bills on October 11 after a rescheduled bye week. This may change.

To complicate matters, black Nashville sports fans were eagerly anticipating the matchup of the 2-1 New England Patriots and the 3-0 Kansas City Chiefs, originally scheduled to follow the Titans/Steelers game on CBS last Sunday. It would have featured a matchup of the league’s highest paid and arguably best player, reigning Super Bowl MVP Chiefs QB Patrick Mahomes, and fan favorite superstar QB Cam Newton, new this year in the patriots lineup. And, you guessed it, COVID-19 fouled that up, too, as Newton tested positive for the virus, becoming the highest profile athlete to succumb to date. That game was rescheduled for Monday night, October 5, nationally televised on CBS, without the aforementioned Cam Newton. The Chiefs won 26-10 and now have not lost a game since their loss to the Titans in Nissan Stadium in November, 2019.

The Ohio Valley Conference announced its regular season football schedule for the 2020-21 season on Wednesday, October 7. The proposed season will consist of seven conference games beginning on Feb. 21, 2021. The season will be played in the spring due to the postponement of the traditional fall season surrounding COVID-19 pandemic. Games will be contested on Sundays, with the exception of Easter weekend when the games will be played on Saturday.

Tennessee State will host four games at Hale Stadium in the spring, beginning with a matchup with Jacksonville State on Feb. 21. The Tigers also host Eastern Illinois on Mar. 14, UT Martin on Mar. 28 and Southeast Missouri on Apr. 11. The Big Blue will play games at Austin Peay (Feb. 28), Murray State (Mar. 21) and Tennessee Tech (Apr. 3).

The NCAA will announce the selections for a revised 16-team playoff field on Sunday, April 18. This year’s field will include 11 automatic qualifiers and five at-large bids. The first round is scheduled for the weekend of April 24 with the FCS National Championship game to be played on either May 14, 15 or 16 in Frisco, Texas.