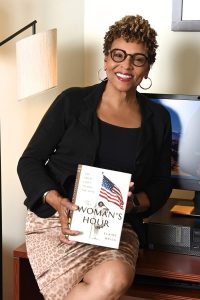 The Nashville Public Library Board of Trustees recently turned a new page in its history as Joyce Searcy, director of community relations at Belmont University, was elected as the new library board president. Searcy is the first African American to serve as president in the Library Board’s history.

“I am excited to serve the city as NPL board president because the power of the library to connect with the community, foster common ground and fuel passion for learning is more important now than ever,” Searcy said.

Searcy assumes her new role after having served as a devoted Library Board member since 2012. Searcy succeeds Keith Simmons, a former managing partner at Bass, Berry & Sims, and a founding member of the Nashville Public Library Foundation, who remains on the board. Simmons has served as chair since 2011.

In addition to Simmons and the officers, the other board members include: Kate R. Ezell, owner of Ezell Consulting; Dr. Adriana Bialostozky, assistant professor of pediatrics and clinical physician at Monroe Carell, Jr. Children’s Hospital at Vanderbilt; and Charvis Rand, head of business and innovation at the Urban League of Middle Tennessee.

“Joyce has been a committed, engaged member of the board for almost a decade,” said Nashville Public Library Director Kent Oliver. “We are honored to have her elected to this position and continue to lead the library in a positive direction as we begin opening up our services safely.”

During his time as president, Simmons was unwavering in his devotion to seeing NPL evolve as one of the finest public institutions in Nashville. Through his guidance and leadership, NPL was recognized as the 2017 Gale/Library Journal Library of the Year, and most recently, opened Votes for Women, a permanent exhibit housed in the Main Library to explore the history and ongoing impact of the 19th Amendment, in August 2020.

“Nashville Public Library is a great institution, one that binds our community together, enhances neighborhoods and contributes to educational achievement. It has been my great privilege to be associated with the library for almost 25 years,” Simmons said. “I decided that it was now time to step aside as board chair, even as I remain on the board as a loyal and participating board member, and pass board leadership along to other capable hands. I am thrilled that Joyce Searcy will be taking my place. She is an experienced board member and supporter of the library and its work.”

What Black America needs to know about COVID-19, the variants, the vaccines