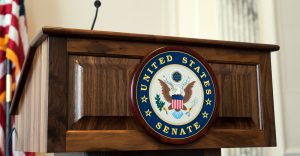 The first filibuster occurred in 1837 and was used infrequently until after the Civil War when minority parties employed the measure to stop civil rights efforts. (Photo: iStockphoto / NNPA)

The George Floyd Justice in Policing Act and a voting and ethics bill passed the Democratic-controlled U.S. House of Representatives, but neither stands a chance in the evenly divided Senate.

Reconciliation is used only in rare cases.

Lawmakers cannot use it for the George Floyd Justice in Policing Act, the voting rights and ethics measure, D.C. statehood, and other causes near and dear to many Democrats and most African Americans.

But Democrats do have a rare opportunity to get rid of the filibuster, a Senate cloture rule requiring 60 members to end debate on a topic and move to a vote.

NNPA Newswire has reached out to all 50 Senate Democrats and Independents seeking their position on the filibuster.

While some responded, others have held their positions close to the vest.

“If we want to get things done in the Senate, then we must abolish the filibuster,” said Sen. Ed Markey (D-Mass.).

“It is an antiquated, Jim Crow rule that overrides the majority and halts progress. It’s got to go.”

Nora Keefe, a spokesperson for Sen. Elizabeth Warren (D-Mass.), told NNPA Newswire in an email that Warren “is a long supporter of getting rid of the filibuster.”

Sen. Warren tweeted that the ‘For The People Act’ includes critical parts of her bill to end corruption.

“We can’t let [Sen. Minority Leader] Mitch McConnell (R-Kentucky) veto this critical bill for our democracy with the filibuster. If the Senate is going to do the things the American people expect us to do, we must abolish the filibuster.”

“The Senate needs to abolish the filibuster,” Sen. Smith tweeted over the weekend.

“It’s undemocratic, and we need to move this country forward.”

Democrats Joe Manchin of West Virginia and Kyrsten Sinema of Arizona both have opposed efforts to eliminate the filibuster.

Sen. Manchin noted he would support establishing a ‘talking filibuster’ that might require any senator objecting to ending debate to remain on the floor and speak for the entire time.

“If you want to make it a little bit more painful, make him stand there and talk, I’m willing to look at any way we can,” Sen. Manchin said. “But I’m not willing to take away the involvement of the minority.”

President Joe Biden has refused to publicly discuss whether he would seek an end to the filibuster.

He noted that the first filibuster occurred in 1837 and was used infrequently until after the Civil War when minority parties employed the measure to stop civil rights efforts.

“It is a relic of reconstruction and Jim Crow South. It was regularly used to oppress racial minorities and oppose civil rights laws,” Professor Carter wrote in an email to NNPA Newswire.

Rashad Robinson, the president of Color of Change, noted the filibuster has always stood in the way of racial progress.

“Whether employed by Southern Democrats of the Jim Crow era or the Republican Party today after a major shift in the party’s stance on racial equality,” Robinson wrote in an op-ed for USA Today.

“When you understand the filibuster’s racist past, it becomes clear that it has a racist present as well. We need to get rid of it.”

His argument is as sound as any and dates well beyond Jim Crow.

In 1922 the House passed a vital anti-lynching bill to combat the Ku Klux Klan’s worst violence, but it was filibustered in the Senate by southern Senate Democrats.

Congress tried again in 1935, but Georgia Democrat Richard Russell organized a six-day filibuster to oppose it.

Russell once said he was “willing to go as far and make as great a sacrifice to preserve and ensure White supremacy in the social, economic, and political life of our state as any man who lives within her borders.”

As Robinson wrote, the Senate’s grandest office building is now named in Russell’s honor, and Congress has never, to this day, passed an anti-lynching bill.

Lawmakers used the filibuster attempting to stop the 1957 Civil Rights Act, and, most recently, Republicans have asserted it in attempts to thwart the DREAM Act, the Affordable Care Act, and other bills that benefit communities of color.

Many have posed the question similar to David Leonhardt of the New York Times, who asked: “If forced to choose between the protection of voting rights and the protection of the filibuster, what will Democrats do?”

Leonhardt characterized his position by declaring that “it’s shaping up to be the most significant question about the new Democratic Senate.”

He noted that Republican legislators in states throughout the nation are on a mission to make voting more difficult because they believe that lower turnout helps their party win elections.

The Supreme Court (with six Republican appointees among the nine justices) has generally allowed voter restriction laws to stand.

“The filibuster hurts all of us, not just the Black community,” Robinson, of Color of Change, said. “Anyone who needs real change or help loses out to the Republican obsession with power.”

Leonhardt concluded that “there does not appear to be a compromise path on this issue. Democrats can overhaul the filibuster (and by extension, transform the Senate), ushering in an uncertain era in which both parties would be able to pass more of the legislation they favor. Or Democrats can effectively surrender on voting rights. It’s one or the other.”