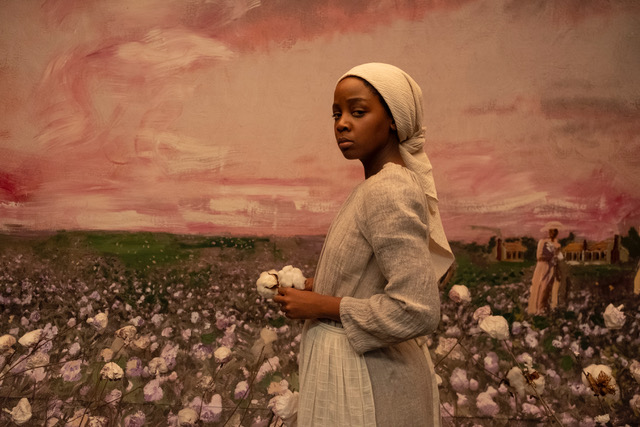 Thuso Mbedu in The Underground Railroad. (photo by Kyle Kaplan)

The award-winning novel by Colson Whitehead has been adapted for the screen by screenwriter Jihan Crowther with an assist by director Barry Jenkins, Jacqueline Hoyt, Nathan Parker, Allison Davis and Adrienne Rush. On the earth, there is constant drama and strife centered around the institution of slavery. Cora (Thuso Mbedu) is a runaway slave in a perpetual state of escape. She’s hunted by an evil White slave tracker Ridgeway (Joel Edgerton, Loving) and his diminutive, 11-year-old Black sidekick Homer (Chase Dillon). The three are involved in a violent cat-and-mouse game that plays out through Georgia, South Carolina, North Carolina, Tennessee and Indiana in the early 1800s. During this chase, Cora’s psyche resides in an inner netherworld filled with PTSD and her incessant trauma is charted in 10 episodes.

For many viewers, especially during the first five chapters, determining how long they will stick with the streaming series depends on their threshold for sadistic images, killings, child abuse, beatings, attempted rape, extremely racist language, lead characters unable to see what’s coming next and forced slave breeding. Says Cora to her mate: “We better have sex or master gonna be mad.” So, beware. Grit your teeth. Take the gut punches. Or don’t.

Experiencing this sadistic slave/master dynamic is like watching The Birth of a Nation on an endless loop. Not the tragic but inspiring one made by Nate Parker in 2016 that eventually displayed enough valor to leave behind a spirit of empowerment. It’s closer to the hopelessly cruel silent movie made by D.W. Griffith in 1915 that marveled at White supremacy and Blacks suffering like it was predestined.

Seemingly the images of corpses standing in cotton fields, people floating down holes and slaves gathering to watch other slaves lashed and burned to death may have an ulterior motive. As if dragging viewers’ emotions through a living hell will lead to epiphanies. That may be a social, psychological goal of the book and the film, but it will be curious to see if viewers feel that the emotional debt they’re ringing up ever has a justifiable payoff. There are scenes and plot devices where Blacks have created sanctuaries for runaways and opportunities for the maligned to tell their stories. But still is the crass humiliation on view ever equally balanced enough by human payback or divine retribution?

Regardless of anyone’s trepidation, a great reason to at least peek in on this series is the incredible work of the gifted artists who give this allegory their best effort. Chief among them is director/writer Barry Jenkins (Moonlight, If Beale Street Could Talk). He keeps a consistent tone and pulls the finest performances from his entire cast. His style, eye and sensibility are less like a filmmaker, more like a painter.

The cast exhibits impeccable ensemble acting, shedding light on the sympathetic and/or despicable characters. With special accolades to the three leads. Equal praise to Aaron Pierre and William Jackson Harper as Cora’s lovers. Peter Mullan for playing Ridgeway’s father and Fred Hechlinger for portraying the young Ridgeway. Sheila Atim makes Cora’s mom bright but enigmatic. While Amber Gray and Peter De Jersey embody the ultimate power couple lording over a Black utopian homestead. Says De Jersey interpreting the role of John Valentine in Episode 8 in one of the few instances of fiery rhetoric: “I would rather burn it (the farm) to the ground than give it away. If you give a White man a piece, he’s coming for all of it.”

The Underground Railroad is not like Harriet or Twelve Years A Slave, where there is a clear reward for watching misery. It’s not shallowly exploitative or shamelessly titillating like Tarantino’s Django. This ingeniously crafted ode to the enslaved is meant to share pain and enlighten. How successful it is at doing either will spark a lot of conversations. As will the debate about whether the crass humiliation on view is ever fairly balanced by any human payback or divine retribution.

Expressions of faith
Do you remember (part 3)