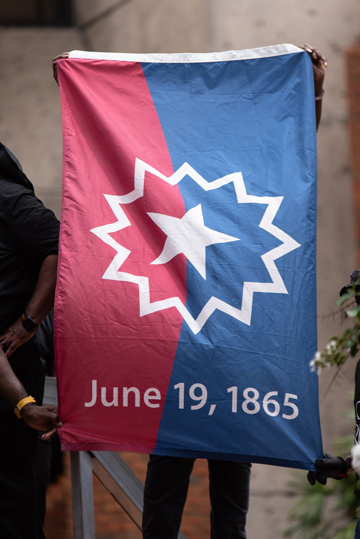 Several Juneteenth events will be happening this weekend to commemorate when Black Americans in Galveston, Texas were told that they were free. Events include a watch party, a bike ride, and a block party.

The ‘Juneteenth’ celebration marks the date (June 19) in 1865, when enslaved Black Americans in Galveston, Texas were told they were free. They were the last community of enslaved people to be informed of their liberation, more than two and a half years after President Abraham Lincoln issued the Emancipation Proclamation on Jan. 1, 1863. For more than a century and a half, Black communities have celebrated the occasion with various festivities including parades, cookouts, fireworks, beauty pageants, house parties and other activities to acknowledge a seminal moment in Black American history. In recent years, Juneteenth has garnered national recognition and celebrations in wider American communities and national recognition.

There are several events taking place throughout Nashville to commemorate the event, including:

To kick-off the Juneteenth holiday weekend, the Nashville Soccer Club will be hosting a special Juneteenth Community Watch Party.

“We’re kicking off the Juneteenth holiday weekend this Friday with a special Community Watch Party at Elizabeth Park in the heart of North Nashville,” tweeted the team, noting that it is “one of the city’s most storied communities and an area rich in African American history.”

Starting at 6 pm, the event will feature a live broadcast of the Nashville SC match as the ‘boys in gold’ take on the New York Red Bulls at Red Bull Arena at 7 pm, CT. The event will also feature the club’s IMPACT Soccer program, music, food, soccer games, giveaways, and a host of vendors providing essential community resources.

To mark the occasion, The Backline Supporters’ Collective will launch the club’s newest and first Black-led Supporters Group, The Mixtape.

The groups Black Girls Do Bike, Bike for Equality and Oasis Bike shop are holding a Freedom Day ride at 9 am at Watkins Park, 616 17th Avenue North. A 10 mile and a 25 mile route will be available for participants to choose from and those who schedule attendance with the groups ahead of time will be served lunch after the group ride.

Juneteenth 615 in a collaboration with the African American Cultural Association, will commemorate Juneteenth at Nashville’s Fort Negley Park on Saturday, June 19, from 6 pm to 10 pm. The event will feature: music, food trucks, fireworks, African drummers, dancers and musical entertainment, ‘proclamation ceremony,’ and a special appearance from Mayor John Cooper.

The Equity Alliance is hosting ‘Black on Buchanan’ block party Saturday, June 19, from 12-5 pm at 905 Buchanan Street. The event will be hosted by comedian Josh Black and will feature live music, food trucks, and a black business expo.