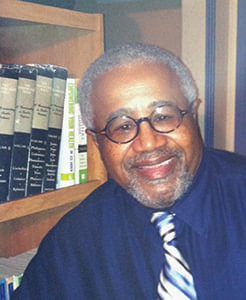 As ministers and pastors of the United Methodist Church received their new appointments to begin on June 27, Rev. Dr. Herbert L. Lester, Jr. retired after his pastorate at Clark Memorial United Methodist Church. After six years of dedicated service to the members of Clark Memorial, Rev. Lester was celebrated during his last worship service as pastor of Clark on Sunday, June 20.

The day was a celebration of three events. Along with the retirement of Rev. Herbert Lester, it was also Father’s Day and the official weekend of Juneteenth. All of this was wrapped into the worship service held in the parking lot of Clark Memorial UMC, 1014 14th Avenue North, as COVID-19 protocols were practiced. The service was also held on Zoom and Facebook Live in order for members, friends and family to join in as a ‘virtual service.’

Herbert L. Lester, Jr. began his journey in ministry after receiving a B.S. degree from Tennessee State University in 1975 and the Master of Divinity in 1986. He then earned a Doctor of Ministry from Memphis Theological Seminary in 1994. As an Elder, Dr. Lester served under appointment as a pastor in the United Methodist Church since June 1977.

Upon receiving his doctorate from Memphis Theological Seminary, Lester joined the faculty as an adjunct professor where he developed and taught classes in ‘community organizing,’ ‘missions’ and the ‘writings of Rene Girard.’ In addition, he served as a corporate consultant in staff development and worked with the Tacoma, Washington, Department of Health on issues of male violence from a cross-cultural perspective.    Lester also worked as a consultant in other areas, such as conflict resolution and as a mental health professional. He also developed a program of parenting skills training in a group therapy setting that facilitated family restoration. He later received a certification as a professional counselor in the state of Tennessee where he conducted a private counseling practice for several years.

Throughout his lifetime, Dr. Lester pastored several churches between Memphis and Nashville. While serving as a dedicated pastor, he is also a community advocate, serving on several boards currently and in the past. He encourages all church members to be actively concerned about the community and the issues of the rights of all citizens, locally and nationally.

Herbert Lester, Jr. is also a veteran who joined the United States Navy at the age of 19 years old and served aboard the USS Forrestal during the Vietnam War. During this time, he travelled the world, visiting several countries.

Rev. Dr. Lester was appointed to serve as the senior pastor of Clark Memorial UMC in June of 2015. He has been completely dedicated to all of the ministries and members of the church.

“Pastor Herbert is more than a pastor. He has been like an uncle to my daughter,” said a long-time member of Clark. “Their relationship has really helped us through some delicate times.” This is a testament to the kind of relationships Rev. Lester developed during his tenure at Clark. His absence will certainly be missed as was shown in the planning of his retirement celebration by the Staff Pastor Parish Relations Committee (SPPRC), under the leadership of Andre Lee and the Church Council along with the Worship and Celebration committee in regards to the inclusion of special recognitions and dedications added to the normal order of Sunday morning worship.

Dr. Lester delivered his final sermon as the pastor of Clark Memorial, ‘Still in one Peace,’ with his usual excitement and rich enthusiasm in sharing the word of God. Following the last remarks from Red River District Superintendent Rev. Pat Freudenthal, the worship and celebration service ended with a special dedication in the form of a video that looked back over Rev. Lester’s six years as the senior pastor of Clark Memorial United Methodist Church. Following the benediction, friends, family and members greeted Dr. Lester in a special fellowship, wishing him farewell with gifts and words of well-wishes.

Clark Memorial United Methodist Church is located at 1014 14th Ave. N. It is currently holding services on Zoom. Call the church office at 615-329-4464 for Zoom or website information.

Faith of a Mustard Seed

Expressions of faithDon’t lose it