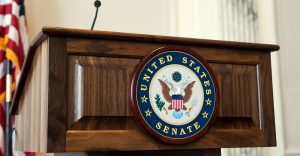 The age for Medicare likely would reduce, and Americans would realize reductions in healthcare costs while receiving expanded access to dental, vision, and hearing coverage.

“The Democratic budget will bring a generational transformation to how our economy works for average Americans,” Senate Majority Leader Chuck Schumer (D-N.Y.) said.

The budget resolution passed 50-49, with each Democrat voting for the measure and every Republican against it.

It also passed following nearly 15 hours of amendment votes and the passage of the infrastructure plan.

While there’s optimism for ultimate passage in both chambers of Congress because Democrats are using the reconciliation process for the budget, Sen. Schumer and others in his party know there remains a battle ahead.

West Virginia Democrat (and Republican-leaning) Sen. Joe Manchin already has raised the possibility that he might ultimately vote against his party on the budget bill.

“I’m concerned about the grave consequences [for the nation’s debt] as well as the ability to respond to other crises,” Sen. Manchin stated.

“Given the current state of the economic recovery, it is simply irresponsible to continue spending at levels more suited to respond to a Great Depression or Great Recession—not an economy that is on the verge of overheating.”

Sen. Kyrsten Sinema (D-Arizona) also expressed concern about the cost of the bill.

In the evenly divided Senate, Democrats need each of its members to vote in favor of the measure.

In a 50-50 tie, Vice President Kamala Harris would cast the deciding ballot.

The budget bill would accomplish a significant goal of the Biden-Harris administration, installing the first federally paid family leave program.

Funds also are earmarked for home health care, housing, job training, child nutrition, and to reduce the cost of health insurance and medication.

Investments would go toward green and sustainable housing, production and housing affordability, and workforce development.

Also, millions of immigrant workers and families would gain a path to citizenship, and the government would make “the largest one-time investment in Native American infrastructure projects,” a White House official stated.

“We still have a ways to go, but we’ve taken a giant step forward to transform America,” Sen. Schumer said.

“This is the most significant piece of legislation that’s been considered in decades.”

‘Cancer: My Journey in Time’(part 55)
Behind the masks (true identity)