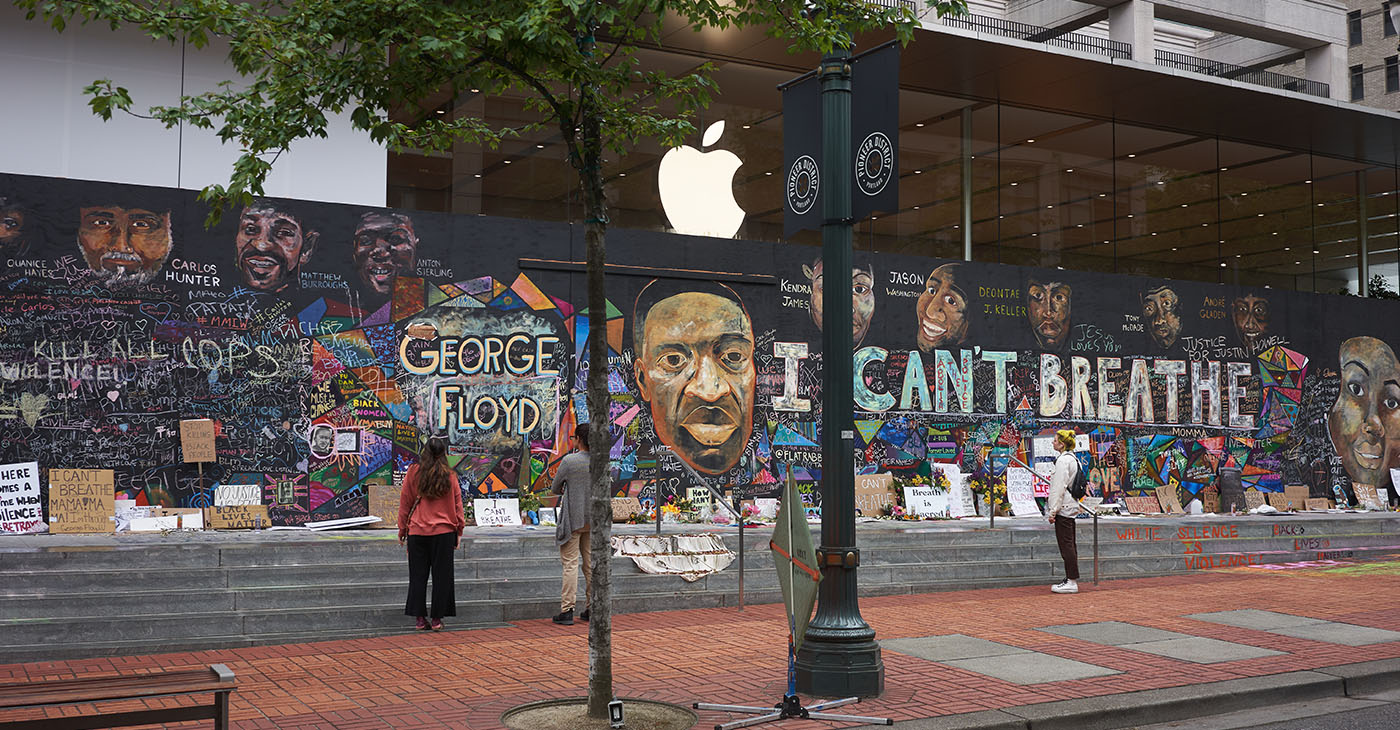 Currently, there’s no system for measuring how corporations are following through on their racial equity promises. (Photo: Portland, OR, USA – Jun 12, 2020: Passers-by stop and take a look at the boarded-up Apple Store in downtown Portland’s Pioneer Place, which has become unofficial canvases for peaceful protest. Artists have also joined to promote peace over violence. (iStockphoto / NNPA)

One year ago, after the brutal murder of George Floyd, the summer of 2020 gave us a great White awakening to the truth of systemic racism, and the big pledge to address it. For a moment, it seemed like every company had tapped their PR agents to compose pro-BLM solidarity statements and pledged big bags of money towards racial equity. The arc of American history appeared to be bending towards justice.

But then, months later, we checked the receipts and discovered that those racial equity donations were never delivered. So what happened? The same thing that usually happens. Corporations cosplay as movement allies and then go back to being unprincipled capitalists after White attention moves on.

The receipts don’t lie, even if executives do. Currently, there’s no system for measuring how corporations are following through on their racial equity promises. Most of the data publicly available only comes from the corporations themselves, and as we saw in the corporate hypocrisy surrounding Georgia’s voter suppression bill earlier this year, we know that companies will put out a nice statement and then turn around and fund the oppressive politicians creating the problem in the first place. So, it makes sense that companies want to keep their equity progress (or more accurately, lack thereof) close to their chests. Still, the data that is available paints a grim picture.

An analysis by the consulting firm Creative Investment Research finds that while 232 American companies pledged $55 billion last summer, out of their collective $746 billion in 2019 net income, only a measly $250 million has actually been spent. Not only does this fall flat in comparison to those grand promises these companies have made, but there’s virtually no data available for where that money even went.

Clearly, corporations thought they could make sweeping promises, ride out the storm, and then quietly back down when it became no longer politically popular. Public support for Black Lives Matter dropped to 48% this year, down from 61% last May. That trend is even more pronounced for White Americans. Forty-nine percent oppose BLM compared to 37% who support it, down from the peak of 43% last year.

This pattern of CEOs waxing poetic about their deep commitment to justice in public just to sit pretty on their piles of cash behind closed doors repeats across countless corporations. For example: Jamie Dimon, the CEO of JPMorgan Chase, penned a stirring message to his employees last summer announcing their pledge to equity and inclusion, and the company committed to investing $30 billion over the next five years in racial equity programs. So far, they’ve delivered just $40 million on that promise.

What makes these financial pledges even worse is that the vast majority of them are investments into intermediaries like venture capital funds and banks in the form of loans or strings-attached grants—things that ultimately serve the interests of the company making the ‘donation’ by requiring a return on investment. That’s not advancing racial equity. That’s a paternalistic PR move.

All of this matters because we have all the money and solutions we need to achieve racial equity in this country. What we lack is the will. White capitalists can edit human genes, fly to space while Earth burns, and ‘reimagine’ money as crypto and blockchains, but somehow can’t imagine, let alone fund, a better world for Black people. It’s time for these corporations to realize that they can’t buy the public’s good will with bogus ads and empty symbolism if they repeatedly fail to deliver equity for all.

If you’re living the story you’re telling in your pro-BLM PR statements, these action steps are easy.

Remember this: Black folks built this country for free. Following through on your pledged commitment to racial equity isn’t an act of benevolence. It’s the bare minimum you can do to repair the damage wrought by America’s original and ongoing sin of structural racism and refund the spoils you inherited from it.