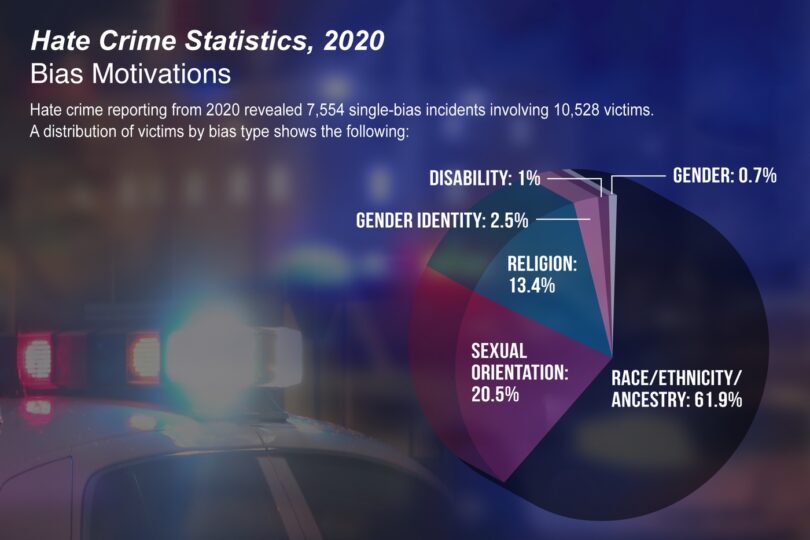 The FBI’s report revealed that of the 7,426 hate crime offenses classified as crimes against persons in 2020, 53.4% were for intimidation, 27.6% were for simple assault, and 18.1% were for aggravated assault.

Percent distribution of victims by bias type shows that 61.9% of victims found themselves targeted because of the offenders’ race, ethnicity, or ancestry.

Specifically, in its Uniform Crime Reporting (UCR) Program’s latest compilation about bias-motivated incidents throughout the nation, the FBI noted that the number of hate crimes in the United States rose to the highest level in 12 years, driven by assaults targeting Black and Asian people.

The rise in hate crimes occurred in a year of renewed protests for racial justice in the wake of the murder of George Floyd, Ahmaud Arbery, Breonna Taylor, and countless others.

“The rise in hate crimes is sad but predictable given the well-documented efforts by elected officials and political candidates to foment hate and division for partisan gain, especially during the 2020 election season and amidst the ongoing COVID-19 pandemic,” Damon Hewitt, president and executive director of the Lawyers’ Committee for Civil Rights Under Law, stated in a news release.

Hewitt noted that The Lawyers’ Committee filed several lawsuits within the last year to address hate incidents by people emboldened by an atmosphere in which blatant lies flourish and the truth often questioned.

“Our clients were assaulted by racially motivated mobs, beaten by police using racially charged language, and targeted with thousands of racist robocalls delivering misinformation,” Hewitt said. “While horrific on their own, all indications are that these incidents are still grossly underreported. Although hate crimes prey on historically disenfranchised groups, our government should treat these crimes as a threat to the very foundations of our democracy—a threat that we dismiss at our own peril.”

The FBI’s report revealed that of the 7,426 hate crime offenses classified as crimes against persons in 2020, 53.4% were for intimidation, 27.6% were for simple assault, and 18.1% were for aggravated assault.

Of the 2,913 hate crime offenses classified as crimes against property, 76.4% were acts of destruction/damage/vandalism.

Robbery, burglary, larceny-theft, motor vehicle theft, arson, and other offenses accounted for the remaining 23.6% of crimes against property.

The FBI said this crime category represents society’s prohibition against engaging in certain types of activity such as gambling, prostitution, and drug violations.

They said those crimes typically are victimless where property isn’t the object.

Other races accounted for the remaining known offenders:

Ethnicity was unknown for 47.5% of these offenders.