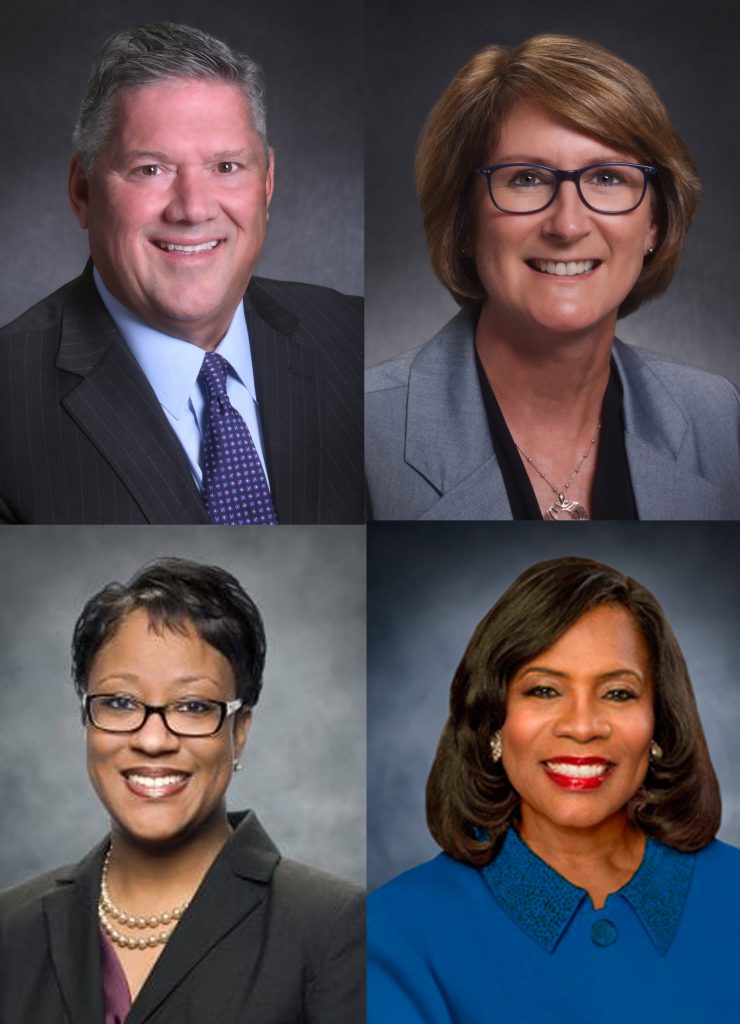 The Metropolitan Nashville Airport Authority (MNAA) Board of Commissioners has elected a new slate of officers, including: William ‘Bill’ Freeman as chairman; Nancy Sullivan, P.E. as vice-chair; and Joycelyn Stevenson, attorney, as secretary.

Freeman is chairman of Freeman Webb, Inc. a real estate investment, management and brokerage company that has grown to become the largest Tennessee-based owner/manager of multi-family and commercial properties. Prior to founding Freeman Webb, Inc. Freeman was director of Downtown Urban Development for the Metropolitan Nashville Development and Housing Agency (MDHA).

Sullivan is a founder and ‘principal engineer’ at TriAD Environmental Consultants, Inc. In her role, she is responsible for the fulfillment and execution of civil and environmental permit applications, the preparation of design plans and the oversight of construction projects for municipal, commercial and industrial facilities. As a leading expert in the environmental field, she provides effective and innovative solutions to address evolving regulations and their impact to private and public development.

Stevenson, an attorney, is executive director of the Tennessee Bar Association, where she directs and manages operations, strategic planning, staffing and program development for over 10,000 members throughout the state. Prior to her role there she was a shareholder at Littler Mendelson, P.C. and partner at Bradley Arant Boult Cummings, LLP, both Nashville law firms.

“I’m thankful for the willingness of these community leaders to dedicate their time and expertise to the development of policies that govern the operation and continued economic growth and development of both Nashville International Airport and John C. Tune Airport,” said Doug Kreulen, president/CEO of MNAA.

Additionally, Dr. Glenda Glover, president of Tennessee State University, has been appointed to its Board of Commissioners. Dr. Glover was appointed by Mayor John Cooper and unanimously confirmed by Metro Council. Dr. Glover is a former commissioner and chair of the Jackson (Mississippi) Municipal Airport Authority.

“On behalf of the Airport Authority, I extend a warm welcome to Dr. Glover,” said Bill Freeman, MNAA chairman. “Dr. Glover is a proven leader with impeccable business experience and a love for aviation, which will bring untold benefits to the Board.”

Dr. Glover was the former dean of the College of Business at Jackson State University in Mississippi, where she led the College of Business throughout the accreditation process and spearheaded the implementation of the nation’s first Ph.D. in business at a Historic Black College or University. She is a certified public accountant, an attorney, and one of two African American women in the nation to hold the Ph.D.-C.P.A.-J.D. combination. She received a bachelor’s degree in mathematics from Tennessee State University, a master’s in business administration at Clark Atlanta University, a doctorate in business from George Washington University, and she later completed her law degree at Georgetown University.

“I’m looking forward to assisting my fellow commissioners and the Airport Authority staff in their ongoing mission to be the best airport in all of North America,” said Dr. Glover. “I’m proud to serve in this role and thrilled about the great work we will do together.”

Dr. Glover has been a corporate board member of three publicly traded corporations, including Citigroup-Student Loan Corporation, Pinnacle Financial Partners and First Guaranty Bancshares. She is the author of more than 100 articles and papers and is regarded as one of the nation’s experts on corporate governance. She is a member of several professional, civic and non-profit organizations, including serving as International President of Alpha Kappa Alpha sorority, and she is the recipient of numerous awards and honors.

‘Cancer: My Journey in Time’ (part 59)
His footsteps – Doing more with less