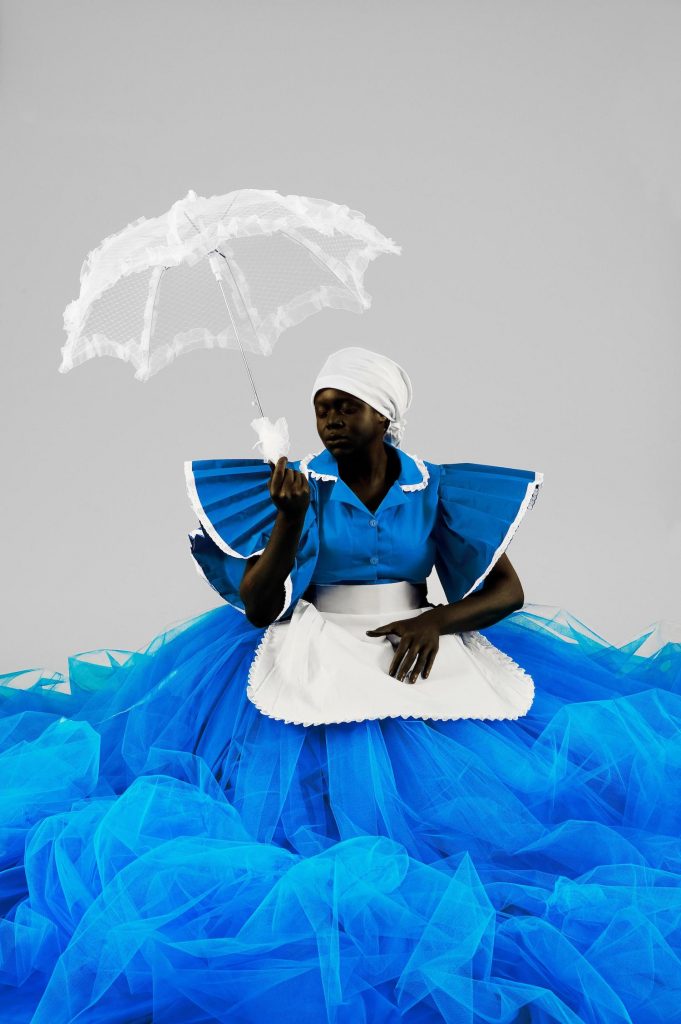 Mary Sibande: Blue Purple Red, an exhibition of the Johannesburg-based artist’s hyperrealistic sculptures and photographs that confront inequities of race, gender, politics, and economics in South Africa will be on view in the Frist’s Gordon Contemporary Artists Project Gallery from October 8, 2021, through January 2, 2022. In Sibande’s practice, the colors blue, purple, and red figure prominently in clothing worn by mannequins to reflect stages of South Africa’s political history.

“They are not ideological stances so much as motifs reflecting emotional trajectories of resignation, hope, and anger,” said Frist Art Museum chief curator Mark Scala. “Her cast of characters, typically women of color, engage in narratives that range from the subversive to the supernatural.” In sculptures and photographs, they are shown in theatrical tableaux, reflecting the artist’s background in fashion design. These costume dramas tell stories of powerful women who dream of a better life for themselves and their country.

The central character of Sibande’s work, a persona she has named Sophie, has been cast from her own face and body. She is loosely inspired by the artist’s mother, who, like many women in her family, had been a domestic worker struggling to survive at the lower end of the economy. In early work, this alter ego wears the blue and white often associated with maids’ uniforms, symbolizing one of the few types of employment that many impoverished Black South African women could obtain. Stylistically, however, Sophie’s dresses, with their Victorian excess, lace, and chiffon, recall the fancy attire of white women of leisure in nineteenth-century British South Africa.

In conversation with Scala, Sibande expressed the idea that each generation has its own unique dreams. In her work, the blue-clad apartheid-era Sophie dreams of transcending her conditions of material poverty; purple-clad Sophie from the early years of democracy dreams of achieving full selfhood. Today’s red-clad Sophie dreams that there can be no peace without justice. Sibande has suggested that the color of her future work might represent utopia, an unreachable place.

“Whatever color the costumes turn out to be, the constant will certainly be Blackness, the color of women who for Sibande embody hope and transformation,” said Scala.

Mary Sibande, born in Barberton, South Africa, in 1982, lives and works in Johannesburg. Her work has been exhibited in the South African pavilion of the Venice Biennale (2010); the Iziko South African National Gallery in Cape Town (2010); the Museum of Contemporary Art, Rio de Janeiro (2011); the Lyon Biennale (2013); the British Museum (2016); and The Met Breuer (2018). She has received the Smithsonian National Museum of Art’s African Art Award (2017) and other honors, including an Ampersand Foundation Fellowship and a Kidder Residency in the Arts at the University of Michigan.

Presented on Zoom; free; registration required. Visit FristArtMuseum.org/events to learn more. In her photographs and costumed mannequins, Mary Sibande critiques stereotypical depictions of Black South African women. She shows her characters reimagining their lives in radical ways, symbolized by fantastic costumes of her own design. Arranged in distinct color motifs, the exhibition guides viewers on an emotional journey through different periods of South African history. 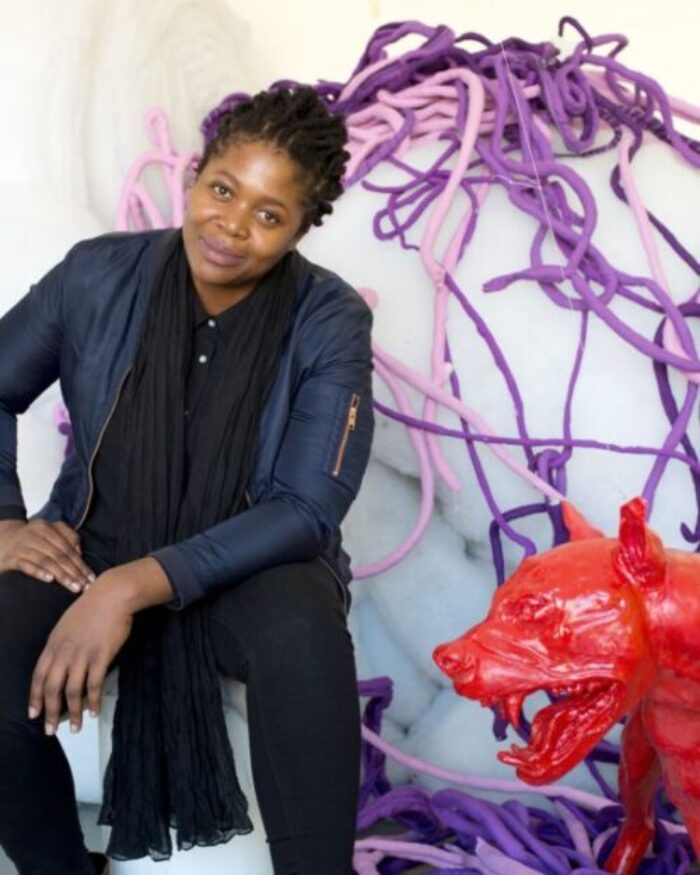 Sophie’s serene expressions and graceful gestures convey self-possession and inner strength. In such works as I’m A Lady (2009), harsh realities are momentarily veiled and softened as if in a dream. “Sophie’s eyes are always closed—‘not-seeing’ is both a symbol of defiance and of dreaming of escape from her circumstances of class and color. She does not have the demeanor of victimhood,” said Scala.

The palette then moves to purple, signifying political awakening. “In works like A Terrible Beauty is Born (2013), purple symbolizes majesty, spiritual attainment, and power, and is also a reference to a freedom march held in Cape Town in 1989, in the late years of apartheid,” said Scala. During the demonstration, police sprayed purple dye onto protesters so that later they could be easily identified and arrested. After the protest, the phrase “the purple shall govern” appeared in graffiti across the city—a play on the words “the people shall govern” in the African National Congress’s 1955 Freedom Charter. “The incident anticipated the seismic shift that occurred with the formation of a democratic government in 1994. The woman in A Terrible Beauty is Born defines the spirit of revolutionary change and renewal after apartheid ended,” said Scala.

Recent work is predominantly red, an indication of the anger felt by many South Africans at the ongoing conditions of poverty and injustice in their country. Like many South Africans, Sibande was optimistic at the idea of a state built on Nelson Mandela’s ideals of freedom, justice, and reconciliation. Yet despite these lofty aspirations, social instability, violence, and class inequities continue to vex the nation almost thirty years on.

In a 2019 interview with the African outlet Griot, Sibande said, “In South Africa violence is always around the corner, it is always lurking. I feel like South Africans are angry, there’s something that they’re not happy with and a lot of people need answers. . . . When Mandela came out of jail he said ‘No fighting,’ but people had spent years learning how to fight.” From Sibande’s perspective, the enduring animosity seems to be an inheritance that may take generations to overcome.

In the photograph Right Now! (2015), Sibande’s purple-clad protagonist does not wait for change. She dreams instead of more immediate action. “Her arm is thrust forward as if directing a pack of snarling red hounds to attack. Her eyes still closed, we remember that she is an avatar for a dreaming Sibande, who now enters a state of fury at exploitation, injustice, and the continuing disregard of women’s rights,” said Scala.

In conversation with Scala, Sibande expressed the idea that each generation has its own unique dreams. In her work, the blue-clad apartheid-era Sophie dreams of transcending her conditions of material poverty; purple-clad Sophie from the early years of democracy dreams of achieving full selfhood. Today’s red-clad Sophie dreams that there can be no peace without justice. Sibande has suggested that the color of her future work might represent utopia, an unreachable place. “Whatever color the costumes turn out to be, the constant will certainly be Blackness, the color of women who for Sibande embody hope and transformation,” said Scala.

The Equity Alliance announces The BlackPrint