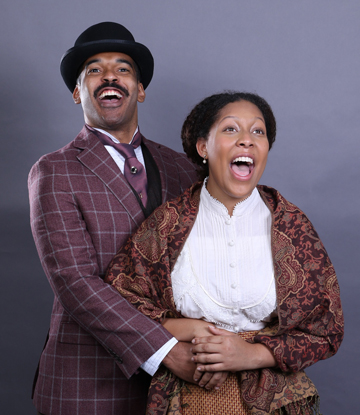 Nashville Rep presents Ragtime, the epic musical tapestry in which three families’ stories intertwine in restless New York City. A wealthy white couple, a Jewish immigrant father and his motherless daughter, and a Black ragtime musician each pursue their own version of the American Dream at the turn of the 20th century. Featuring a mix of fictional characters along with many of the celebrities and historical figures that shaped turn-of-the-century America, including Henry Ford, Booker T. Washington, Emma Goldman, Harry Houdini, J.P. Morgan, and Evelyn Nesbit, Ragtime is the ultimate exploration of the diversity of human experience.

Ragtime, the Musical features Book by Terrence McNally, Music by Stephen Flaherty, and Lyrics by Lynn Ahrens. Performances are Thursday, Nov 11 at 7:30 pm; Friday, Nov 12 at 7:30 pm; Saturday, Nov 13 at 2:00 pm and 7:30 pm; and Sunday Nov 14 at 2:00 pm. The Tennessee Performing Arts Center is located at 505 Deaderick Street, Nashville, TN 37243. . There are only 5 performances so get your tickets now at: nashvillerep.org/tickets

Please note that this production contains the use of gunshots, haze, flashing lights, racial slurs and violence.  Parental and personal discretion are encouraged.  Understanding that sensitivities vary from person to person, if you have specific questions or concerns about this production please call Nashville Rep’s office at 615-244-4878. For group ticket prices, contact TPAC Group Sales at groups@tpac.org or 615-782-4060. Late seating happens at the discretion of the house manager.

In support of Ragtime, there are these community involvement events you can participate in, as follows:

Oct 21  —  NMAAM Sips & Stanzas. This monthly, in-person program will offer a deeper dive into the music and era of Ragtime, with a cocktail hour / panel of featured experts, artists, and industry insiders to follow, 6:00 – 8:00 pm.

Nov 4  —  TPAC: Look In.  Come “look in” at what happens before the curtain goes up. Walk in to the private world of rehearsal. Learn about the creative process of the director, set designer, and costume designer. 505 Deaderick Street, 6:00 – 7:00 pm.

Light your leg lamps and grab your pink bunny pajamas because A Christmas Story makes its triumphant return to the Rep stage December 2 – December 19. The time: 1940. The place: Hohman, Indiana. A bespectacled boy named Ralphie has an active imagination and one wish for Christmas–a Red Ryder BB Gun. Constant reprimands of “You’ll shoot your eye out,” a grouchy department store Santa, and a triple-dog-dare to lick a freezing flagpole are just a few of the obstacles that stand between Ralphie and his Christmas dream. Named “Best Family Holiday Tradition” by the Nashville Scene, A Christmas Story excites the holiday spirit with sparkling wit, a heart of gold and some much-needed nostalgia.

The season will close with Mary Poppins, the production originally set for April 2020. This musical adaptation, based on the Walt Disney film and the stories of P.L.Travers, includes much of the original music from the movie plus brand new songs added for the stage. The original Broadway production was nominated for seven Tony Awards. Nashville audiences can look forward to all the magic and flying they’ve grown to expect from the world’s favorite nanny April 28-May 8, 2022 in TPAC’s Polk Theater.

The Rep also return programs such as their Ingram New Works Project, the Young Voices Monologue Competition and other community outreach efforts.