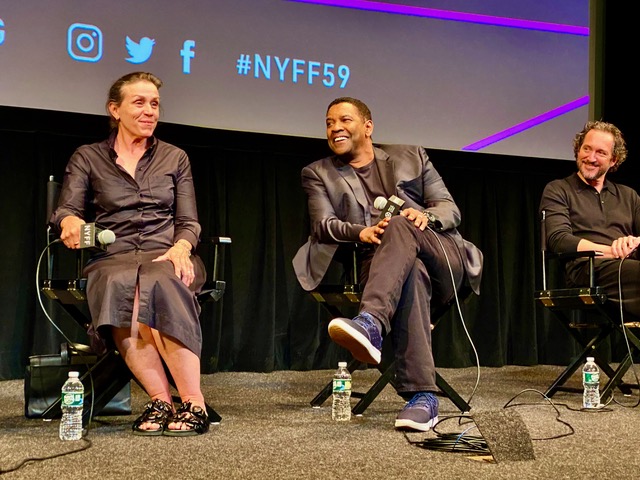 It’s a new day. In 2021 the New York Film Festival was live and in-person and exhibited a wide array of international films. Documentaries and feature films that broke new ground, showcased Black actors at their best and premiered some blockbusters that will be in movie theaters and on streaming services later this year or early 2022. Here are some of the most intriguing.

Dune (***1/2) In 1984, filmmaker David Lynch brought Frank Herbert’s 1967 cult-classic science fiction novel Dune to the big screen. It was 90% pageantry, 10% verve and a complete snore. The first 30 minutes of Canadian director Denis Villeneuve’s 2021 adaptation feels similar. It’s stunningly beautiful, but initially act/adv/dra fans will wonder: “Where’s the beef?” Lots of setup, countless characters, deadly rivalries and no action. Keep the faith. Once the footage meticulously lays out the groundwork, momentum builds and what comes is eye-catching and kinetic—like a Star Wars movie, only set among high sand dunes and not outer space.

In the year 10191, the desert planet Arrakis has been fought and lusted over for years due to one of its precious minerals. Different groups vie to run the planet, and all are led down the same path of destruction as they’re deviously manipulated by Baron Vladimir Harkonnen (Stellan Skarsgård). He pits the warring factions against each other like pawns. The latest noble family to take the bait is the House of Atreides, run by the Duke (Oscar Isaac), his heir Paul (Timotheé Chalamet) and his mother Lady Jessica (Rebecca Ferguson). With their fierce militia, they take over the planet, are tasked with harvesting the natural resources and dealing with the locals. Good luck.

Production designer Patrice Vermette, cinematographer Greig Fraser, film editor Joe Walker, costume designers Bob Morgan and Jacqueline West and composer Hans Zimmer (The Lion King) should dust off their formal wear for Oscar night. They’ll need it. What a spectacle. This is the event movie audiences have been waiting for and theaters have been coveting.

The French Dispatch (**1/2) In this quirky nod and a wink to journalism, writer/director Wes Anderson and co-writers Jason Schwartzman and Roman Coppola return to their more esoteric brand of humor (The Royal Tenenbaums). It’s almost like they’ve walked away from a more accessible formula (The Grand Budapest Hotel, $170M at the box office). Intact, is Anderson’s penchant for creating zany, odd cartoonish characters: It’s the final days of an expatriate U.S. magazine whose staff works in a satellite office in the quaint French town of Ennui-sur-Blasé. They’re all about to lose their jobs, which mimics real-life as journalists today are constantly on the precipice of unemployment. Scribes and art film fans may relate to this tedious parable. But Anderson, his crew and this inside-joke movie may have overplayed their hand with average viewers.

It’s as if Anderson told the entire cast (Jeffrey Wright, Bill Murray, Léa Seydoux, Timothée Chalamet, Benicio Del Toro and half of SAG) to act weird and maybe people won’t notice that this film is one-note. The cinematography, costumes, production design, set decoration and art direction are gorgeous and ingenious. It would have been a wonderful short film. But as a one hour and 48 minute feature film, the footage continues long after the joke is over and the punchline has been delivered.

The Tragedy of Macbeth (****) There comes a point in every year when audiences see a film they believe is this year’s masterpiece. This is that time, that film. Joel Coen (O, Brother Where Art Thou) has created a magnus opus that sets a high bar few other films vying for annual awards will reach. He reinterprets one of Shakespeare’s most famous plays, Macbeth, keeping the most pivotal parts.    Some potential viewers may have forgotten the crux of the plotting, but not the most famous lines: “Double, double toil and trouble”; “What’s done cannot be undone.”

Scottish Gen. Macbeth (Denzel Washington) is warned by three witches (Kathryn Hunt) that someday he will be king. Heeding that prophecy and egged on by his ambitious wife Lady Macbeth (McDormand), the impatient general kills the current king, becomes the new ruler and murders more people during his uncontrollable fits of paranoia. A rebellion erupts, aiming to overthrow him. Themes of greed, deception and ruthlessness mirror the U.S.’s recent political spectrum and should enthrall audiences with its timeliness. Shot in stunning black and white (cinematographer Bruno Delbonnel) with the most arresting production design (Stefan Dechant), art direction (Jason T. Clark), set decoration (Nancy Haigh) and regal costumes (Mary Zophres) vivid images from this film will mesmerize audiences as much as the penetrating dialogue, treacherous plot points and Coen’s gifted direction and writing.

Comparisons to the style of Laurence Olivier’s classic 1940s Shakespeare adaptations and early twentieth century German expressionism are noted, but Cohen’s netherworld seems unique and new in its own way—not filmed as a stage play, not set in real surroundings. When Oscar acting nominations are handed out, expect Washington’s brooding performance and McDormand’s scheming portrayal to top the lists. Award nominations should also be given to Alex Hassell as the sleezy vulture Ross, Bertie Carvel as Banquo, Moses Ingram as Lady Macduff and Corey Hawkins (Straight Outta Compton) as the brave and righteous Macduff. Every element of this work of art is beyond excellent. Who could have guessed that sheer ruthlessness could be so damn astounding?