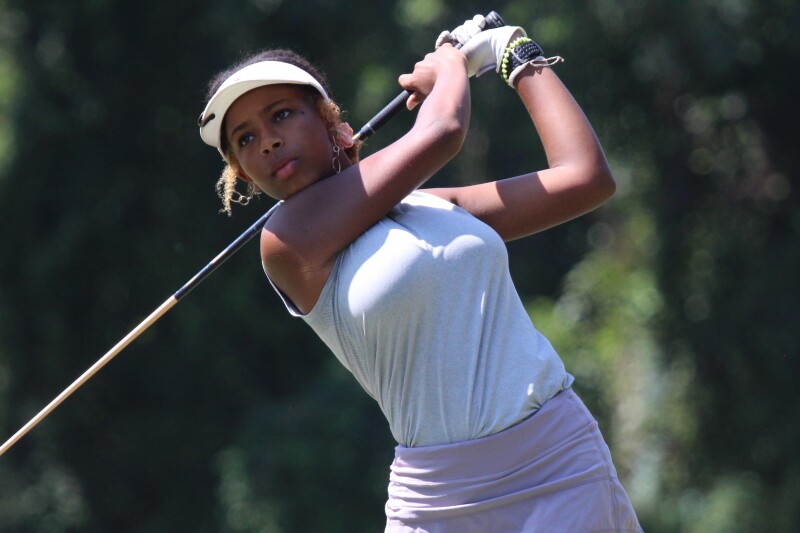 Allyn Stephens has competed in numerous American Junior Golf Association events, as well as the national finals of the Drive, Chip and Putt competition at one of the game’s most iconic clubs, Augusta National. Plenty of high school tournaments, too.

She even partnered with Michael Allen at the 2019 PURE Insurance Championship, a team competition that pairs First Tee members with PGA TOUR Champions veterans at venerable Pebble Beach, no less.

But the Mack Champ Invitational in March was different. Very different.

For once on a golf course, Stephens wasn’t in the minority. As the talented teenager looked around Memorial Park Golf Club in her native Houston that week, she saw lots of other Black and Brown golfers competing in the inaugural MCI.

“It was huge,” Stephens said. “It was so like mind blowing to see so many young people of color playing golf in the same tournament. It’s not normal to see something like that so it was a beautiful sight.”

Stephens, who plans to play golf at Texas A&M next year, estimates that before she competed in the Mack Champ Invitational she might have known two or three other Black golfers her age and “they lived in states that were like 2,000 miles away from me.”

That changed at historic Memorial Park where 109 golfers from diverse backgrounds gathered for the unique event hosted by the Cameron Champ Foundation. It’s the same course where the PGA TOUR’s best will play this week at the Hewlett Packard Enterprise Houston Open.

The golfers competing in the MCI represented 26 states, as well as Canada and Costa Rica. Entries for 2022 close on December 1 and already over 170 kids have applied, which is about 50 more than last year. Stephens, who loves watching Rory McIroy, Matt Wolff, Brooks Koepka, Ariya Jutanugarn and Nelly and Jessica Korda play, will be back for the second year.

“I basically think it’s insane to see,” said Stephens, who was the only Black golfer competing in the DCP at Augusta National back in 2018. “I honestly didn’t think that there were that many people of color who played golf at that level. So, I mean, it was great.”

Mack Champ, who died in 2019 at the age of 78 after battling stomach cancer, would certainly have been happy to hear Stephen’s assessment. His son, Jeff, who is Cameron’s father, says his dad, who learned to play golf while serving in the military, is still “always talking to me” and he knows he would be proud of the way his grandson is giving back.

“My dad’s always been that kind of person and our whole family [is, too],” said Jeff Champ, who combed the internet and social media to find talented minority golfers deserving of invitations to the tournament. “It’s one of those things. So many people help helped us get Cameron to that point to where we have to help the next kids out.”

Kids like Stephens, whose family survived the trauma of Hurricane Harvey that left four feet of water standing in their two-story house and kept them away from home for months. She started playing golf at the age of seven, then took a two-year hiatus before getting hooked again when her dad, Joe, who played for the Houston Rockets and is a single digit handicap, put a putting green in the backyard.

Stephens joined First Tee-Greater Houston, which has nine chapters, serving more than 1,000 kids, including one at Memorial Park that offers programs four days a week. Her goals now are winning a national championship at Texas A&M, which is where she found out later that Cameron Champ went to school; and turning pro, although earning her degree in biomedical science is a solid back-up plan.

“The whole time really stands out,” Stephens said when asked about the MCI. “I met so many great people. I connected with a lot of people I hadn’t seen in a while. The whole tournament was a great experience.”

Cameron Champ, the three-time PGA Tour winner who is himself bi-racial, was a hands-on host at the MCI. Over the course of the three days, he held a clinic, fielded questions from the kids, signed autographs, posed for pictures and gave out the trophies. The parents listened closely, as well.

“It’s really neat because Cam can relate to those kids,” Jeff Champ said. “He was one of those kids at one time. And one of the biggest things for our family is to share our knowledge. If I just keep everything that we’ve learned to myself, I don’t know what I would do with myself, you know?

“So we have to share our experiences, share the hard work and also explain to these families what we went through to where they understand all the different pieces. And then they have to decide what’s the best situation for their family, because every family is different.”

Lee Elder, the first Black golfer to compete in the Masters, was a virtual speaker at the banquet. Cameron Champ made his debut at Augusta National in 2020.

“This is just a start for us,” Cameron Champ said that week. “Obviously we want to grow from this year each and every year and make it bigger and better for the kids. It’s all for the kids.

“It’s all for their exposure—just giving them, like I said, a fun environment and to play against competition their age that are just as good as them. But then also for the ones that have success during the week, there’s also other opportunities for them to play even bigger and better events.”

Concert disasters like Astroworld have occurred far too often