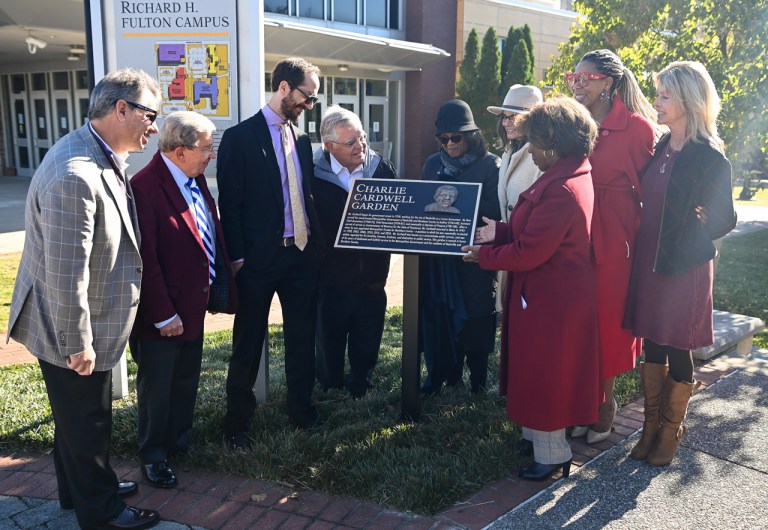 Charlie Cardwell passed away in 2019 due to  complications from a heart attack, and was Metro government’s longest-serving employee. He was 83.

The beloved Cardwell was appointed trustee in 1993 and had been elected by Nashville voters to six four-year terms.

Prior to Cardwell’s service as the elected trustee, he served as Metro Nashville’s finance director and deputy mayor. Cardwell also served as the state of Tennessee’s commissioner of revenue under Gov. Ned McWherter.

The memorial garden is located at the Howard Office Building, which Cardwell attended as a student when it was formerly a public school and where he served as trustee after the office moved from its Second Avenue location.

Metro Assessor Vivian Wilhoite offered her thanks to those who were able to attend the dedication, saying: “We loved and endeared him for so long. He has inspired all of us.”

Current Trustee Erica Gilmore said: “It is an honor to be here today on this momentous occasion as the current Metropolitan Trustee. To honor man whose shoes I now walk in is not only a privilege, but it is an honor.”

According to Charlie Cardwell’s longtime friend, Former Trustee Parker Toler, the idea of the memorial garden and naming the conference room after Cardwell was the result of a discussion between himself, Assessor Vivian Wilhoite and Trustee Gilmore. The trio came up with the idea during the 2020 Christmas open house that was dedicated to Cardwell’s memory.

“It’s a great place for the garden,” said Toler.  “Just outside of his office as trustee and the campus of Howard High where he graduated, and close to the area where he grew up.”

Mayor Cooper also gave remarks at the ceremony, saying that he is “honored to join so many friends this morning as we celebrated the Charlie Cardwell Garden. Charlie dedicated his life to public service.”

‘Give Black, Give Back’ sets series of informative...