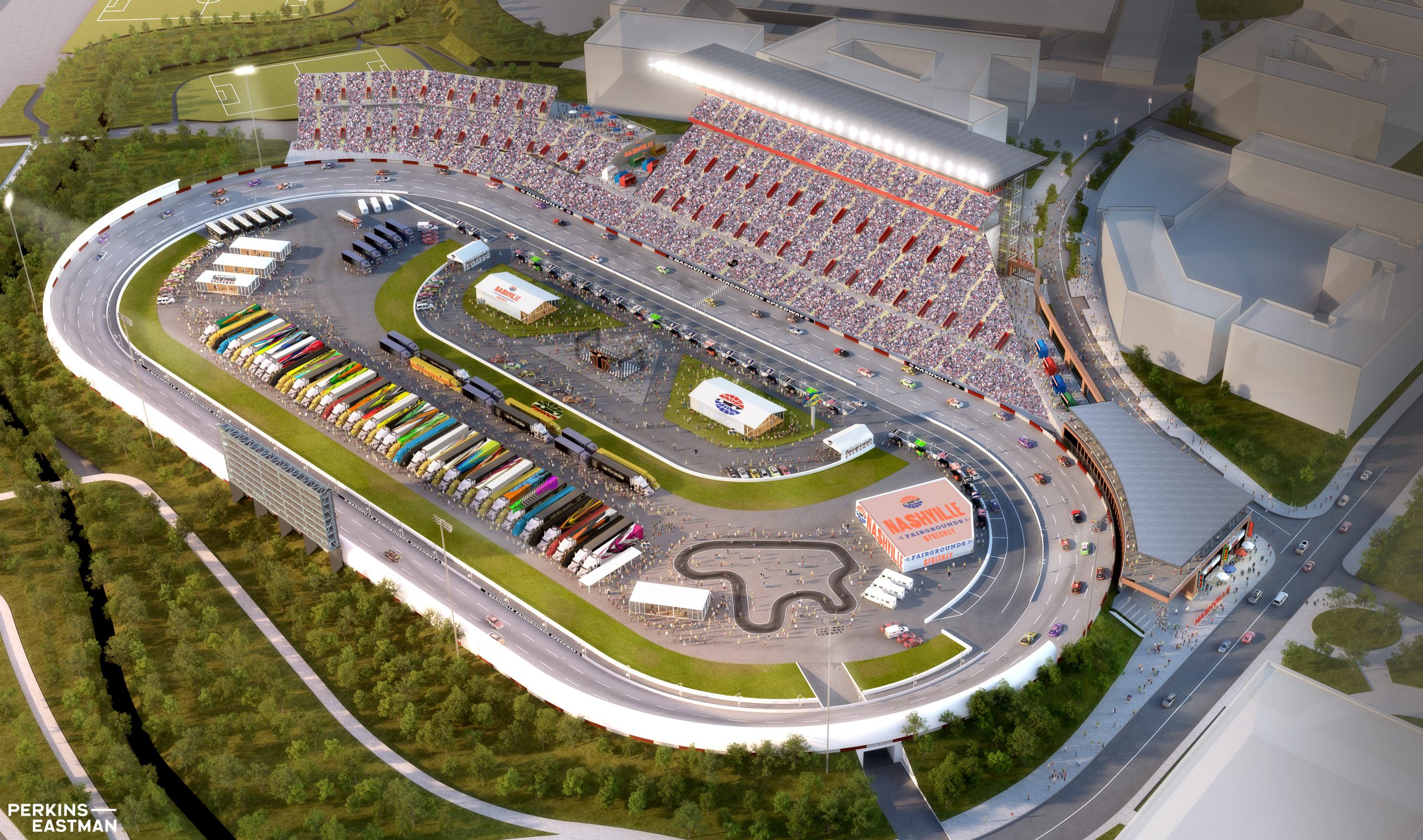 Rendering of the proposed speedway. With no impact to Metro’s General Fund, Nashville will bring NASCAR back to the historic speedway and transform the fairgrounds.

Following the letter of intent signed in March 2021, Bristol Motor Speedway (BMS) has presented Mayor John Cooper with a proposal to both revitalize the legendary 117-year-old Nashville Fairgrounds Speedway and bring NASCAR Cup Series racing back to Nashville. Mayor Cooper has agreed in principle to the plan.

“This partnership creates an economically viable future for our historic track, spurs hundreds of millions of dollars in economic activity, and completes the last unrenovated part of the Nashville Fairgrounds at no cost to the Metro General Fund,” Mayor John Cooper said.

The Bristol proposal meets Mayor Cooper’s objectives. It revitalize the speedway at no cost to the Metro General Fund; benefits the overall Fairgrounds campus; implements noise mitigation as part of the redesign; reduces track testing days and generates hundreds of millions of dollars in positive economic impact for Nashville.

The Metro Charter requires auto racing at the Fairgrounds, so Metro Government has an obligation to maintain the facility. A partnership with BMS satisfies those obligations while restoring the second-oldest operating motor speedway in the United States to the national stage.

The partnership will result in a modernized track that meets NASCAR series standards and transform the Fairgrounds Speedway into a true multipurpose venue that can also host non-racing, revenue-generating events. BMS is a wholly owned subsidiary of Speedway Motorsports, which owns and operates eight state-of the-art sports entertainment venues nationwide.

A renovated, activated Fairgrounds Speedway under experienced leadership would have a significant economic impact for Nashville and the region. A slate of NASCAR series and other major races, in addition to an expanded calendar of revenue-producing, non-motorsports events would generate about $100 million annually in economic activity, through visitor spending at hotels, restaurants and other local attractions, according to an analysis by Tourism Economics, a division of Oxford Economics.

Recent renovations to the Fairgrounds have included a new state-of-the-art MLS stadium and new expo facilities, but have lacked a vision for the historic speedway’s future. In March, Metro Government entered into a letter of intent with BMS to explore involvement with the experienced track operator.

An independent sports finance consultant is currently reviewing the financial framework of the proposed plan. If the external consultant’s report confirms the sound financial footing of the proposal, it will be publicly presented to the Board of Fair Commissioners for consideration once the two open Fair Board seats have been filled. Mayor Cooper is working with Vice Mayor Shulman to create a Fair Board that reflects the cultural diversity of both Fairgrounds visitors and Davidson County overall. If the deal is approved by the Fair Board, the proposal will be submitted to the Sports Authority and the Metropolitan Council with related legislation.

“In keeping with the national profile that Nashville Soccer Club is bringing to the Fairgrounds in 2022, this innovative partnership will bring our historic speedway back to life as a crown jewel in the world of motor sports,” Mayor Cooper said. “Having professional soccer and NASCAR side by side will make our Fairgrounds a family destination for Nashville’s future. I look forward to working with Bristol, the state of Tennessee, the Fair Board, the Sports Authority and the Council on this proposal.”

“I grew up going to the Fairgrounds Speedway with my dad on Friday nights, listening to him work as a spotter for racers like Andy Kirby and Steadman Marlin. It would be my honor to sponsor legislation that brings NASCAR back to Nashville and restores the track into something that our whole county can be proud of again,” said Zach Young, District 10 Metro Council member