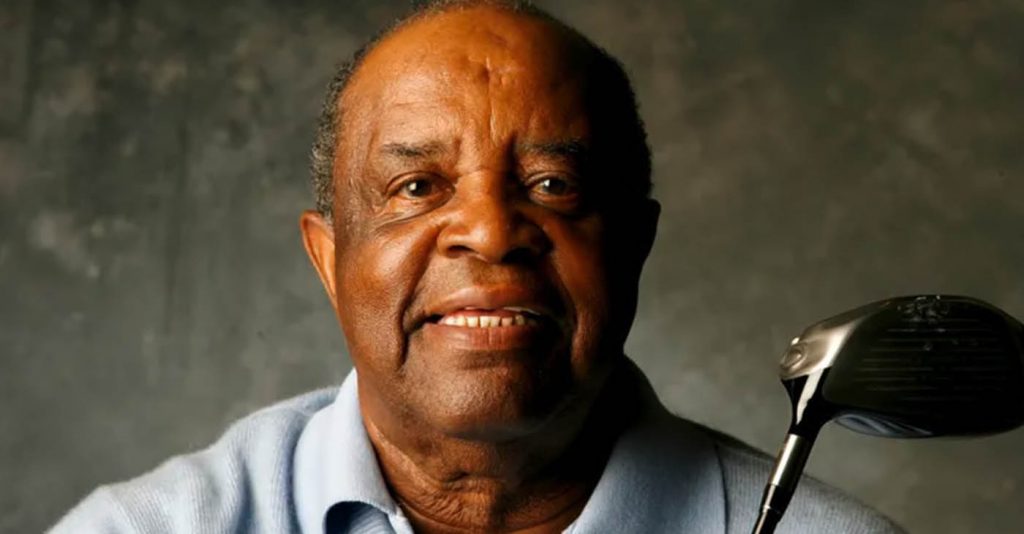 Lee Elder, a golfing pioneer, and the first Black player to compete in the Masters has died at 87.

“It’s remarkable to look back on Lee’s life and career and realize the hardships he endured and the sacrifices he made to reach golf’s highest level,” said PGA TOUR Commissioner Jay Monahan.

“To have the success he had while paving the way for others to dream big and achieve is a testament to the type of man he was and how much talent he possessed. The Tour is profoundly grateful for the career of Lee Elder, and we extend our sincere sympathies to his family.”

Born in 1934 in Dallas, Texas, Elder took up golf to help his parents financially.

He caddied at the all-White Tennison Park Golf Club in Dallas, but soon the golf pro began allowing Elder to play the course.

In 1959, Elder joined the United Golfers Association and dominated the all-Black group.

According to <BlackPast.org>, Elder won four Negro National Open Championships and an eye-opening 18 of the 22 tournaments in which he participated.

Using the purses from those victories allowed Elder to participate in the 1967 qualifying school for the PGA TOUR.

In 1971, Elder made history as the first Black player invited to participate in the South African PGA Tournament.

“His participation in that event made this the first integrated sports event in South Africa since the establishment of the official Apartheid policy in 1948,” researchers at the Black Past wrote.

However, they noted further that Elder and other Black golfers continued to face racial challenges at home.

“Although the PGA Tour was officially open to African Americans, it was not friendly to them. Many tournaments would not allow Black golfers into the clubhouse and instead required that they change and eat in the parking lot,” the researchers wrote.

However, in 1975, Elder made history again in Augusta, Georgia, when he was invited to compete at the Masters Open, the most prestigious tournament in golf.

With his victory at the 1974 Monsanto Open, Elder automatically qualified for the Masters Open, but he also became the first Black player invited. Unfortunately, Elder missed the qualifying round in the tournament.

Still, his entrance was an African American milestone covered by almost every major magazine and news program in the country, noted the Black Press.

He had a combined 12 tournament victories on the PGA and Senior Tours, earning more than $1 million on each tour.

However, his invitation to the Masters in 1975 proved that African Americans could compete at the highest levels of golf, the researchers continued.

“Lee Elder was a pioneer, and in so many ways,” legendary golf champ Jack Nicklaus told Bill Fields during a <PGATOUR.com> interview.

“Yes, he was the first Black player to compete in the Masters Tournament, but that simply underlined the hard work Lee put in to further the cause of everyone who has a dream to play on the PGA Tour and perhaps thinks there were too many barriers before them. It was wonderful that the Masters Tournament and Augusta National paid a well-deserved tribute to Lee by inviting him to be an Honorary Starter on this last Masters. That morning, you could see the joy in Lee’s face. Gary Player and I were honored to enjoy that moment with him. That memory will remain special for so many, including me, for many years to come.

“Lee was a good player, but most importantly, a good man who countless people very well respected,” said Nicklaus. “The game of golf lost a hero in Lee Elder. Barbara and I send our heartfelt condolences to Lee’s wife Sharon and their entire family.”