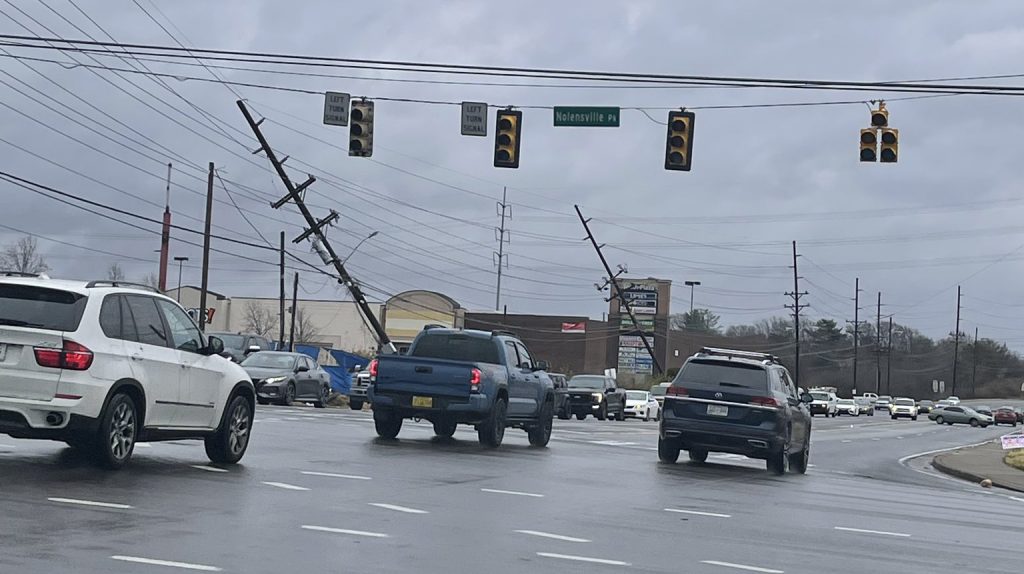 A string of  tornadoes ripped across the region leaving over 90,000 Nashvillians without power.

We ride the storms out. Then we pick up the pieces.

Unseasonal late-night tornadoes and high winds tore through parts of the South and Midwest over the weekend. They produced a series of at least seven tornadoes touched down in Middle Tennessee, the National Weather Service confirmed Sunday, damaging homes and businesses and knocking out power for about 95,000 residents at the peak of the storms.

The Community Foundation of Middle Tennessee is accepting donations for its Middle Tennessee Emergency Response Fund to help provide relief and recovery assistance to all affected Middle Tennessee communities. Tornadoes touched in Dickson, Kingston Springs and Burns in Dickson County; Humphreys, Stewart, and Hickman counties; as well as parts of Davidson County, Sumner County, and Mt. Juliet in Wilson County. Donations can be made at <www.cfmt.org/tornado2021>.

Despite extensive damage, Middle Tennessee was spared the brunt of the storms. They left a path of death and destruction from Arkansas and Missouri through Tennessee, Kentucky and Illinois, with at least 64 people confirmed dead in Kentucky alone, according to news reports.

“Our friends and family in nearby Western Kentucky were hardest hit,” said Ellen Lehman, president of The Community Foundation as President Joe Biden approved a disaster declaration Sunday. “A roof of a candle factory in Mayfield, Kentucky collapsed, about two hours from Nashville, leaving multiple deaths. And Bowling Green, about an hour north of Nashville, suffered extensive damage.”

In Illinois, at least six people were confirmed dead after an Amazon warehouse was decimated in the Southeastern city of Edwardsville, near St. Louis. At least four people died in upper West Tennessee.

“Per usual, Middle Tennesseans want to help the survivors,” said Lehman. “We’ve been through this, way too often and way too recently.”

Donations to the Middle Tennessee Emergency Response Fund will provide relief and recovery assistance to all affected Middle Tennessee counties. Grants from the response funds will be made to nonprofits providing vital services both immediate and long-term. CFMT’s work helps free up nonprofits to concentrate on delivering vital services while we “connect generosity with need,” and our community sets out to rebuild lives. To make a gift to the Fund, visit <www.cfmt.org/tornado2021>.

CFMT has been responding to disaster since 1993, just two years after the organization was founded. In its longtime role in responding to the needs of the community during disasters near and far (beginning in 1993-94 with Nashville winter snow and ice storms along with Japanese tsunamis) its team helps bring calm to chaos.

For the Tennessee statewide crisis telephone line, Call 855-CRISIS-1 (855-274-7471) to speak with a caring, trained mental health professional, 24 hours a day, seven days a week, if you are experiencing a mental health emergency. You can also text TN to 741741.

The Tennessee Emergency Management Agency (TEMA) launched a website for those affected by the storms across the state. The website is at <www.tn.gov/tema/get-involved/december-severe-weather.html>.

TEMA also announced a Crisis Cleanup service is in place for Tennesseans who need help with cleaning up following the severe weather and tornadoes. Individuals needing assistance can call the hotline at 800-451-1954.

Volunteers can connect with Tennessee Volunteer Organizations Active in Disasters (VOAD) at <tnvoad.org/donate>.

The American Red Cross of Tennessee continues to serve those affected by the severe weather. Emergency assistance is available to individuals whose homes were destroyed or majorly impacted. For more information, contact the American Red Cross by call 1-800-RED-CROSS (1-800-733-2767).

Parents raise alarm about school violence
Votes depend on improvement