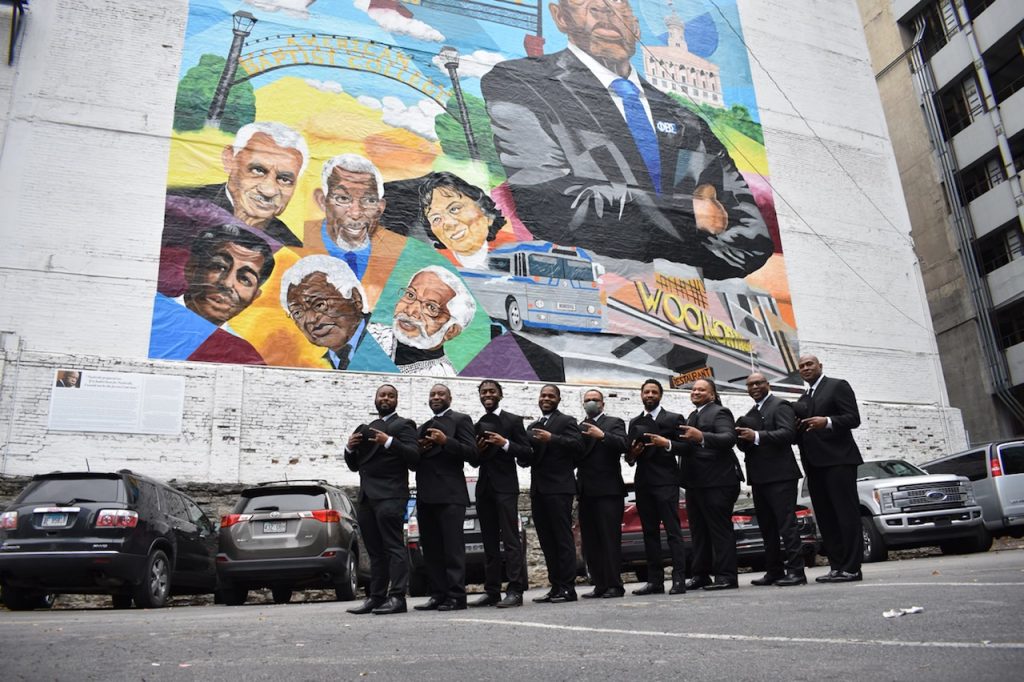 The new member presentation, or ‘reveal’ as it is frequently called, was the conclusion for nine professionals in joining the graduate chapter of Phi Beta Sigma.

“Phi Beta Sigma Fraternity Inc is a service-based organization, and one of the most significant parts is bringing in new members for the chapter,” said James Callahan III who serves as the organizations first vice president.

Callahan is in charge of membership. He explained that the new member presentation was the culmination of the membership intake process.

“The presentation is the conclusion of their initiation onto the fraternity,” Callahan said. “After they have completed the process, the ‘reveal’ is a public celebration of those gentlemen in joining the fraternity.

“The name of the line and the members individual line names are revealed for the first time—reflective of their personal characteristics and what they add to the fraternity.”

The name of the reveal was ‘Nine Shades of Blu.’ Individual names ranged from Deep Blu to Eternal Blu.

Phi Beta Sigma fraternity was founded at Howard University in Washington, D.C., on January 9, 1914, by three young African American male students. The founders included: A. Langston Taylor, Leonard F. Morse, and Charles I. Brown. These gentlemen wanted to organize a Greek letter fraternity that would truly exemplify the ideals of brotherhood, scholarship, and service.

Zeta Phi Beta sorority, founded in 1920 with the assistance of Phi Beta Sigma, is the sister organization of the fraternity.

Alumni membership in Phi Beta Sigma fraternity is limited to professional men who have earned a baccalaureate degree by a recognized college or university.

One of the new members, Thomas Hunter, says that he joined the fraternity because of the ideals set forth by the group.

“I really like the brotherhood aspects of it being a part of a community of men who are service minded that do more than get together socially,” said Hunter.

Hunter said that he really appreciates how the organization works with youth and focuses on the service of others and the community.

“Phi Beta Sigma is really a fraternity that’s function is service,” said Callahan. “Those service opportunities are still there regardless of one’s age.

“We have a saying, ‘It’s a great day to be a Sigma and there’s no wrong time to become a member.’”