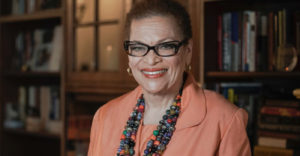 Dr. Julianne Malveaux is an economist, author and dean of the College of Ethnic Studies at Cal State LA.

(TriceEdneyWire.com) — According to MasterCard’s spending reports, consumers spent more than 10% more than they did in 2019 before the COVID pandemic even hit. Inflation rose by six percent each month in October and November (don’t add it up—it’s monthly, not annual).

Unemployment rates are lower than they’ve been in more than a decade. And yet, folks are singing the blues, asking for an extension of child tax credits, looking for support for those living at the periphery, and looking for opportunity. The Scrooges in the house aren’t inclined to do a darn thing about it. Thus you get a Sen. Joe Manchin (D-W.Va.), whose one-trick line is that he can’t support inflation, or a Sen. Kristen Sinema (D-Ariz.), a shill for Big Pharma. While some economists are touting economic recovery, others wonder who is recovering.

Dr. Algernon Austin, who directs the Race and Economic Justice Program at the Center for Economic and Policy Research, asserts that we aren’t counting disadvantages correctly. In particular, he has written that Black male unemployment is far more severe than the unemployment rate data measure, especially when we consider the employment-population ratio, incarceration, and other factors that leave Black men far more unemployed than other men <cepr.net/report/the-jobs-crisis-for-black-men-is-a-lot-worse-than-you-think>. In his estimation, about $12 billion is leaked from the Black community because of job losses and related differentials.

Austin’s work does not directly address the losses that the Black community experiences because of the differential treatment of Black women,  but they are at least equal. Discrimination and differential treatment are a tax on the African American community, which is often unrecognized. The recent focus on the wealth gap allows us to delve into the history of the gap, the systematic ways that predatory capitalism has extracted wealth from the Black community. It’s not just about the past, though. It is about the current practices that African American workers are disadvantaged, discriminated against, and robbed of economic agency.

I appreciate the many ways that younger Black folks create alternate paths to income and wealth for themselves and their communities, using electronic media, selling their ‘merch,’ and putting their face in the space. However, they should not be denied the mainstream paths to economic prosperity, ways too often riddled with pitfalls, challenges, and just everyday racism. Thus, when conversations about economic recovery occur, it is essential to note that an unequal start will result in an unequal finish. In other words, centuries of discrimination will yield unequal recovery results.

This is important because as some, like Sen. Manchin, are talking about inflation, while some are harder hit by inflation than others. When some, like Manchin, talk about low unemployment, others say they can’t find jobs. And while some are talking economic recovery and supply chain issues, others are spending up a storm. Our economy has always been bifurcated, but COVID has made it even more so. President Biden has not done a great job, but he is exponentially better than his predecessor. Yet he has not done enough to close gaps between the haves and the have nots.

Many are experiencing an economic recovery, and good for them. Too many, still, are living through an economic crisis, which is not so good for them or their families. The gridlock between the House and the Senate paralyzes our nation and puts stumbling blocks in the path forward. Are we prepared to allow a few narcissistic laggards to throw a monkey wrench into the Biden plan? And is President Biden prepared to prioritize collegiality over results?

When the data is disaggregated, we will find that economic recovery is uneven. The Biden Administration can fix some of this through executive order, and they need to do it as soon as possible. There are young folks who heard our president say he had their backs. Now they want him to exhibit some backbone. Those whose lives are in economic crisis aren’t interested in gloating about economic recovery.

(Dr. Julianne Malveaux is an economist, author, and dean of the College of Ethnic Studies at Cal State LA. Visit <Juliannemalveaux.com>.)