Titans win AFC South with 34-3 win over the Dolphins 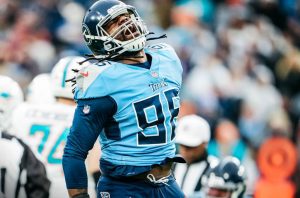 The Titans captured the division title on Sunday with an impressive 34-3 win over the Dolphins at Nissan Stadium.

The win improved Tennessee’s record to 11-5, and it also accomplished this:

– It gave the organization its first back-to-back division titles since the Houston Oilers won three AFL Eastern Division titles from 1960 to 1962.

With a week left in the regular season, the Titans are now the No.1 seed in the AFC after Kansas City’s lost to the Bengals on Sunday.

But even during their post-game celebration, when players sported AFC South champion hats and t-shirts, the message was clear: The Titans are far from satisfied.

Titans head coach Mike Vrabel will remind his players of this plenty before next Sunday’s game vs the Texans. The Titans need to win that game to clinch the No.1 seed in the AFC, which would come with a first-round bye in the playoffs.

“I think winning takes care of everything,” Vrabel said. “And that’s what we tell them all the time, and that the mentality was that we were just getting started. We’ll have to prepare for a team that’s been playing really well and that’s already beaten us once this year.”

The Titans took control of Sunday’s game early, and never looked back.

Running back D’Onta Foreman ran for 132 yards and a touchdown for the Titans in the contest, and quarterback Ryan Tannehill threw two touchdown passes while throwing for 120 yards.

“We had to worry about ourselves and we had to win today,” Titans receiver A.J. Brown said. “We are not really worried about anyone else no matter what cards we were dealt. We had to win today, and we got the win today. Next week, it’s going to be winning next week, against Houston. We know that right now, it’s playoff football. And we are already trying to get in form, because it gets tougher.”

The Titans took a 7-0 lead in the first quarter on a one-yard touchdown pass from Tannehill to tight end Geoff Swaim.

After cornerback Elijah Molden recovered a fumble by Tagovailoa at the Miami 14, the Titans extended the lead to 10-0 on a 23-yard field goal by kicker Randy Bullock.

After the Dolphins cut the lead to 10-3 on a 39-yard field goal by kicker Jason Sanders, the Titans answered back with a beautiful scoring drive, which was capped off with a 21-yard touchdown run by Foreman. The sprint to the end zone put an exclamation point on an 11-play, 75-yard drive, and it gave the Titans a 17-3 lead at the half.

The Titans then extended their lead to 24-3 with 7:42 remaining on a 15-yard touchdown pass from Tannehill to tight end Anthony Firkser before a 44-yard field goal by Bullock made it 27-3 with 2:58 left.

Late in the contest, running back Dontrell Hilliard busted loose for a 39-yard touchdown run to make it 34-3.

And in the cold rain, Titans fans and players celebrated as the final seconds ticked off the clock.

Yes, the Titans are AFC South champs once again. But they’re far from satisfied.

“I’m pretty sure everybody that’s going to come up here is going to echo it that we’re not done yet. The season’s just getting started. There’s a lot more meat out there on the bone,” Titans safety Kevin Byard said.

‘Cancer: My Journey in Time’ (part 77)
Taking care of neighbors

Contention about what our children are not being taught

Three White men who murdered Ahmaud Arbery last year in Georgia were sentenced Friday to life in prison, and the judge denied parole to the father and son who armed

Prayer breakfasts, marches, parades, and an uptick in volunteer efforts to support the annual Day of Service have remained staples of Martin Luther King, Jr. Day. But the late civil

Maxine McNair, who was the last living parent of the four African American girls murdered in a 1963 Alabama church bombing by the Ku Klux Klan, died on January 2,

‘Cancer: My Journey in Time’ (part 77)
Taking care of neighbors

“How is your friend, Rev. Fuzz? I see that he is busy helping people. I see him on the news and it seems that he is doing well for someone

Contention about what our children are not being taught

With so little commentary done on ‘The Meaning Of The Withered Fig Tree’  who could have known that this ‘text led’ view of this scripture, (Mark’s 5th and final occurrence