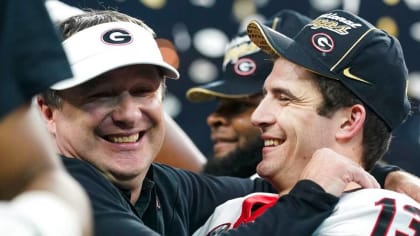 Bennett rebounded from a crucial fumble to fire two fourth-quarter touchdown passes to bring Georgia back from an 18-13 deficit.

Bennett completed 17 of 26 passes for 224 yards and two scores without an interception, overcoming a slow start to spark the late rally.

Defensively, Georgia turned Alabama away for field goals on three of its four red-zone possessions, and came up with a late pick-six of Crimson Tide quarterback Bryce Young to seal the victory.

Young, the sophomore Heisman Trophy winner, completed 35 of 57 passes for 369 yards and a touchdown, but found himself under far more pressure from the Bulldogs pass rush than he did in Alabama’s 41-24 win over Georgia in the SEC Championship Game a month ago. Georgia’s defense, ranked No. 1 in the nation, stuffed the Alabama rushing attack for most of the game and pressured Young well enough for four sacks.

A key play for Georgia, by one of many prospects for the 2022 NFL Draft playing in the game, came when running back James Cook broke a 67-yard run to set up Georgia’s first touchdown. Cook, the younger brother of Minnesota Vikings RB Dalvin Cook, has accepted an invitation to play in the Reese’s Senior Bowl in February. Cook finished with 77 yards on six carries.

Alabama wide receiver Jameson Williams, one of college football’s most explosive downfield threats, was injured on a 40-yard reception down the middle of the field and did not return. Williams took an awkward step after the catch and fell untouched by a defender, clutching his knee, but returned to the sideline without crutches to watch the second half. A junior, Williams also is a promising draft prospect, but has not announced whether he intends to file for early eligibility.

The first half was a back-and-forth battle of field goals, highlighted by defensive stalwarts on both teams, as Alabama led 9-6 at the break.