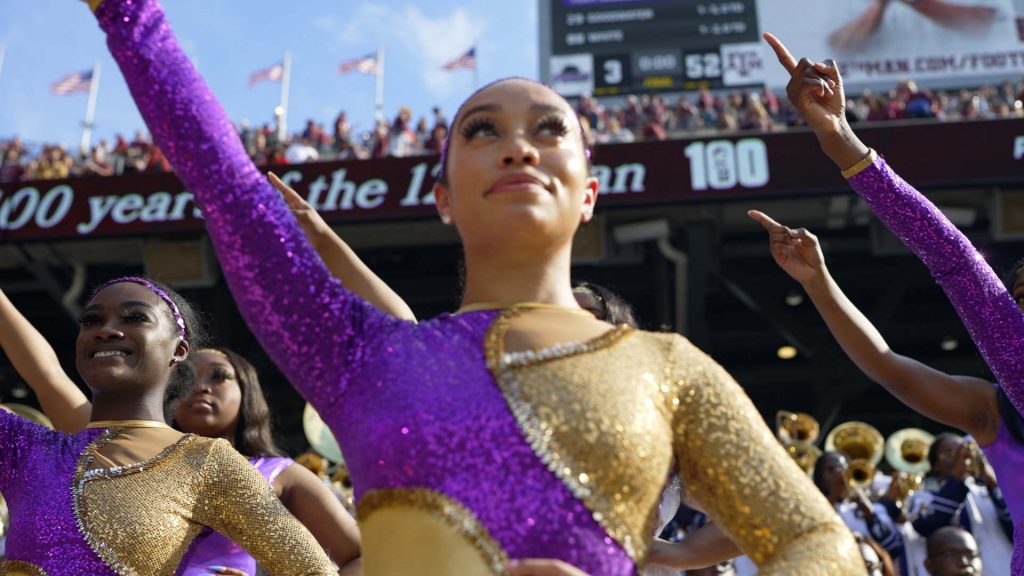 MARCH premieres January 24 on The CW.

“The very soul and spirit of every historically black university is conveyed through its marching band. From the deep, rich sounds of the tubas, the elegance of the majorettes down to the exuberant dance routines of the drum majors, college life would not be the same without its bands.” — Prairie View A&M University “Marching Storm” website.

On November 18, 2021, ESPN’s The Undefeated named the Prairie View A&M University “Marching Storm” the top Division I HBCU band in the country on the strength of top ratings for auxiliary, drum majors, pictures, drill and design, and top five placing in musicality and percussion.

“It is an honor to be validated by a panel of my peers especially in the age of YouTube and instant gratification for everything,” said Dr. Timmey T. Zachery, Director of Bands, Prairie View A& M University. “We have taken the charge of making our students aware of what they do well and areas that they can improve on. ESPN [The Undefeated] gives us a platform to use as a measuring stick, not against others but ourselves.”

It focuses on the Prairie View A&M University marching band, band culture, HBCU culture, and students balancing their academic work with preparing and performing in a large SWAC band.

The series chronicles their pressure-filled journey to become the highest-ranked HBCU band in the land, including electrifying performances at homecoming, Texas A&M and Southern University.

As MARCH shares the personal and unique stories of individual members and staff of the over 300-person marching band, it also explores the legacy and culture of Prairie View A&M and highlights how the Marching Storm band is an integral part of that rich history.

MARCH celebrates the colorful, boisterous, and competitive world of HBCU band culture through the eyes of the experts—the band members and leaders themselves. Embedded inside the Prairie View A&M University Marching Band, The Marching Storm, this engaging series will capture the blood, sweat, and tears each member sheds to make it to the field while balancing their dynamic college life.

MARCH moves to Sundays starting February after ALL AMERICAN and ALL AMERICAN: HOMECOMING takes over Monday nights. ALL AMERICAN: HOMECOMING, a spinoff of ALL AMERICAN, follows Geffri Maya Simone’s journey to Atlanta as she matriculates at Bringston University, a storied (fictional) HBCU. From Stage 13, MARCH is executive produced by Cheryl Horner McDonough, Jamail Shelton, Shari Scorca, and Marcel Fuentes.

MARCH showcases the dedicated, eclectic, and energetic group of college students at Prairie View A&M University—from drum majors and dancers to the flag team and all the section players—as they navigate performing in one of the most prestigious HBCU marching bands along with tackling a rigorous academic schedule and maintaining a high-grade point average.

Episodes can be viewed on The CW website, or The CW app, free, online, the day after they air on TV.

Prairie View A&M University is a public historically black land-grant university in Prairie View, Texas. Founded in 1876, it is one of Texas’s two land-grant universities, and the second oldest public institution of higher learning in the state. Their school Mascot is the Black Panther; their Endowment is roughly $130 million. Student Enrollment for Fall 2021 was 9,350; in 2018–19 they had enrolled 8,109 undergraduate students. It ranks #5 among all HBCUs in enrollment. For reference, Tennessee State is #7.

The Prairie View A&M Marching Storm has astonishingly been in existence for 80-plus years with known history dating back as far as World War I. The nationally regarded Marching Storm along with auxiliary groups the Black Foxes and Twirling Thunder has had the privilege of bringing the spirit and culture of Prairie View to a wide range of audiences and venues. The focus is always to maintain the 10 pillars of the Marching Storm: Preparation, Commitment, Consistency, Discipline, Character, Pride, Scholarship, Family, Responsibility, and Marching Storm.

Notable performances include several Presidential and Gubernatorial inauguration parades, The Tournament of Roses parade (2009), the 2017 Macy’s Thanksgiving Day Parade, nine appearances at the Honda Battle of the Bands Showcase, and several NFL halftime performances, including Superbowl 45.

The Marching Storm has been viewed by over 100 million viewers during the Formula 1 Opening Day activities at the Circuit of the Americas in Austin, Texas, and performed as the opening act for the 2016 Super Bowl Gospel Fest on BET.

In January 2020, a crowd of more than 58,000 HBCU fans, students, and alumni were on hand to witness the celebration of HBCU culture, musical talent, and pageantry in Atlanta’s Mercedes-Benz Stadium for the 17th anniversary Honda Battle of the Bands Invitational Showcase. The HBOB theme, “Be the Dream,” highlighted the power that dreams have to inspire a brighter future. The show opened with a soulful performance by all eight bands, as more than 2,400 musicians and dancers joined together on the field.

Mia Berry, on ESPN’s The Undefeated website, publishes two sets of HBCU Marching Band rankings four times each year, for Division I schools and DII. The Marching Storm was No. 8 in the initial ranking (September 23, 2021) and No. 2 in the second ranking (October 21, 2021), then moved to No. 1 in the third-ranking (November 18, 2021). Norfolk State Spartan Legion then moved to No. 1 on the strength of top ratings for pictures, drill, and design; musicality; percussion; and a top-10 placing in drum major and auxiliaries in the final ranking, released December 14, 2021. Mia Berry is a 2020 graduate of Notre Dame University with a B.A. degree in film, TV, and theatre. She is the HBCU reporter for The Undefeated.

“Marching Storm’s 330-member band brought its brass and beats to Kyle Field at Texas A&M, performing at halftime before 98,251 fans,” says an online report of the band’s visit to Texas A&M on November 20. “The band took 10 buses to College Station whereas the Panthers’ football team only took two.”

The Panthers team lost that football game 52-3 to the Aggies in College Station, located only 48 minutes, or 51.1 miles, away via Hwy 6 South, after leaving the PVAM Campus on Sandra Bland Parkway. Sandra Bland had played in the Marching Storm while enrolled at Prairie View.