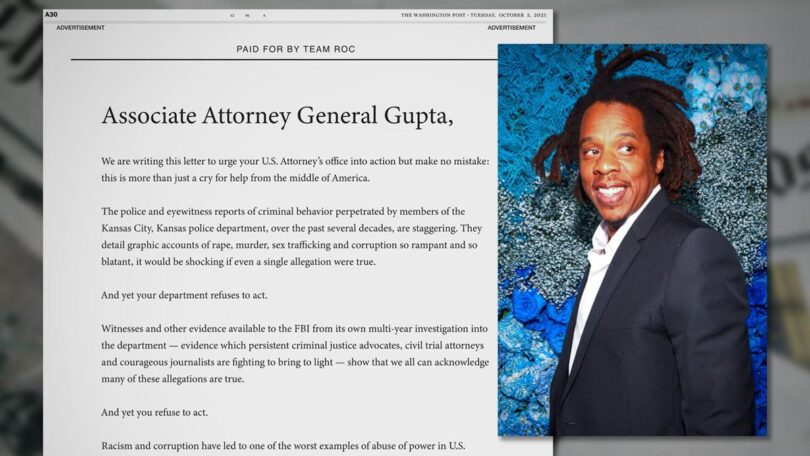 Jay-Z, whose real name is Shawn Carter, joined in writing an open letter to the Justice Department stating that there’s no excuse to justify the department’s silence.

Hip-hop pioneer Jay-Z and Team ROC, the social justice side of his entertainment company, have demanded the U.S. Department of Justice probe the Kansas City, Kansas, Police Department for systemic misconduct.

Jay-Z, whose real name is Shawn Carter, joined in writing an open letter to the Justice Department stating that there’s no excuse to justify the department’s silence.

The letter asserted that “there is enough evidence of systemic police misconduct in the department that a pattern of practice investigation is necessary to review allegations of wrongdoing and discrimination.”

The nonprofit Midwest Innocence Project has joined Team ROC in the call for an investigation.

“The DOJ’s continued inaction tells targeted minority communities held hostage to the whims of the carnal state that justice does not exist for them, that their lives do not matter,” the organization wrote in the letter addressed to Associate Attorney General Vanita Gupta.

Alex Shapiro, Team ROC’s lawyer, said incidents they’ve uncovered include a former Kansas City detective whom federal authorities investigated in 2021 over allegations of exploiting Black women for sex and framing individuals for crimes they did not commit.

Shapiro noted that FBI records dating to the 1990s found numerous allegations of civil rights violations. About 200 Kansas City police officers were accused of misconduct and excessive force complaints over the years.

“They kept hitting our desk over and over again, and we knew we had to get involved,” Shapiro told reporters.

“Because after years of denial and avoidance by the U.S. Attorney’s office, your department, and despite the lives that have been broken and ruined by their criminal actions and your inaction, there’s still time for you, as a leader in the department, to lift this city and these people up and out of the hell that has been their constant companion.”