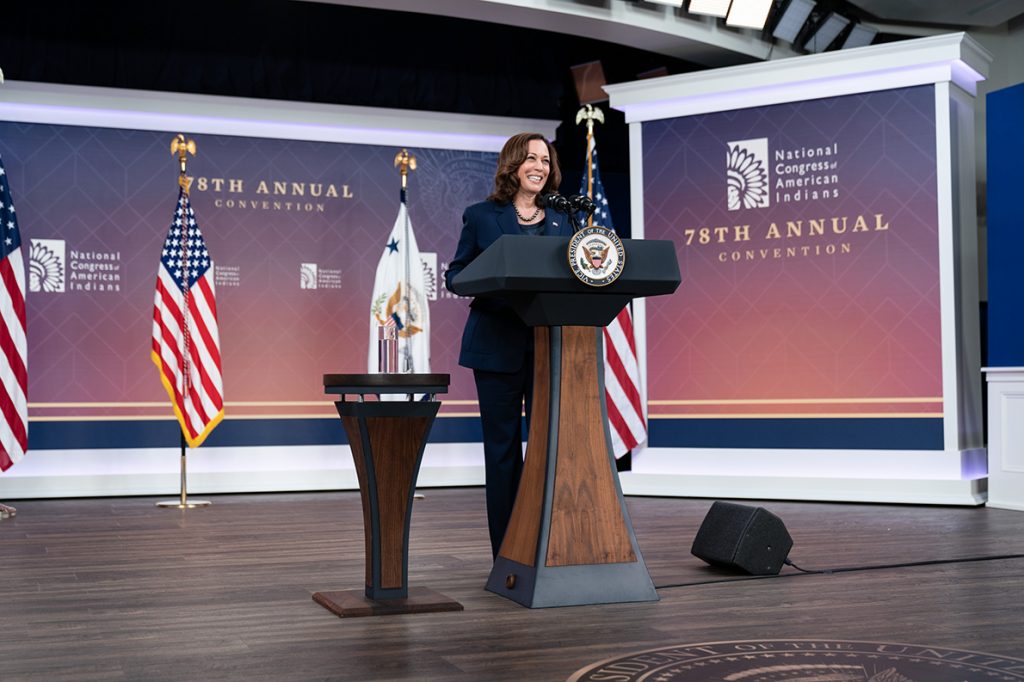 Vice President Kamala Harris provided a message of hope while striking an encouraging tone during an exclusive interview with the Black Press of America.

The vice president, who cut her teeth as a California prosecutor, the state attorney general, and later as an influential U.S. senator, said that despite many setbacks to voting rights, she and the entire Biden-Harris administration haven’t and won’t stop fighting.

“I will tell you that I gave a speech with President Biden at Morehouse College, and afterward, I had a quiet visit with Ambassador Andrew Young because I was looking to him for inspiration,” Vice President Harris told the gathering of publishers and journalists from the National Newspaper Publishers Association (NNPA).

“Based on what history has taught us, Ambassador Young said in a nutshell that freedom is a constant struggle. But we don’t give up. That’s where I am. I’m not giving up.

“We are going to keep on. This is a movement for voting rights. Coretta Scott King said the fight must be fought and won with each generation. This is certainly a moment that we should not have to be in, which is fighting against blatant laws that are designed to target specific communities that obstruct access to the ballot box.”

Vice President Harris said that she’s leaned on “folks from every walk of life.”

She declared that all must remain purposely intentional and optimistic. With Democrat Sens. Joe Manchin of West Virginia and Krysten Sinema of Arizona dealing death blows to any hopes of passing the John Lewis Voting Rights Advancement Act and the Freedom to Vote measure, Vice President Harris declined to place blame alone on those renegade party members.

“We have a fight in front of us. I will emphasize that there also are 50 Republicans who took an oath to support and defend the Constitution,” Vice President Harris said.

“I’m not prepared to absolve them of their responsibility to stand in the shoes and in the legacy of the Republicans who, in 2006 in that chamber in the U.S. Senate, voted 98-0 in favor of the extension to the Voting Rights Act.

“Let us be clear about the challenge here and who the protagonists and the antagonists are. The bottom line is that we must march on and fight on. It’s not new to us. We can’t be tired even though we are frustrated, and yes, disappointed, if not angered that we’re continuing to have this fight.”

In the news she provided exclusively to the Black Press, Vice President Harris announced the first National Roadway Safety Strategy.

“It’s about putting $6 billion into state and local government to improve safety on the roads,” Harris said. “It’s about funding for local communities for better streetlights, ensuring crosswalks are safe. We’re talking about the elderly, the mother with the stroller, the father with the stroller—people given enough time to cross the street. It’s a very big thing when you talk about the quality of life and when you live in communities where they rely on public streets to walk to church, to get the kids to school, to get them to the bus stop.”

NNPA President/CEO Dr. Benjamin F. Chavis Jr. called the meeting with the vice president “a tremendous boost for the NNPA.”

“Speaking directly with Vice President Kamala Harris today was a tremendous boost for the NNPA as we begin our yearlong promotion and celebration of the 195th anniversary of the Black Press of America,” Dr. Chavis said.

Vice President Harris noted that her first year in office had kept her busy. She has met with heads of state, prime ministers, and other dignitaries.

Alarmingly, Harris noted that many had expressed concern about voting rights in America and the many voter suppression laws that have passed in Republican-led states since the 2020 election.

The vice president noted that not only are those targeted by such laws affected but America’s standing as a global leader also has suffered.

“I hosted at the Vice President’s Residence, [former German Chancellor] Angela Merkle, and while talking about China and Russia, she asked: ‘What is going on with voting in America?’” Harris said.

“We as Americans are about to take ourselves off the map as a role model for what democracy should be. The world is watching.

“You watch what a role model does. I met with the presidents of Zambia and Ghana in my office, and they were talking about these issues. It has a direct connection to our standing around the world. We lose our legitimacy. Voting rights is a domestic issue, but it will impact our standing in the world.”

She pointed out that the bill contains significant funding for public transportation, a vital issue for people of color and the poor.

“African American workers are four times more likely to take public transit than White workers,” Harris said. “If we’re not putting funding in public transportation ($90 billion specifically) it means that if you miss your bus, you might lose an hour waiting for the next, and you could lose your job. So, it’s a big deal.”

She noted that the bill funds broadband in areas where none exist, and many find it hard to afford. Additionally, the infrastructure bill removes lead pipes and lead from paint, a serious problem facing many African American and low-income households.

When the administration began, the pandemic had taken its toll on much of the country and the globe. Since taking office, Vice President Harris said more than 200 million Americans had received COVID vaccines, and 75 million have gotten booster shots.

She noted the economic bounce back in the six million jobs the administration has created and the near-record-low 3.9% unemployment.

“One of the things I’m so proud of is to put the issue of Black maternal mortality on stage at the White House,” Harris told the NNPA.

“Black women are three times more likely to die from childbirth, and that’s a function of several things including racial bias in the medical health system.”

She said she intentionally put training at the top of the list.

“The training community would be doulas and midwives who understand and know communities and who will give dignity to the families they serve,” Harris said.

“Another issue that disproportionately affects African American women is fibroids. Again, I’m talking fibroids inside the White House and what we need to do to address particular health needs of Black women in connection to what they do as wives, mothers, grandmothers, and leaders in the community.”

Dr. Chavis applauded Harris for her “detailed responses to questions posed by our NNPA member publishers from across the nation.”

“They were very informative and substantive,” Dr. Chavis said. “The truth is some in the mainstream media have not given the progress of the Biden-Harris administration the recognition that it deserves. We in the Black Press will continue to give voice on the critical issue of voting rights, health care, criminal justice reform, and the protection of American democracy as articulated by Vice President Harris.”