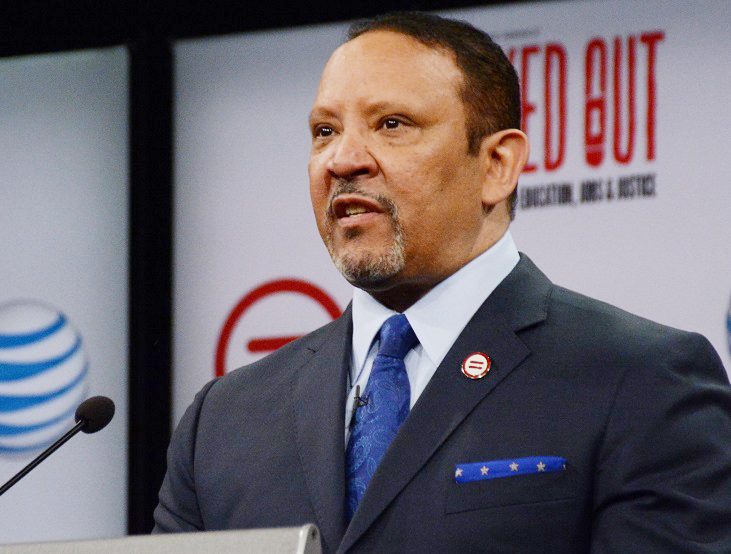 (TriceEdneyWire.com) — Marc Morial said he, like much of the country, watched the tug-of-war between Democratic and Republican senators over passage of two critical voting rights bills with dismay last week.

After 50 Republicans and two Democrats voted against a carve-out to allow a debate or a vote on passage of the bills, Morial (among other civil rights leaders) were left perturbed but resolved to keep on fighting until the upper chamber of the U.S. Senate passes both bills. The fate of African Americans and this country hang in the balance, he said.

“We’re working on precisely what happens next,” said Morial, president/CEO of the National Urban League and former mayor of New Orleans. “We will not be defeated. We will not give up. I’m dismayed and disappointed by the actions of 52 senators who will not allow this to come to floor, allow debate. This issue is far more important than the filibuster rule. Advocates and activists have to take the fight to the streets to let the public know about the obstruction of the senators. It’s old-fashioned obstructionism.”

The bills are crucial because they could override the damage already being done as dozens of state legislatures have already passed laws that are tantamount to voter suppression. According to the Brennan Center for Justice: “between January 1 and December 7 last year, at least 19 states passed 34 laws restricting access to voting. More than 440 bills with provisions that restrict voting access have been introduced in 49 states in the 2021 legislative sessions.”

Morial said he expects President Joe Biden to use his executive powers and the Department of Justice to sue the states, while using the tools at its disposal to blunt voter suppression and Republican intransigence.

Aided by the filibuster, Republicans had blocked debate on legislation that combined the John Lewis Voting Rights Advancement Act and the Freedom to Vote Act four times prior to last week’s heated debate. After the more than 10-hour deliberations, Democratic Sens. Kyrsten Sinema of Arizona and Joe Manchin of West Virginia joined 50 Republicans to defeat a change to the filibuster rules 52-48. Democrats needed 10 Republican votes to break the filibuster. They also failed to secure the votes to unilaterally change Senate rules to override the filibuster and allow the bill to pass with 51 rather than 60 votes.

She and other primarily Black female organizers and activists have been in the trenches fighting the Republican-dominated legislature in Georgia which passed a law last year that severely restricts the freedom of Black and brown people to vote, and which also gives Republicans the power to determine which ballots voters cast will be counted.

“I’m a woman of my word and walk it as I talk it with friends, others and the trash Republican Party,” she said during a recent interview. “Republicans have been successful in framing it as a Black issue and the press has helped out by framing it as a partisan issue. But what we’re seeing is an existential threat to our democracy and our ability to govern. Bipartisanship is absolutely not a virtue. Republicans have changed the electoral infrastructure. I think Democrats get it: not being able to pass the Build Back Better Act might have been the wake-up call.”

Ufot said she and other activists have said repeatedly that the right to vote is reflective and affects everything.

“There is no Build Back Better, no student loan debt forgiveness, nothing moving,” she said. “You have to get people in the states accountable to communities. They stole seats, gerrymandered and consolidated power.”

“I’m greatly frustrated. The people we work with get it. When we’re hosting events, organizing, building, ordinary Americans get it,” she said. “The demand has come from ordinary people. Leaders in the House and Senate get it. The House has done its part and we’re waiting on the Senate to get it together.”

The New Georgia Project was one of coalition of voting rights organizations that boycotted President Joe Biden’s speech in Atlanta on January 11. Leaders held a press conference to announce their boycott as a way to express their deep displeasure with the way Biden has mishandled and overlooked the issue.

“Yes, boycotting this event [was] absolutely the right thing. We’re asking them to do something else with their time. Go somewhere else to Arizona or W. Virginia,” said Ria Thompson-Washington on the day of the speech. “We [Black women] brought out the vote, brought them two senators. The organizers are fine. Biden should be using his powers to ensure that these bills pass such as whipping up the Senate to ensure that the filibuster is removed, no longer allowed to influence the passage of these critical laws.”

Thompson-Washington, an activist and independent consultant on voting rights and housing issues, said Biden’s visit to Georgia was widely rejected because they (activists) have already shown what they can do.

Republican legislators introduced bills in the legislative session following record turnout and a surge in Black and non-White voters in the 2020 presidential election last November and the senate races in January that propelled Rev. Raphael Warnock and Jon Ossof to the U.S. Capitol and who helped Democrats gain control of the upper chamber. The GOP has pointed to voter fraud to justify the new restrictions, despite no evidence of wrongdoing.

Former President Donald Trump and other Republican elected officials freely admit that if they allow everyone to vote, the GOP will never win an election again because they don’t have the overall numbers to do. So under the guise of election integrity, Republicans in state houses introduced more than 500 bills to restrict voting.

More than 1.3 million people voted by mail in the 2020 general election in Georgia and since then Georgia Republicans has led the way with wave after wave of voter suppression laws, voter subversion and gerrymandering. The bill signed into law by Gov. Brian Kemp includes an end the right to vote by mail without having to provide an excuse, which Georgia Republicans made law across the state in 2005. Among the law’s provisions are new limitations on the deployment of ballot drop boxes; the reduction of polling stations in Black neighborhoods; and a requirement that voters submit their driver’s license or state ID number as part of their vote-by-mail application.   Republicans have also criminalized the act of providing food and/or water to voters waiting in line to vote.

But the most alarming part of the law, activists and advocates say, is the provision that gives state officials the authority to override county election board officials and allow Republicans to potentially disqualify voters in Democratic-dominated areas.

Democrats and other critics have castigated Republicans for their willingness to destroy democracy in their desperate racist bid to hold on to power, with more than a few Democrats likening Republican efforts not just to a weaponization Trump’s Big Lie about a stolen election, but also as modern-day Jim Crow tactics reminiscent of the Jim Crow/segregation era.

Ufot and Thompson-Washington said organizers will continue to do their work on the ground to bring greater numbers to the voting booth. They promised not to ease up on the pressure on Biden, Democrats or Republicans.

“We gave them the votes, a governing trifecta of the White House, the House and the Senate. Forgive me for expecting them to govern,” said Ufot. “What’s the point of winning if you won’t govern? We want you to act like the house is on fire because it is. This country has a high tolerance for Black suffering. Because this is happening to Black people, you don’t care. I’m probably not going to get invited to anymore White House dinners but I’m good with that.”