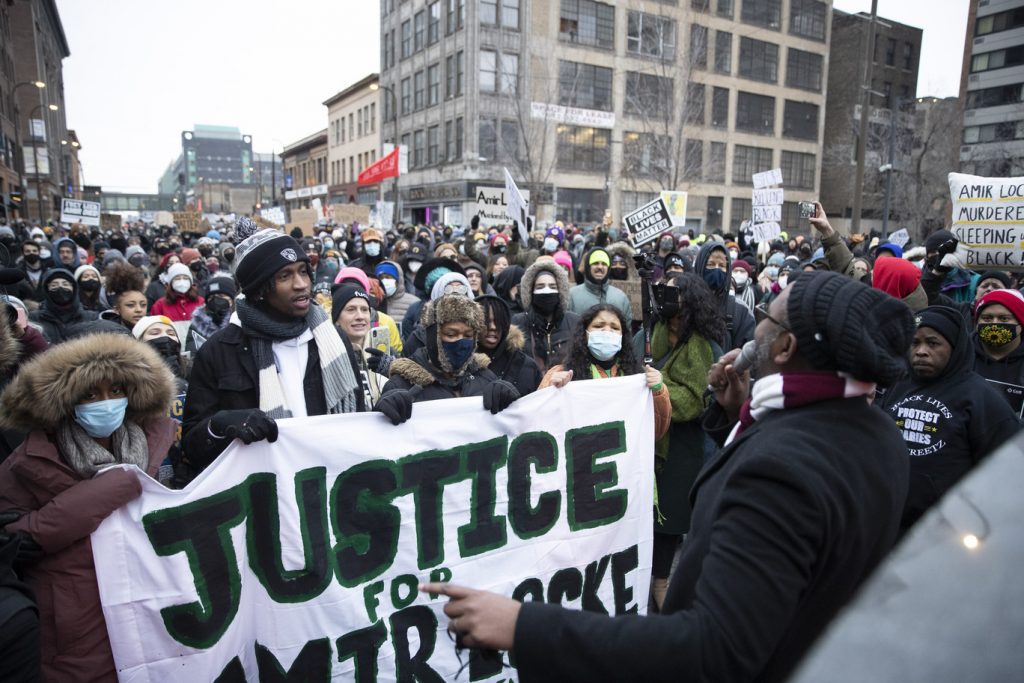 Demonstrators marched through downtown Minneapolis in protest of the police killing of Amir Locke.

Despite the cold weather, over 1,000 people gathered at the Hennepin County Government Center on Feb. 5 to show support for the family of Amir Locke at a rally organized by the Twin Cities Coalition Justice 4 Jamar (TCC4J).

Locke was shot and killed while sleeping at a relative’s apartment on Feb. 2 by Minneapolis police Officer Mark Hanneman in an early morning no-knock raid. Locke, a legal holder of a permit to carry a firearm, was killed less than 10 seconds after police entered the apartment.

Several members of Locke’s family were in attendance for the afternoon rally including his father Andre (Buddy) Locke, who gave an impassioned speech to the crowd before it departed the Government Center on a march to Minneapolis’ First Precinct headquarters.

“When we were born, they told us that they didn’t promise us that life would be easy,” Andre said. “It’s not. This is not easy, to have to bury your son. Sons, daughters. It’s not easy.”

Andre had to pause his speech and got emotional when he talked about not being able to protect his son.

“I wanted to make sure that my son didn’t do what they say my son did, that he was accused of doing,” Andre said. “My son did the right thing, as any law-abiding citizen that was sleeping in his own home, resting peacefully, after a hard day of work. He didn’t have a criminal history. He didn’t do anything.”

Andre called for 22 days of peace, asking for people of color to stand together and for people to not hurt others in their communities. Andre also asked the community to stand against ‘no-knock’ warrants, but emphasized that his family does not bash police, noting that some of their family members were in law enforcement.

Locke’s mother Karen Wells was unable to attend. “She was so overwhelmed with grief, disbelief, sorrow,” Andre said while speaking on Wells’ behalf. “Everything that you could imagine that a mother feels when she loses her baby.”

Amir’s aunt, Linda Tyler, also spoke about Wells’s grief. “We’re usually the ones in the crowd supporting the mom,” Tyler said. “And this time she is the mom.”

The crowd departed from the government plaza at 4:30 pm and headed towards the Minneapolis First Precinct police station. Rally organizers had prepared several new chants for marchers that had not been used in marches during the George Floyd protests in 2020, including singing, “We ready. We ready for justice and change” to the rhythm of Steam’s 1969 hit ‘Na Na Hey Hey Kiss Him Goodbye.’

In contrast with many of the rallies that made a stop at the First Precinct during the George Floyd protests, police response was minimal. A single police cruiser behind a gated-off alley was the only noticeable police presence, and officers did not exit the vehicle. The First Precinct building itself was still heavily fortified, with metal shutters covering its doors and windows.

Organizers gave further speeches on the block around the First Precinct, including Jaylani Hussein of the Council on American Islamic Relations (CAIR). In his speech, Hussein urged protesters to continue attending rallies. He also called for the resignation of Interim MPD Chief Amelia Huffman.

Hussein said CAIR is working in a coalition to try to pass bills through the state legislature that would make police in Minnesota more accountable, but that many of the bills championed by the coalition had not been passed in previous sessions.

“The real challenge has been the political parties have been traditionally stuck with their support for policing,” Hussein said. “So it’s not an issue that one party is more in support than the other. It’s not actually. The reality is that both parties have historically long bled blue. So they have a hard time now, pretty much trying to hold them accountable.

“Policies have never been enacted. With no policies, we have no progress.”

At 5:10 pm, the rally departed from the block around the First Precinct building and began moving back towards the Hennepin County Government Center. A few short speeches were given by the organizers from TCC4J to wrap up the event.

Sam Martinez, one of the lead organizers at TCC4J, spoke on his reason for organizing the rally.

“We come out every time we can to support the family, because it doesn’t matter what the circumstances are, the police are not the judge, jury, and executioner,” Martinez said. “We had doubts about what the story was when it came out, because it was very similar to the story about what happened to George Floyd.”

“[Amir’s family] were a whole protest pretty much in themselves. There were so many of them [in attendance,]” Martinez said.

The office of Mayor Jacob Frey did not immediately respond to requests for comment.

Attorney for convicted activist P. Moses vows to be a ‘fighter’ pursuing her relief from a six-year sentence