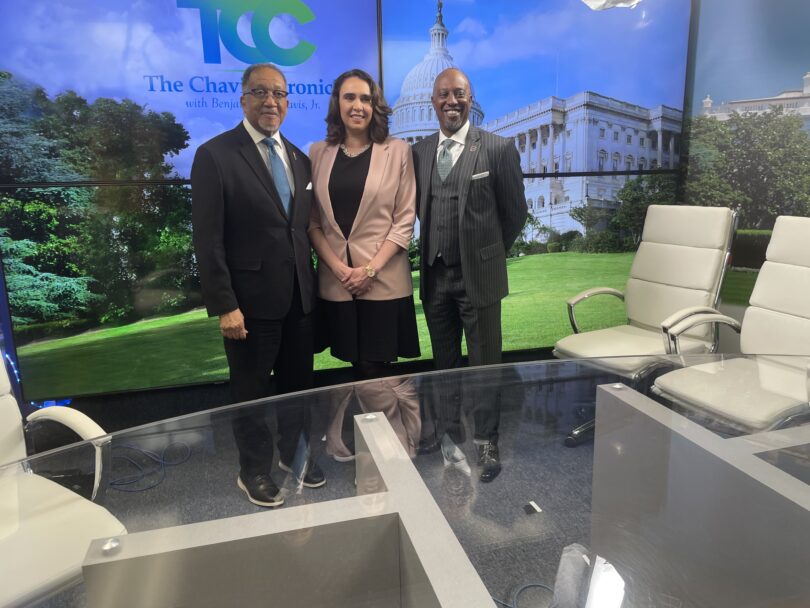 Bibi Hidalgo (c) of the SBA pledged to NNPA chairman Dr. Benjamin Chavis Jr (l), and Ron Busby (r) of the U.S. Black Chamber that her office will make the president’s contracting goals a reality.

When President Joe Biden directed federal agencies to increase contracting spending with small, disadvantaged businesses by 50% over the next five years, Bibi Hidalgo, the associate administrator of Small Business Administration’s Office of Government Contracting and Business Development, pledged that her office would take steps to ensure that agencies make the President’s contracting goals a reality.

In December, after the Biden administration announced reforms to the federal procurement process that increased the share of small and disadvantaged businesses in the federal contracting base, U.S. Black Chambers, Inc. (USBC) President Ron Busby offered resounding applause.

He said the USBC had long called for the change and had worked with the White House to ensure that new policies would open more significant opportunities for Black business owners to contract with the federal government.

Busby joined Hidalgo at the NNPA studios in Washington, D.C., for the interview with Dr. Chavis, which PBS-TV plans to air later during a segment of The Chavis Chronicles.

“We’re in a time in our nation where we’ve seen over the last two years that, when we realize government procurement and purchasing is not just a technical issue or a policy issue,” Hidalgo said. “It has everything to do with building wealth in this country. We [the government] are the biggest purchaser in the United States and the world. We purchase $560 billion every single year.”

After the murder of George Floyd, Hidalgo said the country realized “that what we are doing to empower Black communities across this nation comes back to Black businesses.”

“The president and his cabinet realized that this is beyond just us purchasing at the government-level, but how we invest and build wealth. That’s what contracting does. It builds wealth,” Hidalgo said.

Busby noted the challenges faced by Black-owned businesses even before COVID and lousy policy.

“The Paycheck Protection Program didn’t include our businesses,” Busby said. “We have 2.6 million Black firms, and 2.5 million of them had no employees, so you had a program set up to save employees, not employers. For African Americans, it didn’t relate to us, and that’s why it’s so important to have people of color sit in the room when policies are being discussed.”

Because of the president’s initiatives, both Hidalgo and Busby said they see a brighter future for small, disadvantaged businesses.

“We realize that there needs to be a dispersal across the country, not just in certain geographic areas,” Hidalgo said. “We still have a great deal of challenges as it relates to contracting, so we have to continue to challenge this administration and contracting agencies to be intentional.”

“When the president made his announcement, it was the first time that we saw what the government was spending on Black firms: 1.76%, which is less than $10 billion of this country’s contracts.

“Now, it’s on us to say how we can double, triple, quadruple, that. It starts with being intentional.”