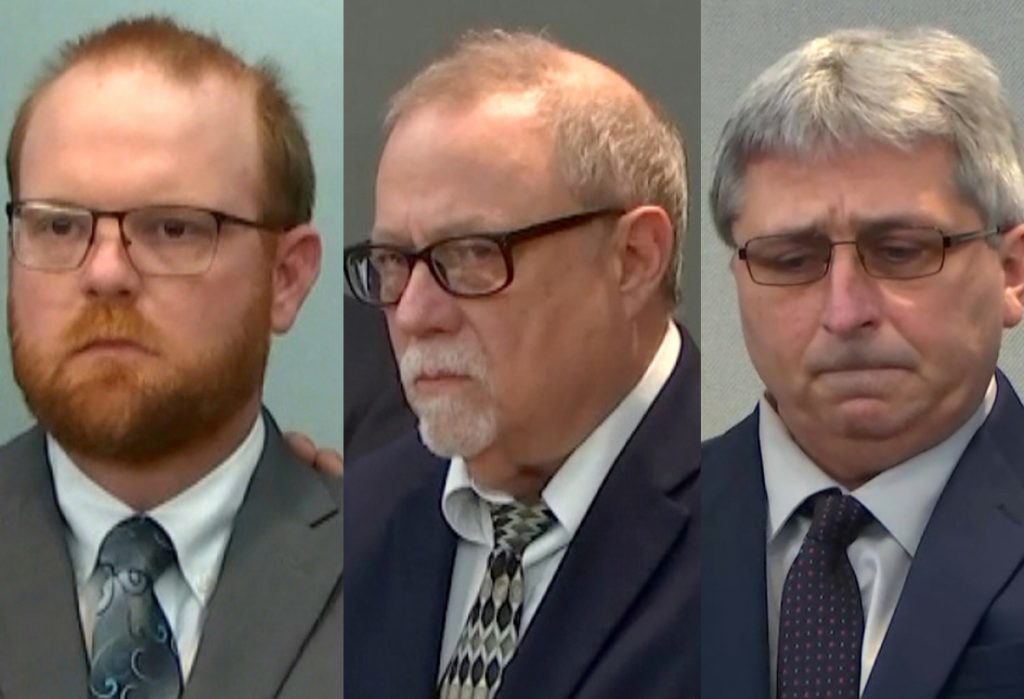 On the eve of the anniversary of his death, a federal jury found Travis McMichael, Gregory McMichael, and William ‘Roddie’ Bryan guilty of hate crimes on all counts in the murder of Ahmaud Arbery.

A federal jury found Travis McMichael, Gregory McMichael, and William ‘Roddie’ Bryan guilty on all counts in the murder of Ahmaud Arbery.

The verdict came on the eve of the anniversary of Arbery’s murder.

The McMichaels and Bryan chased Arbery through their mostly White Georgia neighborhood in their pickup trucks, cornering him before Travis McMichael shot the innocent jogger with a shotgun.

The trio was convicted in state court and given life sentences. The federal charges included a hate crime that exposed each of the men’s history of racism. Throughout the one-week trial, defense attorneys tried to sell the jury that, while the men weren’t “likable,” their actions weren’t driven by racial hatred.

The murder “was driven by their pent-up racial anger and [Travis McMichael] was just looking for a reason,” Perras said. He also noted that if the men thought Arbery had committed a crime, they never alerted the police.

Vaughn testified that Travis McMichael and his friends routinely used racist slurs directed at African Americans. One text from Travis McMichael to a friend describes how he enjoyed his new job because he didn’t have to work with Black people.

“They ruin everything,” McMichael wrote. “That’s why I love what I do now. Not a [n-word] in sight.”

In a Facebook video that purportedly shows a group of Black teenagers beating a White youth, Travis McMichael said: “I say shoot them all,” and he referred to the group as “monkeys.” Travis McMichael also referred to a woman who dated a Black man as an “[n-word] lover.”

Kim Ballesteros, who lived next door to the McMichaels, told the court about a conversation in which Gregory McMichael used racist language to describe a tenant he had.

“She was a large Black woman who did not pay her rent very well,” Ballesteros told the court. “Their name for her was the walrus.”

When Gregory McMichael told her that the woman didn’t pay her rent on time, he disabled her air conditioning unit.

“You should have seen how fast her big fat Black a– came up with the rent check,” Gregory McMichael said, according to Ballesteros.

“Happy Bootlip Day,” Bryan told a friend in one message. “I worked like a [n-word] today.”

Perras dismissed any notion that the defense attorney’s claims on behalf of his clients somehow justified their deadly actions.

“There’s a big difference between being vigilant and being a vigilante,” he told the jury. “It’s important for you to understand the full depth of the defendants’ racial hatred.”

“Tomorrow marks two years since Ahmaud Arbery was stalked, trapped, and murdered in cold blood as he jogged through his Brunswick neighborhood. And today, after much sorrow, grief, and pain, Ahmaud’s family can finally put this chapter behind them. For the last 24 months, they’ve dedicated themselves to getting justice for their son. They’ve had to relive his brutal murder, watch and listen as he was demonized in court, and fight to share with the world who Ahmaud Arbery was and who he could have been had his young life not been so violently cut short.

“For many of us, there was never any doubt that Greg McMichael, Travis McMichael, and William Bryan targeted Ahmaud because of his skin color. But because of indisputable video evidence, disgusting messages sent by the defendants, and witness testimony, their hate was revealed to the world and the jury. We hope and demand that the severity of their crimes are reflected in the sentencing, as well.

“Ahmaud Arbery was denied the opportunity to define his own legacy, but America, we have the power to ensure that it is one that propels our fight for equal justice and dispels hate from this world. That is how we continue to honor Ahmaud and make sure his death was not in vain.”

Before the trial, the McMichaels cut a deal with prosecutors. They agreed to plead guilty to hate crime charges and serve their sentence in federal prison.

However, Arbery’s parents, Wanda Cooper-Jones and Marcus Arbery argued against the arrangement. That prompted the judge to toss out the plea deal.

“Ahmaud didn’t get the option of a plea,” Cooper-Jones said.

The judge gave McMichaels and Bryan two weeks to file an appeal.