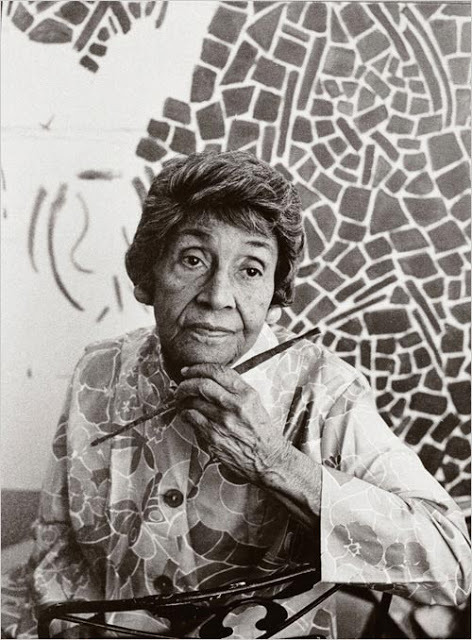 Alma Woodsey Thomas (September 22, 1891 – February 24, 1978) was an African-American artist and teacher who lived and worked in Washington, D.C., and is now recognized as a major American painter of the 20th century. Thomas is best known for the exuberant, colorful, abstract paintings that she created after her retirement from a 35-year career teaching art at Washington’s Shaw Junior High School. For 35 years and in a segregated city, she empowered art students at Shaw Junior High School to see beauty in the everyday and brought exhibition opportunities and cultural enrichment to Black youth.

In 1907, Thomas and her family migrated from Columbus, Georgia, to DC. She earned her Bachelors of Science in Fine Arts in 1924 from Howard, becoming the first graduate from the University’s Fine Arts program, and also “possibly the first African-American woman” to earn a bachelor’s degree in art—or the first American woman of any racial background, as the artist Keith Anthony Morrison wrote that “it was said [in 1924] that she was the first woman in America ever to gain a bachelor’s degree in art.”

Thomas lived in the same family house in Washington, at 1530 15th Street, NW, for nearly her entire life, from 1907 when her family moved from Georgia so she could attend high school until her death in 1978 (aside from a few years in her 20s when she worked elsewhere). Thomas’s home was her artistic epicenter. There, she created small watercolors, aerial landscapes, and brightly patterned large-scale abstractions that reflect her local surroundings and her fascination with space and the environment. She also pursued her interests in performance, puppetry, and fashion.

A leader within her creative community, Thomas shaped the DC art scene through her association with Howard University, American University, and the Barnett Aden Gallery (one of the first Black-owned private galleries in the nation), which she helped co-found. Alma Thomas died on February 24, 1978, in Howard University Hospital, following aortal surgery. 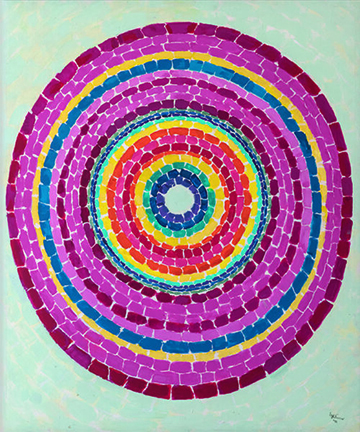 Alma W. Thomas: Everything Is Beautiful

The Frist Art Museum presents Alma W. Thomas: Everything Is Beautiful, a comprehensive overview of the artist’s long, dynamic life and multifaceted career that was defined by constant creativity. Featuring more than 150 works, including her joyful and colorful abstract paintings and many objects that have never been exhibited or published before, the exhibition demonstrates how Thomas’s artistic practices extended to every aspect of her life—from community service and teaching to gardening and dress.

This major retrospective includes thirty-eight canvases spanning 1922–77, more than sixty works on paper, four marionettes, and a range of sculptures, photographs, and ephemera. Co-organized by the Chrysler Museum of Art and The Columbus Museum, Georgia, Everything Is Beautiful will be on view in the Frist’s Upper-Level Galleries from February 25 through June 5, 2022.

“Thomas achieved artworld stardom but considered teaching art to be her greatest legacy,” says Frist Art Museum senior curator Trinita Kennedy. The Frist will highlight Thomas’s thirty-five-year tenure at Shaw Junior High in Washington, DC, by presenting a concurrent exhibition titled Nashville Art Teachers: Beyond the Classroom that salutes the extraordinary art teachers in our own community and their heroic efforts during the challenging circumstances of the COVID-19 pandemic. It features the work of elementary, middle, and high school art teachers working in Davidson County and will be on view in the Conte Community Arts Gallery from March 4 through August 28, 2022.

A full-color, 336-page hardcover catalogue published by the organizing institutions and distributed by Yale University Press opens with a new poem by Ross Gay and features a large collection of new scholarship. The essays incorporate an array of perspectives, including Africana scholar Tiffany Barber on Thomas and performance and self-fashioning and exhibition co-curator Jonathan F. Walz on motion in her art. Other scholarly essays explore Thomas’s classroom activities, her church life, the cultivation of her garden, the context of environmentalism, and more topics. Contributors include exhibition co-curator Seth Feman, Vanderbilt University professor Rebecca VanDiver, and many more. The catalogue will be available for purchase in the Frist Art Museum gift shop.