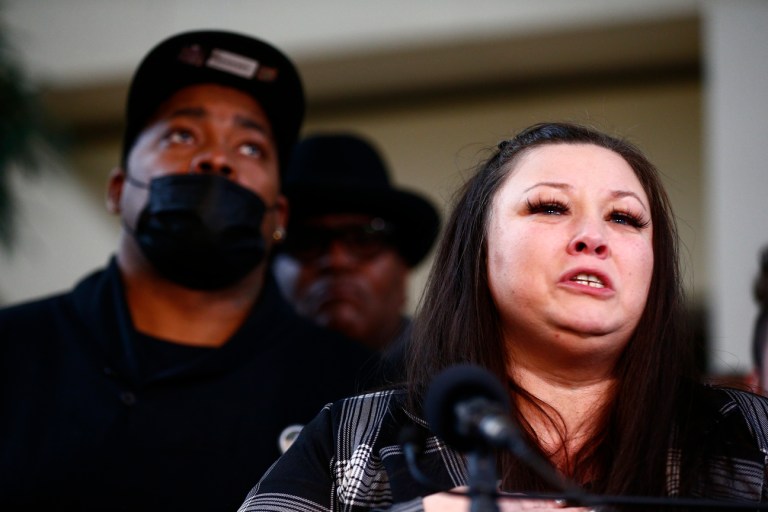 Katie Bryant, mother of Daunte Wright, speaking after the sentencing, as Aubrey Wright listens in the background. (photo by Chris Juhn)

The officer who shot and killed Daunte Wright during a traffic stop in Brooklyn Center in April 2021 was sentenced to two years today, 16 of those months to be served in prison—angering the family of Daunte Wright.

Former Officer Kimberly Potter was found guilty in December on two counts of manslaughter, one of them (the more serious charge) was for the reckless handling of a firearm. Although the prosecution motioned for an upward departure, alleging she endangered others and abused her authority, they apparently backed away in a motion—saying the presumptive sentence of seven years, or alternatively, 10 years of probation, was appropriate.

Even so, Judge Regina Chu said in court that neither of the factors were found as the case prosecutors cited in justifying a higher sentence is different. The case involves a person who was convicted of first-degree assault after shooting a man in a recliner in a Bemidji apartment building where a three-year-old resided.

Chu also said the Potter case was different from Derek Chauvin kneeling on George Floyd’s neck for nine and a half minutes and Mohamed Noor recklessly shooting out of a squad car, killing Justine Damond.

Potter apologized through tears on the stand. “I am so sorry that I brought the death of your son, father, brother, uncle, grandson, nephew, and the rest of your family. To Katie, I understand a mother’s love, and I am sorry I broke your heart. My heart is broken for all of you,” said Potter.

Judge Chu, who is a descendant of Chinese immigrants, said: “This is one of the saddest cases I’ve heard in my 20 years on the bench.” In sentencing Potter, she preached empathy while apparently fighting back tears. “Empathy is a quality of character that can change the world,” said Chu after invoking a quote by former President Barack Obama. “[Potter] never intended to hurt anyone.”

The sentencing stoked further anger among family members, who said they now have trouble sleeping, concentrating and celebrating. “Everything we do as a family ends in tears,” said Daunte’s father Aubrey.

In a victim impact statement, Daunte’s sister Diamond said this hits close to home, as Daunte became yet another victim of police violence. “Me and my mom and Daunte were having a talk, saying maybe we just have enough Whiteness for us not to be a threat to the police. We were wrong,” said Diamond. “We have repeatedly seen that one hint of Black skin makes us a target.”

Daunte’s family also did not believe in Potter’s remorse, citing in victim impact statements that she smiled in her latest mugshot, which could mean she did not regret killing Daunte. But Potter’s defense attorney, Paul Engh, said she was told to do so while her mugshot was being taken.

The anger extended to the mother of Daunte’s son, Chyna Whitaker. “Two years is probably, you know, you might as well just let her walk free,” said her attorney Thomas Powers. In her victim impact statement, Whitaker said she suffers from extreme anxiety whenever she is pulled over, and that their son now suffers from behavioral problems with Daunte not present.

Aubrey Wright and Katie Bryant accompanied their attorneys Ben Crump and Jeff Storms to deliver remarks but were too overcome to answer questions. Katie Wright lamented that her impact statement was all for naught, given the sentence handed down.

“Today, the justice system murdered him all over again. To sit there and watch pouring my heart out in my victim impact statement that took so long to write and I reread it over and over again, to not get a response out of the judge at all. But then when it came down convicting or to sentencing Kim Potter, she broke out in tears,” said Bryant.

Crump criticized Judge Chu’s comparisons to the Noor case, saying, “Many in the Twin Cities believed that Mohamed Noor, a Black police officer, who was convicted of a lesser charge of manslaughter two, received a much greater sentence than this White woman who killed their son Daunte Wright.”

Noor, who was initially sentenced to 12 1/2 years, was recently re-sentenced to 57 months and is expected to enter supervised release next summer when he finishes serving two-thirds of his sentence.

Storms referenced Crump’s comparison of the justice system to the analogy involving the Charles Schultz-created Peanuts comics, where Lucy would withhold the football from Charlie Brown as he tries to kick it. “You know, we saw Derek Chauvin get convicted. We saw Kim Potter get convicted. And so I think we all allowed ourselves to believe a little bit for a moment that there could be an equal justice system for our Black and other communities of color citizens compared to the justice system that rises when someone who is White is killed, particularly at the hands of law enforcement,” said Storms.

Attorney General Keith Ellison planned to deliver remarks but instead opted to send a press release, which read in part, “There is no cause for celebration: no one has won. We all have lost, none more than Daunte Wright and the people who love him. None of us ever wanted Kim Potter to recklessly pull the wrong weapon and kill Daunte Wright.”

The defense sought probation for Potter, citing her as unlikely to recidivate, the need to care for her 82-year-old mother, the toll on her mental health, and how she has received support from colleagues, friends, family, and strangers in the form of stacks of notecards and letters.

“I can honestly say she genuinely cares for everyone she meets,” said Engh.

In addition to the prison sentence, Potter owes a $1,000 fine and a surcharge, to be paid from either prison wages or due in 180 days. She does not yet owe restitution. Potter will no longer be able to own firearms or explosives, must submit a DNA sample, and will receive credit for the time served since she was convicted in December. She is anticipated to be released next April.

At the end of the day, Ellison said he believes the justice system does not work for everyone as is, because we rely heavily on one system for all types of crimes: “Can we finally develop practices of use-of-force that keep all of us truly safe and make none of us afraid? Can we finally transform the relationship between community and law enforcement into one of mutual respect and trust? Can we finally create a justice system that does more than perpetuate the cycle of offense and punishment?”

(This story first appeared in the Minnesota Spokesman Recorder.)