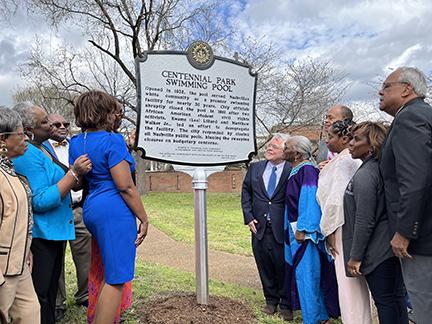 Unveiling of the historical marker at Centennial Art Center, the sight of an important moment in Nashville’s Civil Rights history.

The community joined government officials at Centennial Park to celebrate the unveiling of a historical marker at the Centennial Art Center on Wednesday.

Centennial Art Center played an important role in Nashville’s civil rights history, being part of the catalyst of changing segregation in Nashville.

The facility began as a White’s only swimming pool and bathhouse in the 1930s. In the late 1950s and early 1960s, the civil rights movement rose to prominence. One day in 1961, two young Black men, Kwame Leo Lillard and Mathew Walker, Jr., led a small group to the swimming pool but were denied entry.

Rather than desegregate the pools, the city’s response was to close all swimming pools in Nashville, including its premier pool in Centennial Park. Eventually, the other pools reopened, but the Centennial Park pool and bathhouse remained vacant for 10 years. The unveiling of the historical marker memorializes the people and events that took place in the park in 1961.

“We have actively embraced our past, and this marker will serve as a permanent reminder of what came before and a source of inspiration for generations to come,” said Mayor Cooper.  “This is a celebration of courage, activism, and the leadership Kwame Lillard, Matthew Walker, Jr. and others who fought for justice and inclusion showed.”

In discussing the attempted desegregation of the pool, Evelyn Lillard said: “That was not well received at that time, nor at this time. Even though kids today can go to public schools, we still fight for many kinds of public access.”

In Nicole Walker’s statement, she discussed how her father told her many stories about the civil rights movement and particularly the one from the day that he and his friend Kwame Lillard decided to go for a swim in the pool at Centennial Park.

“He understood that he might have been harmed, but there was a bigger picture,” she said.  “He said: ‘We knew that even if we were denied entrance to the pool, it would put a crack in the hard shell of segregation.’ His actions that day laid the foundation for desegregation in Nashville.”