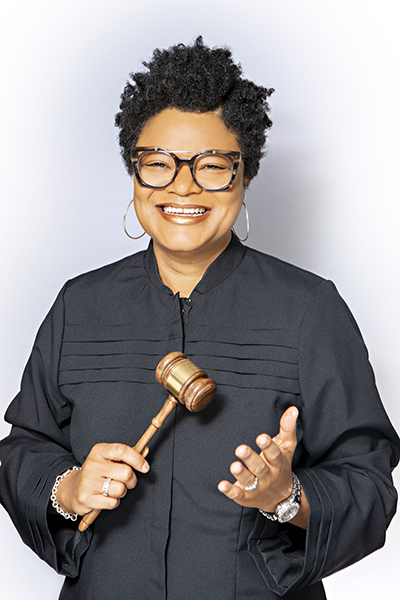 Judge Rachel L. Bell is running for re-election!! Her petition was qualified a few weeks ago and her campaign team is ready.  Early voting is April 13-28 and Election Day is May 3, 2022.  Judge Bell shared, “We are in the home stretch of this campaign, and I call it the 4th Quarter.  I compare my campaign strategy to playing basketball.  It’s in the 4th Quarter you give all you can, play fair and leave it all on the court.  In this case the ballot.”  This is Judge Bell’s 3rd time running for office as she was successfully elected during a special election in 2012 and re-elected in 2014.

Judge Bell has a solid reputation from growing up right here in our community and being amongst the people continuously.  We know Judge Bell’s character and we know her family.  In 10 years, Judge Bell has presided over 191,903 Criminal Cases; 29,415 Civil Cases; 4,836 Mental Health Committals and 8,971 Traffic Cases. During the COVID-19 Pandemic she presided over 2,000 cases that paid out over $11 million dollars to landlords for tenants that could not pay their rent.  This allowed the landlord to be compensated and the tenant to keep a roof over their family’s head. In 2016, Judge Bell commissioned a statue of Justice A.A. Birch to be placed in front of the courthouse. In 2018 was one of 5 courts selected to receive a $200,000.00 grant partnering with the TN Supreme Court to establish the C.A.R.E. Diversionary Court for Ages 18-30 and the Bordeaux North Community Justice Center in Zip Code 37208.

Judge Bell not only serves as a General Sessions Court Judge but started the State of Tennessee’s first Music City Community Court and launched 3 initiatives.  The first initiative was the RESTORE Re-Entry Court for Returning Citizens, where she and her team do trash clean ups throughout the community and an Expungement Clinic, Indigency Docket & Resource Fair.  The second initiative was the C.A.R.E. Diversionary Court for Ages 18-30, this is a pre-trial judgement deferred court that allows individuals to complete the program and have their case dismissed never being faced with a criminal record that will be on their background.  The third initiative was the L.E.G.A.C.Y. Housing Resource Diversionary Court which assist landlords and tenants dealing with non-payment of rent. Judge Bell is meeting people where they are and treating all that come before her bench with dignity, humanity, and compassion. Judge Bell does have a challenger, in Erin Coleman who has previously lost her bid in 2016 for state senate and 2015 council at large.

In today’s climate, we need a person like Judge Bell from our community on the bench that is visible and understands the plight of people that come before General Sessions Court.  It’s the people’s court and Judge Bell is a people person. In an effort to make an equitable court environment she runs her courtroom forward-thinking and uses progressive trends aligning with the rest of the country.

Judge Bell shared, “Before I became a Judge and while being a Judge over the years we keep hearing about Defendants going through a conveyor belt type system and just being rushed through, pleading guilty to charges and not really understanding what is going on. After my first 2 years sitting on the bench, I decided to do something about that. There is a General Sessions local Rule #4, that was enacted in 2009 that allows a first and second call system, where my court clerk and staff check-in defendants, witnesses, police officers, victims and attorneys into the courtroom and ensure each defendant is assigned a lawyer. During this process, there is a line for each case to meet with the District Attorney’s office to see what their plea deal or offer will be for the charges they are faced with.  At the second call, I identify those defendants that have not arrived to court and also take up any ready cases that have been acknowledged by my clerk.

This system is fair and strictly focuses on all parties involved with the case without any distractions. The District Attorney is not being tugged on by other lawyers during cross-examination and the victim & defendant are getting a full and fair hearing.”

Judge Bell is asking everyone to Ring the BELL for Justice and keep her on the bench.  To learn more about her campaign visit, www.judgerachelbell.com